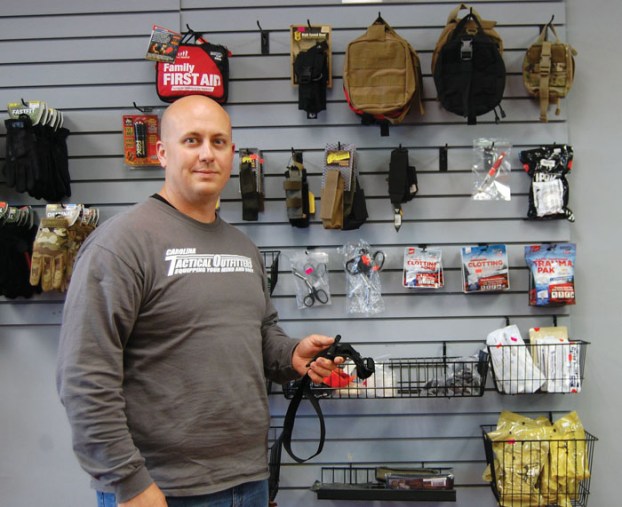 Amanda Raymond/Salisbury Post One of the many products that Aaron Thurston, founder of Carolina Tactical Outfitters at 2162 Statesville Blvd., offers at his recently opened store is medical supplies like tourniquets.

From sheep to sheepdog: Churches consider security in throes of holidays

This question comes from Master Police Officer Ron Ferrell as he leads a place of worship security training in late November. He’s addressing over 150 individuals seeking insight on safety in their churches, mosques and synagogues.

Ferrell’s training fell just three weeks after the Texas shooting that claimed the lives of 26, a tragedy that, for many, aggravated old wounds and fears.

“Church used to be a place that you considered safe,” said Rickey Johnson, pastor for Antioch Missionary Baptist Church in Granite Quarry. “It’s not that way anymore. So much is happening.”

Church security is a growing concern for members of faith, particularly as incidents of mass violence continue to make national news. Worship leaders and worshippers are wanting to know what to look for and how to respond to keep themselves — and their guests — safe.

Dr. Kenneth Lance, pastor of First Baptist Church in Salisbury, said that his concern centered on his guests.

“I’m concerned that those who are spiritual seekers may refrain from coming to a place where they can find spiritual answers because of that overarching fear … in our society that public spaces, especially public worship spaces, may not be the sanctuary that they were once thought to be,” he said.

But what exactly are the largest threats to local congregations? Both Ferrell and local emergency manager and paramedic Aaron Thurston said that the answer may be surprising.

Both report that congregations are more likely to experience medical incidents, fires and natural disasters.

“It’s likely that someone’s going to die of a heart attack and need medical attention before somebody’s going to get shot,” said Thurston.

“Plan for the every day stuff. The medical stuff, the bumps, the bruises, the boo-boos, the heart attacks. Plan for that.”

Outside of his work with Rowan County Emergency Services, Thurston owns and operates Carolina Tactical Outfitters. The store offers “everything from pouches to body armor to new medical supplies.”

Thurston and his business partners offer similar information training to Ferrell’s, as well as individualized security evaluations for places of worship. This assistance is free.

The first step in making a church more safe and secure, he said, is formulating a plan. Plans are unique to each place of worship given their congregational size, their buildings, the physical circumstance of their members and more.

Both Ferrell and Thurston recommend that worship centers implement security teams, individuals who can act on plans in the event of crises.

Worship leaders and these teams should evaluate what will be done and who will do it should problems arise. Ferrell recommends developing plans for the following items:

Action items should be compiled, clearly defined and written into policies that can be evaluated by each worship center’s legal team and insurance provider.

“It’s critical to have a plan for different scenarios before something tragic happens,” Ferrell said.

Ferrell spoke of triage teams, groups of individuals who can help in the event of minor medical incidents prior to the arrival of paramedics, firefighters or police.

Both Ferrell and Thurston suggested designating individuals to monitor parking lots and watch for signs of abnormal behavior. Both placed particular emphasis on keeping children safe, recommending all who work with children undergo background checks.

According to Thurston, concerns about security ebb and flow in response to national, publicized events. Calls for security consultations in churches, he said, started to wane six to nine months ago.

“It’s only a matter of time,” he said. “People are not immune to these types of events. They’re going to happen, it’s just a matter of when and where.”

Churches should therein keep and act on plans at all times, Ferrell said.

“If we don’t adapt, something eventually will happen and then what will you have to do?” Ferrell said. “Instead of acting you’ll have to react.”

Both Antioch and First Baptist have had security teams and plans in place for a number of years. Johnson prepared a plan over decade ago, drawing from experience in his previous church when a stranger stormed the pulpit during the middle of service.

His plan includes designated escape routes and an emergency alert code book. The book includes colored letters that he can covertly show from the pulpit to address issues without causing panic or disrupting the service.

His congregation has access to a community nurse, who monitors blood pressure and can respond to medical needs while waiting on emergency services.

At First Baptist, the security team walks the halls, monitors the parking lots and makes sure children are in their respective places. Their Wee Center, the location of their children’s ministry and weekday childcare center, is kept locked at all times.

Following the shooting in Texas, First Baptist instituted another change. Lance hired an off-duty police officer to be on the church campus during worship times on Sundays and Wednesdays.

“This is a season,” said Lance. “This is not permanent. We’re going to reevaluate this in a few months.”

When considering implementing safety standards, both Ferrell and Thurston say that worship centers should consider the image they want to portray.

Outside, armed presences like police officers are a show of force, Thurston said. Planners should take careful consideration how this could be interpreted by potential attendees.

“That is a risk, but I think it’s going to be a combination of things,” Lance said. “If law enforcement is present and people are inhospitable and are unfriendly, then yes that combination would turn people away.”

Lance said that his decision to hire an armed officer is meant to increase a feeling of safety for both current and potential attendees.

“We are not hunkering down or creating a bunker,” said Lance. “We do want folks, whoever they are, to feel safe. The safety of our guests is just as a important as the safety of ourselves.”

Johnson said motivations were the same at Antioch.

“We try to make service as comfortable as possible,” Johnson said said. “ … It’s a time of fellowship, of friendship. We try to put the emphasis on making a friendly church where everybody’s welcome. That’s what we focus on.”

With the holidays in full swing and attendance in churches and synagogues high, Thurston recommended that worship centers be mindful of anything out of the ordinary.

He encourages a watchful eye for visitors not engaging with those around them, those isolating themselves, or those who ask unusual questions.

Unusual questions include what time the church doors are unlocked, or what exit and entryways can be used to get where.

The best tactic for dealing with these questions? Engaging the person in conversation and answering their questions without sharing too much. Try to find find out why the question was asked, Thurston said.

He also recommends looking for individuals dressed unusually: those wearing heavy coats in the summer, carrying a backpack or having suspicious bulges under their clothing.

For evening services, he recommends having ushers prepared with flashlights, double checking exterior and emergency exit lights, and having first aid kits handy.

Some churches, he said, don’t allow bags or backpacks outside of diaper bags during special holiday services. Bags are not only opportunities to conceal weapons, he said, but they’re trip hazards when scattered amongst pews filled with larger crowds.

Pastors Lance and Johnson say that responses to their safety measures have been positive. The pair agrees: crimes in church have happened for years and across all faiths.

This shouldn’t make church a place one avoids, Johnson said.

Judy Klusman to serve on Cardinal Innovations board

Rowan County Commissioner Judy Klusman has been appointed to the new Cardinal Innovations Healthcare Solutions board of directors. The N.C.... read more