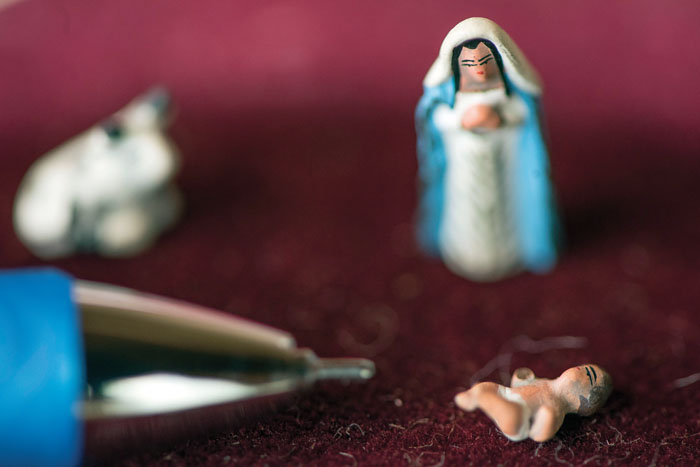 The smallest display is from Columbia. The point of a ink pen is on the left to show size comparison. JON C. LAKEY / SALISBURY POST

SALISBURY — The Center of the Faith and Arts is hosting a special Christmas exhibit this year. Nick Bishop’s creche collection is on display for the first time in nearly 10 years, through Jan. 6.

“It’s an amazing collection from around the world that can generate a lot of interest in the community,” said Andi Cantrell, executive director of the center.

Bishop, of Spencer, says his parents started the collection after World War II. His parents, Kenneth and Ruth Bishop,  were living in Chicago when his father complained about not having a real Christmas because of the absence of a putz house  — the Pennsylvania Dutch term for a Nativity scene.

According to Bishop, his mother was walking down the street when she saw a paper Nativity scene or creche in a store window. She entered the store to discover the creche was only a display, but she talked the owner into selling the piece. On Christmas, she gave the creche to her husband, beginning their ever-growing collection.

After Nick Bishop’s birth, the collection began to grow rapidly because of the network of friends, missionaries and students the family developed. As people traveled, they would buy creches to bring back to the Bishop family. After years of collecting, the Bishop family began to display the creches all around the central East Coast from Pennsylvania to North Carolina.

Today, Bishop’s full collection is around 200 creches, but only 150 are on display at the exhibit. The scenes are created from a wide variety of materials including ceramic, coal, clay, plastic, wood, bamboo, glass, corn husks and palm straw.

Bishop believes the event is a wonderful experience for the community. “You don’t have to be an art expert to enjoy the creches, since most of them are folk art,” he said.

The creches are not organized in a specific order, but it works to the advantage of the exhibit. Creches differ according to the country and religious background from which the piece originates, so the seemingly sporadic order allows viewers to see the differences between creches and cultures.

For instance, the animals present in the scenes differ by the region from which the creche originates. In African creches, sheep and camels are present, while in South American crèches, llamas and goats are more common. The bed that Jesus rests in changes from creche to crèche, as well. Baskets, mangers, a cloth on the ground, or wrapped in Mary’s arms are all depicted within the various creches.

In addition to region, different denominations of Christianity influence the creches as well. The Catholic-influenced creches usually include angels in the scene, while Eastern Orthodox creches concentrate on the wise men’s arrival.

The differences between the creches are countless and demonstrate how a classic story can have different interpretations based on the region and religious influences. From Japan, this creche has the baby Jesus in a round basket.
JON C. LAKEY / SALISBURY POST

Bishop loves the diversity of his collection and believes it’s the most attractive aspect of the exhibit. He said, “The exhibit is here to explore what catches your eye and intrigues you.”

The exhibit is open every Tuesday and Wednesday from 3 to 6 p.m. up until Christmas, but groups are welcome to call the Center of the Faith and Arts to arrange an alternative time to view the exhibit. Bishop is available for personal tours, as well.

The Center of Faith and Arts has scheduled multiple special events associated with the exhibit.

On Dec. 24 from 6 to 8 p.m., the creche exhibit will be lit with only candles to create a meditative atmosphere for viewers.

The center will have a final open house on Jan. 6 before closing the exhibit for the season. Characters from a nativity made in Zimbabwe is made from palm leaves.
JON C. LAKEY / SALISBURY POST