Christmas in the Grove brings about family fun 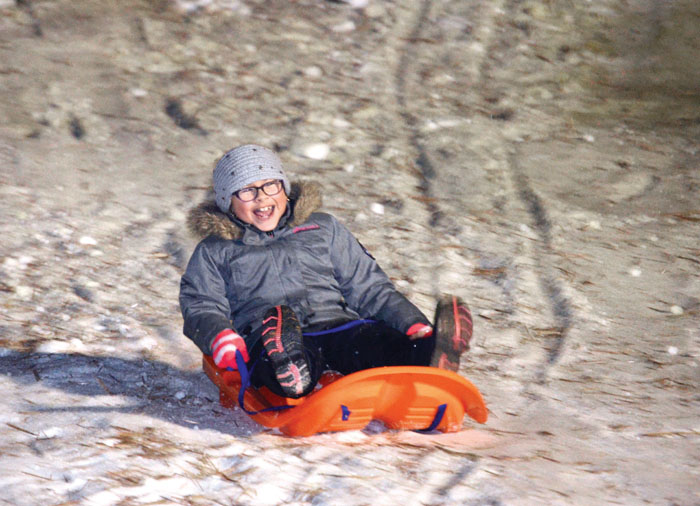 Andrea Moravska, 7, excitedly screams as she slides down the hill during the Christmas in the Grove event held Saturday in downtown China Grove. Shavonne/Salisbury Post

CHINA GROVE —”Watch out buddy,” Jeff Turgeon called out to a child racing down a hill on a plastic sled as tuffs of snow billowed into the air around him. Although it was cold Saturday night in Rowan County, it wasn’t quite cold enough for snow, except in China Grove.

Hundreds of people desceneded upon downtown China Grove for its annual Christmas in the Grove event where folks took off on sleds down a snow-covered hill located adjacent to the China Grove Police Department.

The outing was a last-minute decision for Turgeon and Jennifer Matheson as they decided to bring their children for sledding. They drove from Mooresville to the China Grove event with their children Brooke, 9, and Bradley, 12, and their children’s friends. It was their first time attending.

Turgeon and Matheson saw the event posted on Facebook around 5:30 p.m. and a short time later they were in downtown China Grove at the bottom of a hill taking pictures and video of their children flying down a snow-covered hill.

Tamia Butler, 12, and her best friend Raquel Conde, 10, made multiple trips down the hill on a sled. While tumbling down the hill, the girls, out of breath, exclaimed they were going back again.

Kirt Casper brought his family to the event, which he said makes their children feel as though Christmas is just around the corner. He said they bring the children every year.

“We start Thanksgiving Day with a fresh cut tree but once we come out here we start counting,” he said of the days left until Christmas.

The family took their sleds down the hill, roasted marshmallows and had plans for the horse and carriage ride.

Youngest daughter Dixie, 5, said sledding was her favorite part. Children Ryell, 13, and Korbyn, 12, also joined in on the festivities.