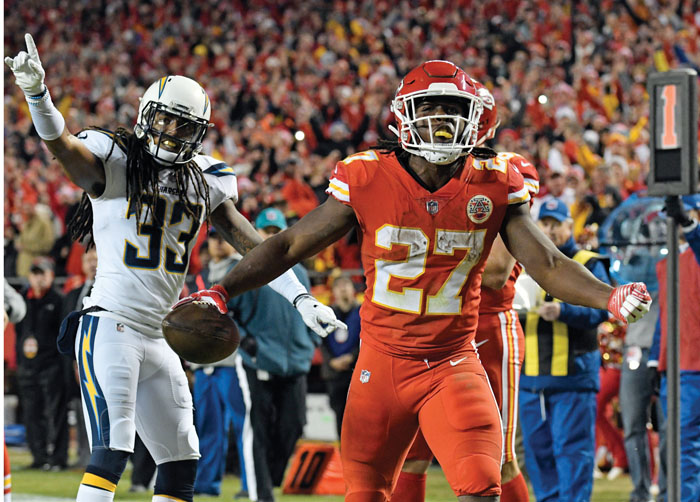 Hunt also had a TD catch for the Chiefs (8-6), whose eighth straight win over the Chargers all but sewed up the division and a spot in the playoffs. The only way Kansas City can squander it is by losing its last two games and the Chargers or Oakland Raiders winning out.

The Chargers (7-7) led 13-10 early in the second half, but Philip Rivers threw three interceptions — two of them to Marcus Peters — and Austin Ekeler coughed up a fumble down the stretch.

That ended their four-game win streak and quite possibly their playoff hopes.

Rivers finished with 221 yards passing and a touchdown, but has thrown 13 interceptions during the Chargers’ losing streak to the Chiefs. Melvin Gordon added 78 yards rushing and a score.

The game shaped up as a matchup of teams going in opposite directions: The Chiefs were 5-0 before watching their division lead waste away, while the Chargers started out 0-4 but won seven of their next nine to forge a near-winner-take-all divisional showdown at Arrowhead Stadium.

Instead, the Chiefs looked like they did in their Week 3 win over the Chargers.

So did the Chargers, for that matter.

The Chiefs’ defense, which played so salty last week against Oakland, was buoyed by the return of Peters from a one-game disciplinary suspension in helping to build a 10-6 halftime lead.

Rivers soon got on track, going 5 for 5 for 88 yards on his first drive of the second half. And his 10-yard touchdown pass to trusty tight end Antonio Gates gave Los Angeles its only lead.

One that didn’t last very long.

The Chiefs answered with a methodical, 69-yard scoring drive of their own. Hunt supplied most of the work, and he capped the drive by catching Smith’s short TD toss to give the Chiefs a 17-13 lead.

Two plays later, Rivers floated a pass downfield and Peters leaped up to make an easy interception, and his long return set up first-and-goal at the Chargers 6. The Chiefs nearly turned it into another TD when Smith found Hunt again, but the tip of the ball hit the turf for an incompletion.

The Chiefs’ challenge failed and Harrison Butker knocked through a field goal for a 20-13 lead.

The Chargers’ offense, which had committed just six giveaways over the last nine games, coughed it up again three plays later. Peters helped to pry loose the ball from Ekeler, and Butker tacked on a 51-yard field goal a short while for a comfortable cushion.

Rivers threw two more picks in the fourth quarter, giving him six in two games against Kansas City this season, and ending any hopes of Los Angeles mounting a comeback.

Chargers LB Denzel Perryman left with a hamstring injury late in the first half. S Adrian Phillips left with an ankle injury early in the second. DT Corey Liuget (knee) and LT Russell Okung (groin) also went down in the second half. … Chiefs LB Kevin Pierre-Louis (shoulder) and DL Jarvis Jenkins (elbow) left with injuries in the third quarter.

Chiefs try to clinch the AFC West against the Dolphins next Sunday.