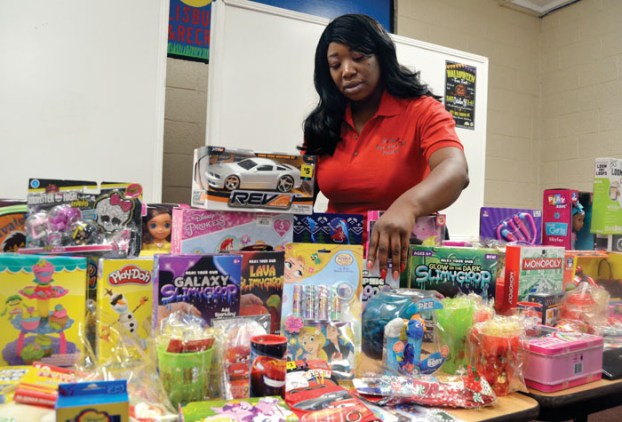 SALISBURY — Cecelia McKoy Graves made plans to decorate her Christmas tree with her family on Saturday night. She’d wanted a tree for her family, but up until Saturday had not gotten one. She won the tree at the Born Leader Club Inc. Community Christmas Festival.

This is the second year for the annual event, which was held at Hall’s Gym on West Bank Street. There were giveaways and presents for every young child who attended along with free clothing items, free food and other activities, including cookie decorating.

She’d heard about the event through a volunteer with the Thelma Smith Foundation, an organization whose volunteers were in attendance and helped organize the event.

“God is good,” she said of getting the tree.

The tree was provided by the Salisbury Police Department. Graves was given a ticket by new friend Shante Gillespie.

Gillespie had a raffle ticket for the tree and overheard Graves say she didn’t have a tree, but would like to win it. She handed over her raffle ticket and it was the winning ticket. Later on during the event, Graves paid it forward and turned over her ticket to Gillespie for a gift card raffle.

The event was the brainchild of Ola Nwafor, founder of the Born Leader Club Inc., a local mentoring program. She held her first event and this year was able to get help from a number of other local organizations for an even bigger festival.

“Everything was donated. All of these organizations came together,” Nwafor said.

The nonprofit mentoring program focuses on middle school-aged youth and aims to provide them with positive role models.

“We are trying to unite the community so all these different organizations can work together,” Nwafor said.

Born Leader Club mentor Jamie McKnight said she wanted to be a part of the organization because someone mentored her and “it was one of the ways of giving back. It’s been wonderful…kids are eager to become leaders.”

McKnight helped facilitate the presents which were set up in a room. Each child got to pick out a gift they would like.

“I think it’s a nice thing. It gives them something to look forward to,” said Janice Perry, who brought her grandchildren and a niece.

There was also entertainment at the event including performances by the Marching Tigers Drill/Dance Team as well as Triple Threat Dance & Charm. The Salisbury drill team is newly formed.

“God has been good to me and I don’t mind giving back,” said Shirley Foust, administrator for the Thelma Smith Foundation.

By Spencer Dixon For the Salisbury Post SALISBURY — The Center of the Faith and Arts is hosting a special... read more