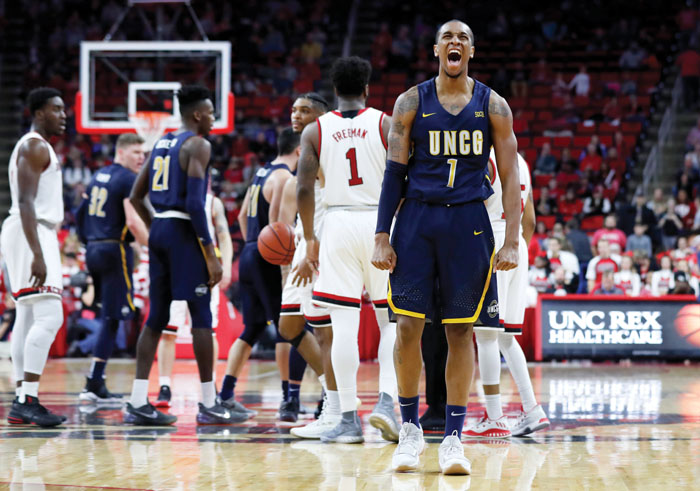 RALEIGH, N.C. (AP) — First, UNC Greensboro erased a big lead. Then the Spartans held on to one of their own for a milestone victory.

Marvin Smith Jr. added 16 points and 10 rebounds for the Spartans (8-3), who rallied from a 14-point deficit in the first half.

UNCG picked up its first win against N.C. State in 11 tries and improved to 3-59 all time against teams from the Atlantic Coast Conference.

“To come in and win a game against an ACC opponent is a big deal for our program,” UNCG coach Wes Miller said. “We’re really proud of that. We think it’s something that we can build on moving forward.”

The Spartans wiped away N.C. State’s big first-half lead with a 14-1 run, and they opened the second half with a 20-3 spurt to seize control.

N.C. State trailed 79-76 in the closing seconds, but Allerik Freeman turned over the ball before the Wolfpack could try to tie the game.

“The most important thing that we did as a team is stay together and continue to fight,” Smith said. “Our will to win was just unmatched.”

Johnson was suspended indefinitely for “a violation of the Student-Athlete Code of Conduct,” according to a statement by N.C. State.

Braxton Beverly and Lennard Freeman added 16 points each for the Wolfpack.

UNCG: The Spartans showed that they are ready for more success after posting 25 wins a year ago. They played harder and smarter than N.C. State, which should give them confidence as they head into Southern Conference play.

N.C. State: The Wolfpack suddenly have some questions to answer as they approach the start of conference play. The length of Johnson’s absence is unknown, and N.C. State used only seven players against the Spartans. Beverly and Allerik Freeman each played 40 minutes. “The letup is just disappointing for all of us because we feel like this is a game that we should have put away in the first half,” forward Abdul-Malik Abu said. “But here we are.”

Smith shot 7 of 12 from the floor, helping the Spartans shoot 52 percent as a team. He ignited UNCG’s run in the first half with a putback and 3-pointer on back-to-back possessions, and he made a backdoor layup to give the Spartans their first lead of the game at 35-34 with 2 minutes left in the first half.

“I thought Marvin Smith played the best game of his career,” Miller said. “He’s had better stat lines before, but was just engaged in every single possession.”

Johnson wore warmups as he sat on N.C. State’s bench during the game. He had started all 10 games this season, averaging 8.7 points, 6.6 assists and an ACC-leading 2.4 steals per game. N.C. State coach Kevin Keatts offered no timetable for Johnson’s return and did not agree with the notion that the team missed him.

“I wouldn’t call it troubling,” Keatts said. “We were able to put a team out on the floor. Listen, I’m not going to make an excuse because we didn’t have a young man play.”

UNCG made 12 of 24 3-point attempts. . The Wolfpack shot 38.5 percent in the second half after shooting 62.5 percent in the first half. . N.C. State’s 20-game home winning streak against nonconference opponents ended. . Abu started for the first time this season in Johnson’s absence.

UNCG hosts UNC Asheville on Tuesday in the final game of a four-game stretch against in-state opponents.