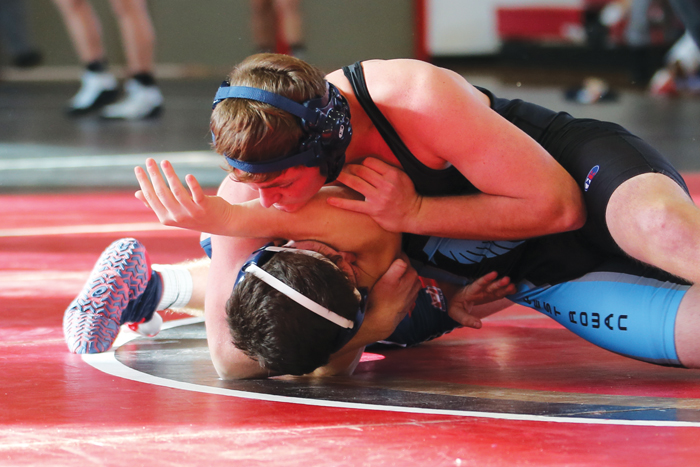 SALISBURY — Nearly three decades in the making, it was entirely worth the wait for West Rowan’s wrestling team.

North Rowan (93), South Rowan (84) and defending champion Carson (84) rounded out the field, but West’s conquest was secured before the championship round. The Falcons enter the finals with an insurmountable 86.5-point lead in the team standings and had 11 wrestlers vying for crowns.

“I told them if we wrestled hard and wrestled smart there was a pretty good chance we could win it,” said fourth-year West coach John Brown. “I looked at the rest of the county and told them, ‘If we do our part, we could have a whole bunch of you in the finals.’”

West claimed three champions — Link at 182 pounds and twin seniors Luke and Lane Bolmer at 145 and 152, respectively. Link, who last wrestled competitively as an eighth-grader, had the day’s quickest pin and was selected Most Outstanding Wrestler.

“I definitely didn’t think I’d win this,” he said, displaying the plaque after stopping East’s Mateo Ramirez in 17 seconds. “I wasn’t even going to wrestle this year but my buddies talked me into it. I like these dudes.”

Those dudes are the Bolmers — and their influence proved decisive. Link’s inclusion gave the Falcons a solid, top-to-bottom lineup.

“We knew weeks ago we’d have a good chance today,” said Luke Bolmer, a 7-0 winner against East freshman Oren Bost. “We’ve been working hard in practice and we’re strong in every weight class. We don’t have a weak link at all.”

Brown indicated Luke fought an intelligent match and added: “He probably could have pinned that kid, but why risk it? We had already clinched the championship and he wrestles dangerously sometimes, but he just did what he had to do. He was trying to be careful.”

The Heart Trophy — if there was such a thing — would have gone to Lane Bolmer. Less than three years removed from a near-fatal car accident, he pinned Salisbury’s Vincent Clauss in the semifinals and East’s Tayron Frost for the blue ribbon.

“I got it over with pretty quick,” Lane said after flattening Frost in 1:53. “I don’t like to wrestle very long because my cardio isn’t very good. So anything he gave me, I ran with.”

Brown was cool with that. “You’ve got to let him wrestle the way he wants to,” the coach said. “That’s the way he does it.”

Link barely broke a sweat against Ramirez, a sophomore with 10 victories this season. “I had it all planned in my mind,” he said. “The barnyard is my best move, so I was going to go out there, barnyard him and then pin him.”

It seemed to go according to script for West, which also received consolation-round wins from Devon Pena (113) and Jaquan Turner (285). Eight Falcons earned second-place ribbons.

“You get that many points, you must be getting pins,” said East coach Chase Burris. “They showed up and worked hard today. They’ve got young kids, athletic kids, kids who don’t give up. That’s an outstanding team.”

Carson’s Josh Vega (120) and Salisbury’s Tim Boyd (132) each won their third county championship. Vega quickly discovered an advantage he held over Lloyd Hilton of Salisbury and used it to record a pin in 2:35.

“My first takedown — as soon as the match started, I had him,” Vega said. “He left his left side vulnerable and I was able to hit a duck-under. Right from that point, I knew I’d beaten him mentally.”

“Winning this three times is an accomplishment,” Boyd said. “I came in as a freshman and won it all. I came back as a sophomore with a target on my back. This year I knew I had to give it my all.”

Boyd held a 6-3 lead when he stopped Adkins. “He kept pressuring with his shoulder, giving it right to me,” he said. “I thought for sure he’d correct it, but he never did.”

“He was equally as strong as I was, but he wasn’t as fast,” Smyre said. “He knew how to counteract when I ran my half, so I needed a new strategy — I tired him out.”

Lambert, currently ranked No. 2 in the state, need 5:10 to put West’s Gavin Coffield on his back.

“I was surprised,” Lambert said after improving to 13-0. “I didn’t expect him to be as strong as he was. He had really good wrist control and could get his shots in. I finally felt what he was trying to do and knew how to respond. I put the legs in and halfed him over.”

West also prevailed in the first Rowan County Tournament in 1987. A measles epidemic wiped out the ‘88 affair before the Falcons “repeated” a year later.