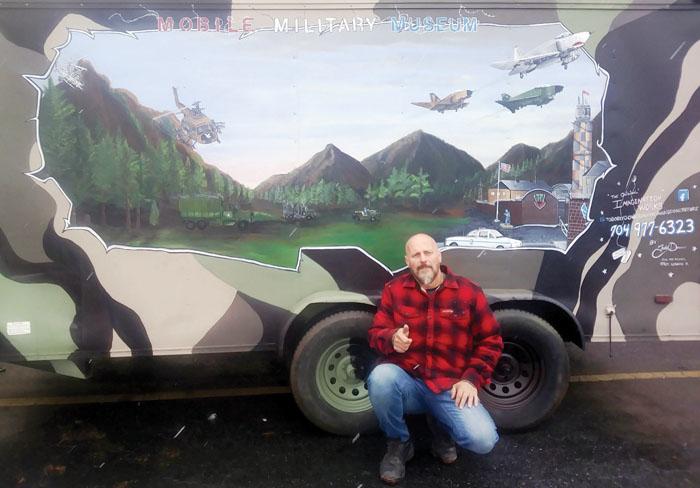 Todd Donahue is shown with the mural he painted at its unveiling held Saturday at the I-40 Flea Market in Statesville.

Donahue, a lifelong artist, drafted the design and used outdoor acrylic paint for the 15-by-7-foot mural. Over the course of a month, Donahue invested about 268 hours of work in the project, he said.

“I love what I do, but the best part is seeing people’s faces when it’s done,” Donahue said.

The mural depicts an Air Force base scene — one of Donahue’s imagination — reminiscent of former Air Force Staff Sgt. Phillip Leonard’s time in the service. Donahue included elements such as a patrol car, security officer, and watch tower as an homage to Leonard, who served at multiple commands worldwide as an Air Force security policeman, also known as a base patrolman.

“I’m tickled to death with the thing,” Leonard said of the mural, which was completed last week. “It just blew my mind.”

Slated for its debut in May at the Price of Freedom Museum in China Grove, Sgt. Leonard’s Mobile Military Museum will feature relics and memorabilia from numerous eras, conflicts and campaigns throughout American history.

Leonard plans to bring the museum to local military-themed programs and veteran appreciation services and to area schools, churches and organizations by request — free of charge.

Leonard, a retired detective with the Salisbury Police Department who lives in Salisbury, is the owner of Sgt. Leonard’s Military Surplus housed at the I-40 Flea Market in Statesville.

Leonard collects and accepts donations of military items for his store and museum. For more information about the store or to learn more about the mobile military museum, go to Facebook.com/SgtLeonardSuplus/ or call 704-245-4815.