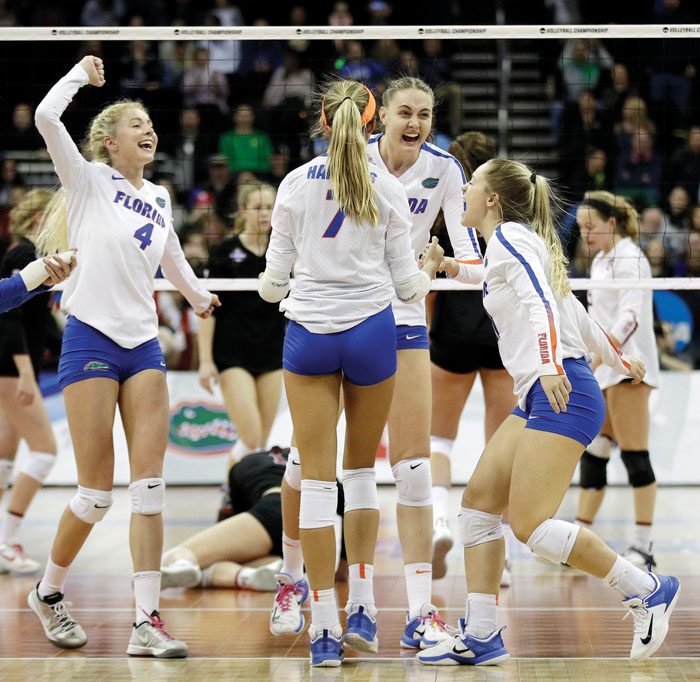 KANSAS CITY, Mo. (AP) — There is very little these days that can dampen the mood of Florida coach Mary Wise, whose Gators knocked off reigning national champion Stanford in the NCAA volleyball semifinals.

Not the daunting challenge of now facing Nebraska, a four-time champion. Or knowing that the Huskers have won 19 straight matches, including a semifinal victory over top-seeded Penn State. Or the pressure that her Gators face trying to win their first championship after eight semifinal appearances.

Wise even managed to put a positive spin on playing at Sprint Center in downtown Kansas City, where thousands of Nebraska fans made the short drive south to paint the building red Thursday night.

“Their fans, their program — they get a whole lot of credit because they’ve been the standard-bearer for years in terms of attendances,” she said. “It’s going to be a really fun environment.”

It’s not as if the Gators don’t have reasons to be confident.

For one thing, they’ve been steeled by the pressure of five-set matches, winning all four of them this season. That included their match against the Cardinal, when the Gators (30-1) took the opening two sets, then withstood a rally by taking the decisive set 15-10 to advance.

Then there’s the confidence that comes with having already beaten Nebraska this season.

The two met the opening weekend of the season with the Gators beating the Huskers in a five-set thriller at the VERT Challenge on their home court. But that comes with a caveat that the Huskers’ star setter, Kelly Hunter, was injured and unavailable.

“Our theme has kind of been, ‘We’ve found a way to win,’” said the Gators’ Rhamat Alhassan, who had 17 kills in the semifinal. “That’s been the theme throughout the entire tournament.”

Yes, the Gators have found a way to win. But so have the Huskers.

The tournament’s fifth seed swept through the first three rounds before knocking off No. 4 seed Kentucky on the road to reach the Final Four. Then in the semifinals, the Huskers dropped the second and third sets and were on the brink of elimination when they rallied to take the fourth set 28-26, and then used that momentum to take the decisive set 15-11.

The Huskers (30-4), in the Final Four for the third straight year, are trying to follow up the title they won two years ago in Omaha.

And while they had a massive home-crowd advantage that year, they figure to have a similar advantage just a couple hours’ drive south on Interstate 29.

“Our crowd is a big, important part of us,” Nebraska outside hitter Mikaela Foecke said, “and having so many Husker fans here is great, and seeing them representing and cheering us on is something really special because we have such a great following.”

Still, the Huskers know that nobody in the crowd is going to log a kill. Or make a block. Or deliver an ace at a crucial time. It’s up to them to take care of business against the Gators.

“Regardless of what happens in the finals, this team will go down as a legendary team in the chronicles of Nebraska volleyball history,” Cook said. “Those guys have done an amazing job, and like I said, they’ll be legends. They’ll be talking about this team for a long time.”