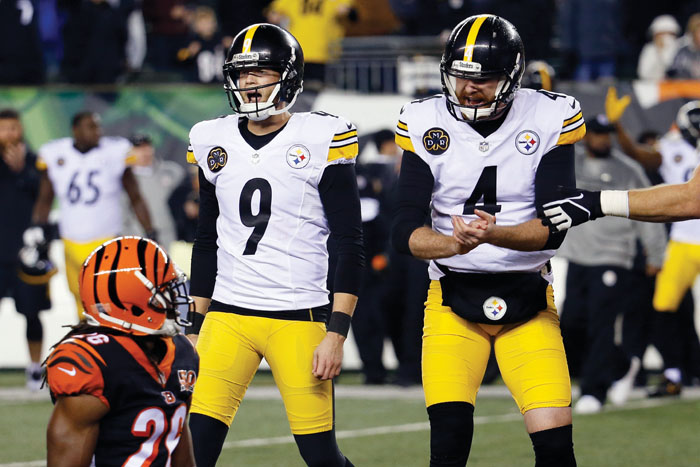 FILE - In this Dec. 4, 2017, file photo, Pittsburgh Steelers kicker Chris Boswell (9) celebrates his game-winning field goal alongside punter Jordan Berry (4) in the second half of an NFL football game against the Cincinnati Bengals, in Cincinnati. The latest addition to Pittsburgh's "Killer Bs" was out of work entering the 2015 season. Now Chris Boswell is arguably one of the best kickers in the game. Look at his four game-winning field goals this season for proof. (AP Photo/Frank Victores, File)

PITTSBURGH (AP) — Danny Smith wasn’t just looking for somebody who can kick. A lot of guys can kick. The Pittsburgh Steelers special teams coordinator was searching for something more on that raw fall day at Heinz Field two years ago.

Over the course of an hour or so, Kai Forbath, Randy Bullock and Chris Boswell went through the paces, doing what they could in cold and wet conditions in a notoriously difficult stadium that makes their job tricky at best and nightmarish at worst. When it came time for Smith to make his recommendation to head coach Mike Tomlin, the deciding factor wasn’t necessarily performance but potential.

Smith opted for Boswell, who’d bounced around four different clubs but always seemed to finish runner-up. Not this time.

“I wanted to take a guy that wasn’t scarred,” Smith said. “The other two had been, not in a negative sense … but I just thought it was time to go with a guy who wasn’t scarred, develop him, teach him, mold him, and it worked.”

The tall, quiet athletic Texan who won Smith over was on the verge of looking for another line of work in 2015 when the Steelers called looking to settle an unsettled position shaken by an season-ending injury to Shaun Suisham followed by a month’s worth of meh from Josh Scobee.

Two years later, Boswell is one of the reasons Pittsburgh (11-2) is tied for the NFL’s best record going into Sunday’s showdown with New England (10-3). The Steelers have ripped off eight straight victories over the last two months, four of them coming courtesy of game-winning kicks by Boswell in the final minute of regulation, three of them on the final snap.

While Boswell insists he’s just doing his job, there’s more to it than that. He’s made 90 percent (45 of 50) of his field goals at Heinz Field, including all 21 he’s attempted this season. The most notable among them a bending 53-yarder against Green Bay two weeks ago that provided the final margin in a 31-28 victory. Boswell didn’t offer any sort of range to Tomlin before Pittsburgh’s final drive, and Tomlin didn’t ask. Boswell didn’t focus on the distance but making sure he could get the proper footing, never a guarantee on turf turned into a choppy maw from three hours of trampling.

The kick was good all the way, tucking inside the left upright as time expired. One celebratory headbutt with punter/holder Jordan Berry, and Boswell found himself mobbed at midfield.

“If you watch it on the film, it curves almost half the width of the whole goal, which is quite a lot,” Berry said. “It’s probably one of the best kicks I’ve ever seen anybody make.”

Not that Boswell wants to talk about it much. On an team that features Ben Roethlisberger, Antonio Brown and Le’Veon Bell, Boswell figures the best he can do is not mess it up for everyone else.

Certainly not the pressure, maybe because Boswell does a pretty good job of occupying himself until the moment arrives. He admits he will intentionally get himself playfully worked up over something that has nothing to do with the stakes.

Maybe it’s a teammate’s helmet that got inadvertently plopped into Boswell’s spot on the bench or the sea of cameras that seem to surround his kicking net when the clock is ticking down and it becomes apparent the thin line between victory and defeat will rest on the powerful right leg at the bottom of his wiry 6-foot-2 frame.

“It’s always something else that’s got absolutely nothing to do with the game so when he goes out there to kick he’s just kicking the ball,” Berry said.

Something Boswell is doing as well as anyone in the league right now. His 32 field goals rank second in the league and are two behind Norm Johnson’s club record set in 1995. Boswell remains fresh thanks in part to Smith’s regiment that only requires Boswell to kick twice during the week. He also doesn’t spent too much time on the field during pregame trying to see how far out he can go on a given day. If he makes a 40-yarder with plenty to spare, he knows he’s good.

The guy who graduated from Rice in 2014 with a degree in sports medicine and had given himself until the end of the 2015 season to land a full-time NFL gig is now likely headed to his first Pro Bowl. Asked what he’d be doing if he wasn’t trying to help the Steelers win a seventh Super Bowl, Boswell shrugs his slender shoulders.

“Personal trainer, coach, something around sports,” he said. “I don’t think I could go to an office or a desk job. I can’t sit still for that long.”