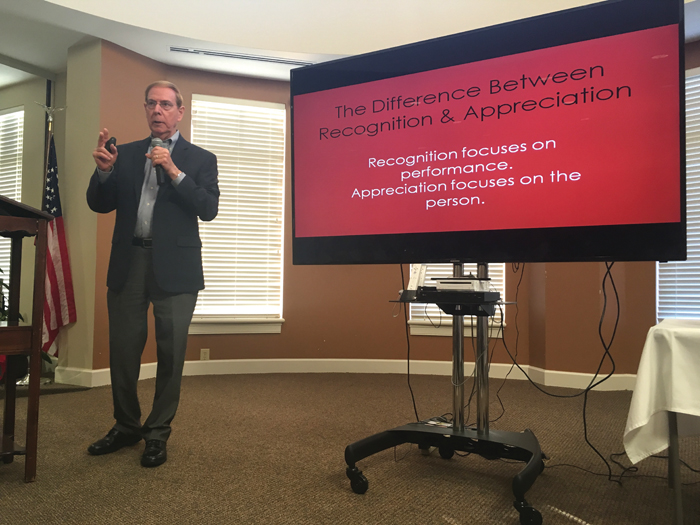 SALISBURY — Most people know author, counselor and China Grove native Gary Chapman as the author of “The Five Love Languages.”

But that’s not what he came to talk about Thursday at the Rowan Chamber’s December Power in Partnership breakfast.

“Through the years,” Chapman said, “I’ve had so many people come up to me and say, ‘Gary, I know you wrote that original book for married couples. But I’ve been using that concept at work, and it’s really, really helping.’”

That feedback eventually led him and his co-author, Paul White, to write a book that incorporated the “love languages” concept into a workplace format: “The Five Languages of Appreciation in the Workplace.”

He asked the chamber audience to think about a question: “On a scale of 1 to 10, how much appreciation do you feel coming from your immediate supervisor?”

“Now if you happen to be the supervisor, you might turn that around and ask yourself, ‘I wonder what my people would say if they had to answer that question?’” Chapman said.

He said that in the course of researching their book, he and White found that 70 percent of American workers say they feel little to no appreciation from the people they work with.

“That’s astounding,” Chapman said. “And 64 percent of the people who leave a job and go to another job say they left primarily because they didn’t feel appreciated.”

When employees don’t feel appreciated, he said, they stop feeling connected with the mission of the organization they’re working for.

From there, they begin to get discouraged and complain to their co-workers. Eventually, they look for another job.

“The fact is that many managers feel that they are expressing appreciation. … The question is, do your people feel appreciated?” Chapman asked.

Like love languages, every person has a different language of appreciation, he said.

“If you simply use words to affirm your people and that’s all you ever do, you’re hitting about 40 percent of your people. And 60 percent do not feel appreciated. So we have to individualize it,” Chapman said.

He then went through the other four languages of appreciation: quality time, acts of service, tangible gifts and physical touch.

Physical touch, he said, “is the one we always got pushback (on) from HR people.”

“Now, obviously, there’s inappropriate touch in the workplace. We don’t have to wonder about that; watch television,” he said.

But he said there are a few appropriate types of workplace touch, like high-fives, fist bumps and handshakes.

In his and White’s research, they discovered that virtually no one listed physical touch as their most important language of appreciation.

Acts of service can be anything from getting someone coffee to helping him finish his work.

He cautioned that if you’re going to help a fellow employee, “check your attitude” before you offer.

“Because sometimes we see a fellow employee, you know, we think is kind of slacking. They’re not getting their job done. And it affects us and our job. So we resent them and we go offer to help them because it’s going to help us. And that’s not appreciation,” Chapman said.

Tangible gifts are also not usually a person’s most important language of appreciation, he said. But if you’re going to give someone something, “give gifts that they value.”

Chapman said some of the most appreciated employee gifts, according to his and White’s research, are tickets to sports events or spa packages.

What employees give to others, request of others and complain about to others is usually what is important to them, he said.

“The complaint reveals the appreciation language,” Chapman said. “If, for example, you hear someone say, ‘You know, I never please anyone around here,’ they’re complaining that they don’t get words of affirmation.”

Chapman is senior associate pastor at Calvary Baptist Church in Winston-Salem. He lives in Winston-Salem with his wife, Karolyn, and has two adult children and two grandchildren.

His book “The Five Love Languages” has sold more than 11 million copies in English and has been translated into more than 50 languages.

The Rowan Chamber of Commerce Power in Partnership breakfast was sponsored by Rowan County not-for-profit organizations.