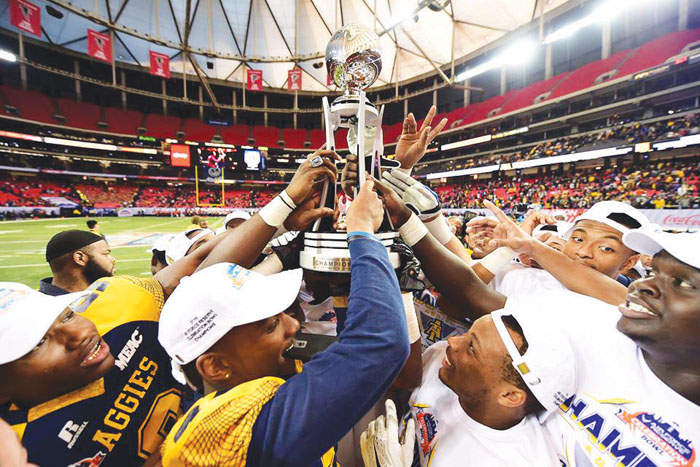 HBCU Sports.com ... N.C. A&T players, after their Celebration Bowl victory over Alcorn State in 2015. After a two-year wait, the Aggies will play in the game again on Saturday in Atlanta, taking on Grambling in the new Mercedes-Benz Stadium.

That’s how many Grambling State University has accumulated this season.

Hester, a  Salisbury resident who coached at Catawba College for 17 years, reports no sleepless nights because he has left tackle Brandon Parker on his side. Parker and his line mates allowed only 10 sacks in 11 games.

If you haven’t heard of Parker  yet, you will when the NFL draft rolls around next Spring. People remember Parker as a so-so basketball player at A.L. Brown High, but he’s developed into a monster in college, at least on the football field. He’s been named the top offensive lineman in HBCU football and he’s the first two-time Associated Press All-American in program history. He’s been the offensive lineman of the year in North Carolina A&T’s league, the Mid-Eastern Athletic Conference, three straight seasons. He was the MEAC’s lineman of the week seven times as a senior.

“Offensive lineman of the year is an award that’s usually reserved for a senior, so for Brandon to win it three straight years speaks volumes about him,” Hester said.

A lot of NFL scouts showed up at North Carolina A&T last year to check out running back Tarik Cohen, now an impact rookie for the Chicago Bears. Hester said twice as many scouts have appeared to evaluate Parker.  Not just scouts, but front office people. Scouts stay close-mouthed because they don’t want to provide information for rivals, but Hester expects Parker to be chosen as high as the second round and no lower than the fifth.

“Those scouts do their homework, and they usually talk to me and to our offensive line coach and our strength coach,” Hester said. “They like Brandon’s size (between 6-7 and 6-8 and 300 pounds), they like his long arms, and they like his great feet. They’ve left here with the impression that he’s not only a great young man, but that he’s a lot more physical guy than they expected.”

After his coaching tenure at Catawba ended (he was an assistant for six years, head coach for 11), Hester was working as Catawba’s director of athletic development in the spring of 2014. It was gratifying work, but his passion still was coaching football. Only in his mid-40s, he knew he had productive coaching years left in him, and he was on the verge of expanding his search for a coaching job outside the state’s borders. He was ready to relocate a family (wife Trish, daughters Morgan and Tori) that understood he loved coaching football even more than he loved Salisbury.
The call from North Carolina A&T head coach Rod Broadway came shortly after the Hesters had decided in a family meeting to give it a few more weeks. Broadway, a West Stanly High School grad who had starred on the defensive line at UNC in the 1970s, needed a receivers coach. Hester had been recommended.

“It was very spur of the moment — it’s not like I went through an interview process — but I did know Coach Broadway had a great track record,” Hester said. “It moved quickly. Trish was all for it. My oldest daughter, Morgan, was fired up. She wanted me to get back into coaching. She knew I missed it.”
Hester accepted the job offer. Since then, he’s made the hour commute to Greensboro to work for Broadway. His philosophy is the same one that made him so respected at Catawba. He sees his job as helping young men become better sons, husbands and fathers, not just better football players.

Hester served as receivers coach for the Aggies in 2014. He moved up to offensive coordinator in 2015, the year the Aggies won the inaugural Celebration Bowl. That’s the HBCU (Historically Black Colleges and Universities) national championship game that pits the MEAC champ against the kingpin from the other HBCU Division I league, the Southwestern Athletic Conference.

The big question for the Aggies this season was finding a way to replace Cohen, the MEAC’s offensive player of the year three times. That obstacle was not insurmountable.

“We knew how special Tarik Cohen was as a football player and we all believed he would be successful if he got an opportunity in the NFL,” Hester said. “But I believe that we’re even better on offense this season. When you’ve got a guy like Tarik sometimes everyone else is just standing around waiting for him to make a play. We’re a little more balanced this year. Our quarterback (Lamar Raynard) has developed into an outstanding player and was conference player of the year.  We’ve got exceptional players on the offensive line, with a senior center who is a great leader. We’ve got All-Americans at receiver (Elijah Bell) and running back (Marquell Cartwright). And we’ve still got a great defense.”

The Aggies were ranked No. 1 in HBCU football all season and went 11-0. They prevailed against their arch rival North Carolina Central to clinch the MEAC title. That was on Nov. 18. Since then, the challenge has been to keep everyone healthy and focused.

“It has been a while since we played, but we did get to practice in the snow the other day, and that broke the monotony,” Hester said. “For the coaches, it was fun for a little while. But after 30 minutes it was like, ‘It sure is cold out here.'”

Things will get more heated in Atlanta when the teams ranked 1-2 in HBCU football as well as 1-2 in turnover margin square off.

North Carolina A&T made the trip by bus on Wednesday morning. Hester drove up Interstate 85 to join the team in Greensboro. About an hour later, he and the Aggies rolled through Salisbury on their way to Georgia.

They practiced Thursday. They’ll have a walk-through Friday. On Saturday at noon, the Aggies will face the Grambling Tigers in the new, 71,000-seat Mercedes-Benz Stadium. This game will officially kick off the 2017 bowl season and will be televised by ABC.

“It’s a huge deal,” Hester said. “This is the dream game, the matchup the Celebration Bowl people wanted all along, the best two teams in HBCU football playing for a national championship. There are a lot of story lines. Coach Broadway coached Grambling before he came home to North Carolina A&T. And the father (Lee Fobbs) of Grambling’s head coach (Broderick Fobbs) used to be the head coach at North Carolina A&T.  I’d buy a ticket.”

This is a clash of storied programs, who haven’t seen each other on a football field since 1996. While N.C. A&T won the first Celebration Bowl, Grambling beat North Carolina Central in the second one. N.C. A&T, crippled by the loss of its top two quarterbacks, lost to N.C. Central last year and didn’t make it.

The first school you think of when it comes to HBCU football is Grambling.  In that era when opportunities were limited for black athletes, especially in the South, great players found their way to Grambling in Louisiana. There are 29 players from HBCU schools in the NFL Hall of Fame. Four of the 29 — Green Bay Packers DL Willie Davis, Oakland Raiders DB Willie Brown, Houston Oilers WR Charlie Joiner and Kansas City Chiefs DL Buck Buchanan — suited up for coach Eddie Robinson’s Grambling Tigers.

North Carolina A&T also produced an NFL Hall of Famer — defensive end Elvin Bethea, who created havoc for the Houston Oilers from 1968 to 1983.

Obviously, the game has changed for HBCU schools in the modern era. Grambling, despite its 14 national HBCU titles, can’t win a recruiting battle for an athlete that Alabama or LSU wants. North Carolina A&T isn’t going to get a player coveted by UNC or N.C. State.

But occasionally a Tarik Cohen slips under the radar of the big schools, and a great coach  (Broadway has four HBCU national championships) keeps North Carolina A&T competing at a high level. Broadway performed an incredible turnaround in Greensboro. The Aggies lost 27 in a row not so long ago.

Hester is asked frequently if he’d rather be competing in the FCS playoffs — or in the Celebration Bowl.  North Carolina A&T was ranked seventh in the most recent FCS poll.

“As a coaching staff we talk about how we’d do in the playoffs with this great group of guys that we have this year,” Hester said. “A lot of teams that were in the FCS playoffs would not want to play us. I’m sure we’d have our hands full with a James Madison or a North Dakota State, especially on the road, but I honestly believe we would also present some problems for them.”

North Carolina A&T competed in the FCS playoffs last season, albeit without its quarterbacks, so Hester can compare the playoff experience of 2016 with his Celebration Bowl experience from 2015.

“If you asked any of our upperclassmen who have done both, they’d choose the Celebration Bowl, no question, and I would personally choose the Celebration Bowl,” Hester said. “Our guys will be treated like kings in Atlanta, and they’ll get so many gifts. Our guys know that they’re representing their league and all the history of HBCU football. This is something they’ll never forget.”

Hester said after the 2015 Celebration Bowl triumph — an exciting, 41-34 win against Alcorn State in the Georgia Dome — that applications went up tremendously at N.C. A&T, a growing school with 11,000 students. The payday for the MEAC was $1 million. The national exposure was priceless.

Perennial SWAC champ Grambling (11-1) also boasts an 11-game winning streak. The Tigers dropped their opener to Tulane but haven’t been stopped since.

“Looking at them on film, Grambling looks like an 11-1 team is supposed to look,” Hester said. “They have great personnel. The good news is we’ve had a lot of time to prepare for them. We’ll have to fly around and be physical. But if we play the way we did all season, we’ll be OK.”

No MEAC team has ever finished a season undefeated.

The Aggies will be out to make history on Saturday. A coach from Salisbury and a tackle from Kannapolis will be in the middle of it.