Cards’ Piscotty dealt to A’s after mother diagnosed with ALS 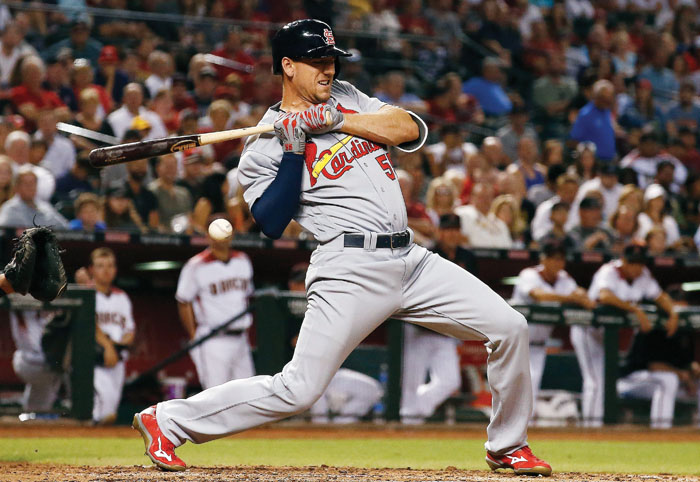 AP Photo/Ross D. Franklin, File ... St. Louis Cardinals’ Stephen Piscotty was traded to the Oakland Athletics for a pair of infield prospects, allowing the outfielder to be near his family’s home in Pleasanton, California, following his mother’s diagnosis with Lou Gehrig’s disease.

LAKE BUENA VISTA, Fla. (AP) — Stephen Piscotty has been traded by the St. Louis Cardinals to the Oakland Athletics for two infield prospects, allowing the outfielder to be near his family’s home in Pleasanton, California, following his mother’s diagnosis with Lou Gehrig’s disease.

Gretchen Piscotty was diagnosed in May with amyotrophic lateral sclerosis, a disease that attacks nerve cells. Her son left the Cardinals for five days after the diagnosis and returned May 31.

“You are never making a player trade simply for geographic or sentimental reasons,” John Mozeliak, president of baseball operations for the Cardinals, told St. Louis media. “It had to be something that made sense for us. There were certainly some opportunities to move him elsewhere. When you are looking at how to break a tie, clearly that did play into it.”

The 26-year-old Piscotty hit .235 with nine homers and 39 RBIs in 107 games last season, spending stretches on the disabled list because of a strained hamstring and groin. He was selected by St. Louis from Stanford with the 36th overall pick in the 2012 amateur draft, made his big league debut in July 2015.

Piscotty agreed in May to a $33.5 million, six-year contract.

LAKE BUENA VISTA, Fla. (AP) — Much like the postseason, the baseball winter meetings became a parade of relievers.

“That’s probably the one area in which there’s been a lot of activity, at least on the free-agent market,” Mets general manager Sandy Alderson said.

Cishek and Morrow are going to the Chicago Cubs, who could lose Davis.

“You got to have that great bullpen to play the last game of the year and win it,” Cubs manager Joe Maddon said.

GMs, executives and scouts who packed a hotel lobby near Disney World for three days headed home, eager to continue their holiday shopping.

Overall, 12 major league free agents have finalized contracts this offseason. At the same point last year, there had 42 deals.

The New York Yankees made the biggest splash at this annual swap shop, acquiring Stanton from Miami. The Marlins, meanwhile, looked adrift under new CEO Derek Jeter, trading away a trio of All-Stars — Marcell Ozuna, Dee Gordon and Stanton — to cut payroll.

The much-traveled Rodney has a deal with Minnesota, a person familiar with the negotiations told The Associated Press.

Known for shooting an imaginary arrow into the sky to celebrate saves, he turns 41 during spring training.

Philadelphia is boosting its bullpen with Pat Neshek and Tommy Hunter, the Nationals are set to keep Brandon Kintzler and the Mets added Anthony Swarzak.

The final piece of official business at the meetings was the Rule 5 draft for players left off 40-man rosters. No surprise, the most interesting name was a reliever.

Anthony Gose, last seen in the majors as a speedy center fielder for the Tigers, is trying to revive his career as a pitcher. The lefty has a fastball in the upper 90s and made 11 relief appearances last season in the low minors for Detroit.

The World Series champion Houston Astros picked Gose, figuring it was worth a $100,000 gamble.

“We know we’re putting our chips on red 23,” Houston pro scouting director Kevin Goldstein said in a roulette reference, “but there could be a good payoff.”