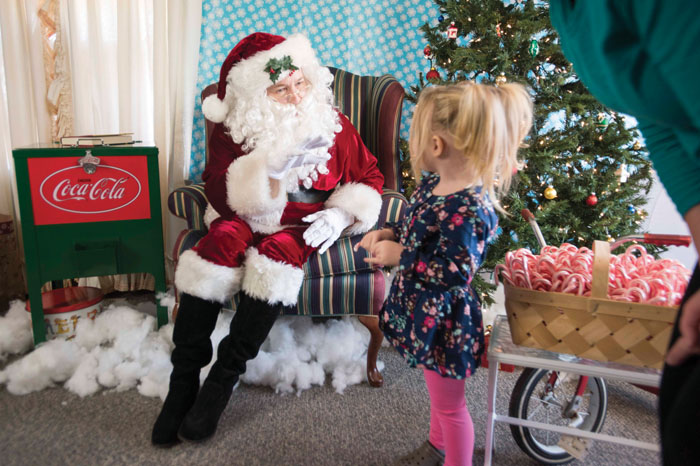 SPENCER — Hold onto your reindeer and set down that glass of eggnog — Santa Claus is a woman.

Since after Thanksgiving, in a tiny bake shop in Spencer, Mary Ann McCubbin has been realizing a lifelong dream of donning the red suit, hat, boots, belt, padding, white beard and glasses and being Santa Claus for all the kids who visit.

If she had a bucket list, this is one of the things McCubbin can finally check off. Heck, she even feels like a pioneer, a trailblazer.

“I mean, under all these clothes, why shouldn’t a woman do this?” McCubbin asks. “I don’t look all that like myself, I hope.”

No, she doesn’t, though at the risk of being politically incorrect, she has better looking legs than most Santas.

During weekdays, between 2 and 5 p.m., McCubbin has made Jacqui Watson’s bakery at 1108 S. Salisbury Ave. her own North Pole. McCubbin will be at the Sugar Fairy Sweet Shop for only two more afternoons — today and Friday — before another Santa Claus (a guy) takes over next week.

Santa also is at the shop from 9 a.m. to noon Saturdays.

It has been a good run for McCubbin in her first-ever role as Santa. She reports that no child has thrown up or peed on her yet. There have been no tantrums or frightened screams.

“Everybody has been as good as gold,” McCubbin says.

Watson never hesitated in asking McCubbin to be one of her four Santas. McCubbin is an accomplished singer and actress who has played a multitude of roles through the years in local theater.

McCubbin laughs, describing how she always tells her directors, “If you want the play to be good, cast me.”

In the mornings before heading for her Santa role in Spencer, McCubbin teaches a preschool class of 2-year-olds at First United Methodist Church. She also has been a Christmas performer for children’s librarian Robert Jones’ RoBoJo Theater.

McCubbin talks to her young visitors in a deep, husky voice. As she did with 2-year-old Brooklyn Smith Tuesday afternoon, she covers all the bases. What did she want for Christmas? Has she been naughty or nice? Does she have any brothers or sisters at home?

You know the drill.

Watson has set up a separate room at the bake shop for Santa Claus. There’s a high-backed chair, basket of candy canes, inflated snowman, backdrop of wrapping paper, wads of cotton for snow, an old Coca-Cola ice box, an antique tricycle and, off to the side, big umbrella lights that are good for the portraits Watson takes.

“I’m the elf photographer,” Watson says. She posts the kids’ (and adults’) portraits with Santa on her website, and parents can order them off there, if they want.

McCubbin grew up in Jacksonville, Florida, in the 1950s with two older brothers, when there were “so many things little girls didn’t get to do,” she says.

During the Christmas season in those days, Santas were ubiquitous. Even grocery stores had them. The dream of being Santa took root back then for McCubbin.

McCubbin remembers the Santa at her local Winn-Dixie grocery store giving every kid a frozen penny, which he said came from the North Pole.

So McCubbin has been giving all the children coming to see her a frozen penny, too. (Watson chills them in her freezer.)

McCubbin has enjoyed the Santa role and wants to do it again next year. She might even make her own suit. The one she has been using is furnished by Watson.

“This is the only hard part about being Santa — the beard,” McCubbin says. “But I can take it down between children.”

Last Friday, Watson’s shop had a small oven fire, quickly extinguished, but there was plenty of smoke. McCubbin found herself outside in her Santa suit, flagging down the fire department.

Her eyes how they twinkled. Her dimples how merry.

You just wonder how many of the firefighters did a double take.