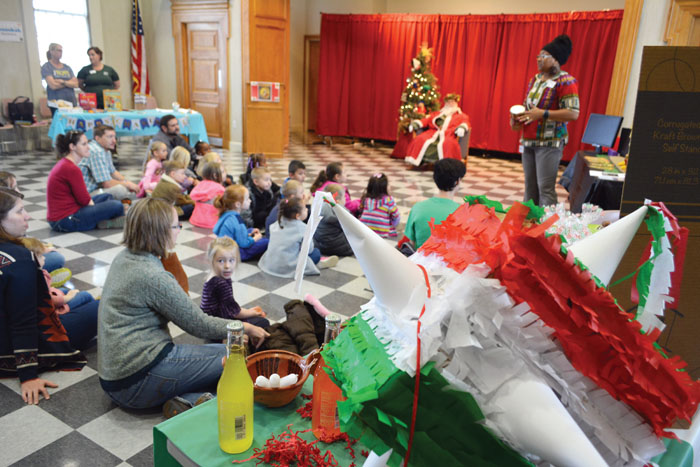 A visit from St. Nicholas. The miracle of light. Unity, struggle and the future. The gifts of three kings.

“We wanted to keep it simple,” said Mary Burridge, family support manager for Smart Start Rowan. “We wanted to show the children that everyone celebrates differently, and that’s OK.”

Amie Gray and Teri Taras of the Levine Jewish Community Center traveled from Charlotte to talk with the children about Hanukkah. Gray told the story of how in the holy temple of Jerusalem, there was only enough oil to keep the menorah burning for one day — yet the candles miraculously burned for eight days.

“It’s the miracle God gave us,” Gray said. “So we celebrate the oil and fry everything in oil.”

“Jewish families give presents for eight nights, although there’s socks and underwear,” Gray said. “It’s not that spectacular.”

James Bigsby, dressed as St. Nicholas, gave the children a brief history of the man now known as Santa Claus.

“I have the book!” one little boy piped up.

“I have the book, too,” Bigsby replied.

Although St. Nicholas was born in third-century Turkey, Bigsby wore the familiar red robe associated with German tradition. His Old World attire also included a forest green jacket and pants and a wreath on his head.

Because a poor man’s daughters needed a dowry, according to one story, St. Nicholas secretly tossed gold through an open window, thus becoming a gift-giver.

The children told Bigsby that he gives a lot of presents.

“I do give a lot of presents,” he said. “There are a lot of children in the world.”

Dressed in colorful African attire, Quyona Rawley, a member of the Smart Start Rowan staff, explained to the children about Kwanzaa.

“It’s a cultural tradition,” she said. “You can add it in with Christmas.”

Primarily an African-American tradition, Kwanzaa is celebrated Dec. 26 through Jan. 1.

As in Hanukkah, candles are lit each evening — three red candles for struggle, three green candles for the future, and one black candle for unity.

“How are your candles lit?” Bigsby asked.

“We light the black candle, and then we alternate lighting the red and green candles,” Rawley said.

Dressed as the Virgin Mary, Tania Cuevas, also of the Smart Start Rowan staff, talked about the festival of Las Posadas, which originated in Mexico.

The festival, held Dec. 16-24, centers on the visit of the three kings. Throughout the event, families travel to different homes — commemorating the journey of Mary and Joseph — and enjoy treats such as hot chocolate and sweet bread. They also break pinatas.

Afterward, the children and their families got a chance to visit with each presenter, enjoying doughnuts, hot chocolate, and other treats. Kaylana Hall-Rogers, 4, bites into a doughnut given to her by Amie Gray from the Levine Jewish Community Center in Charlotte. Gray talked with the children about Hanukkah at Smart Start Rowan’s Winter Traditions program on holiday traditions. Susan Shinn Turner photo

“Right now, we’re talking about Christmas around the world, so this is awesome,” he said.

Safrit said he has children in his class of 18 from Hungary, Germany and Mexico.

“I enjoy it because of the diversity,” he said. “This event is a good way to incorporate different cultures. I tell our children that nobody looks the same. Everybody’s different, but our needs are all the same.”

“We always teach her that everybody’s different, and that’s OK,” Hall said. “This event is good for her to dig into it.”

While her mother was talking, Kaylana was busy digging into one of Gray’s doughnuts.

Hall, who has Italian and Indian heritage, and Avery, who has African-American heritage, have many traditions in their own family. They noted that they have their Christmas shopping done, except for gifts for each other.

Gray and her husband, Jack, who is Catholic, have two daughters, Libby, 17, and Alison, 11. The family celebrates Hanukkah and Christmas, she said.