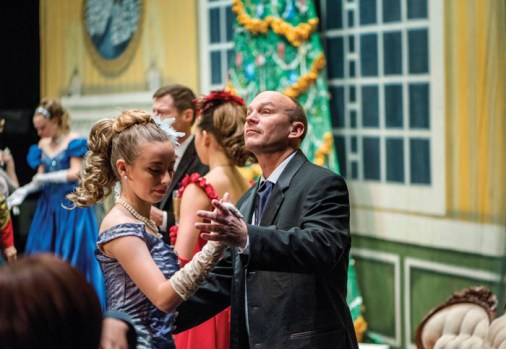 JON C. LAKEY / SALISBURY POST Parent Volunteer Tim Hartsell (right) takes the role of a party guest during the opening scene of the Nutcracker. Ashley Cowles (left) is one of the over 100 dancers in the ballet. Parent volunteers work behind the scenes to make sure that the Piedmont School of Music and Dance's performances of the holiday classic "The Nutcracker" goes off like clockwork. Even during regular business hours, parents assisted with the educational performance at the Kannapolis Performing Arts Center on Thursday. Thursday, December 7, 2017, in Kannapolis, N.C. 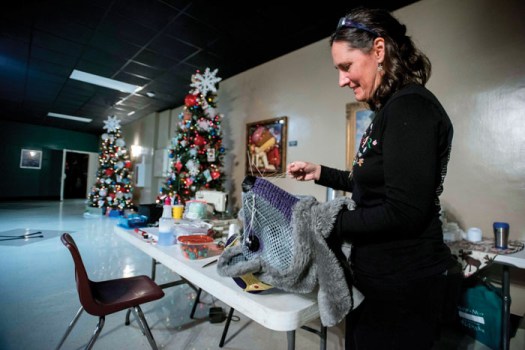 JON C. LAKEY / SALISBURY POST Kathryn Prince makes a simple repair to the Mouse King head piece while the show was going on in the next room. Parent volunteers work behind the scenes to make sure that the Piedmont School of Music and Dance's performances of the holiday classic "The Nutcracker" goes off like clockwork. Even during regular business hours, parents assisted with the educational performance at the Kannapolis Performing Arts Center on Thursday. Thursday, December 7, 2017, in Kannapolis, N.C. 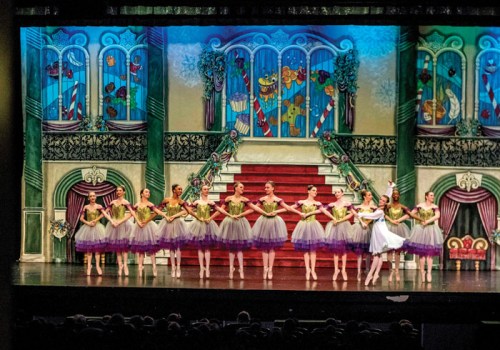 JON C. LAKEY / SALISBURY POST Parent volunteers work behind the scenes to make sure that the Piedmont School of Music and Dance's performances of the holiday classic "The Nutcracker" goes off like clockwork. Even during regular business hours, parents assisted with the educational performance at the Kannapolis Performing Arts Center on Thursday. Thursday, December 7, 2017, in Kannapolis, N.C. 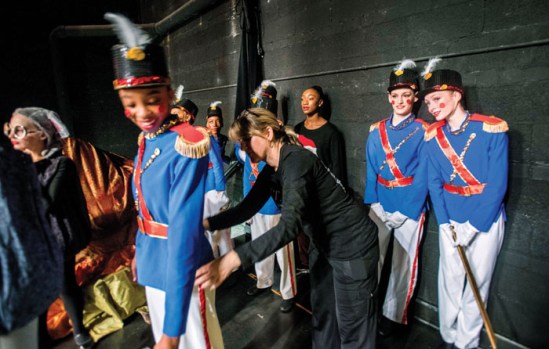 Costume mistress and parent volunteer Laura Holt helps one of the dancers, Maya Goldsberry, with her soldier costume before she goes on stage in "The Nutcracker." Jon C. Lakey/Salisbury Post

SALISBURY — Over the 15 years that “The Nutcracker” has been presented by Piedmont Dance Theatre and Salisbury Symphony, hundreds of young dancers have performed. There’s also an army of parents who keep it going.

With eight hand-painted sets measuring 20 by 40 feet, 900 wardrobe pieces and a 9-foot-tall working clock, there’s plenty for the parents to do.

Kathryn Prince is the first to credit everyone else with the success of the production.

“You see my work with your eyes,” Prince says, “but other parents offer many services that are unseen and just as important.”

Prince designed the backdrops and painted them with a 2-inch paintbrush. The job takes attention to detail, color and scale.

Each set is laid out on the floor for her to paint. Prince starts with a design drawn on graph paper, then overlays color schemes with tracing paper.

She submits several designs to Rebecca and Daniel Wiley, the directors at Piedmont Dance. Once they select a set, Prince gets to work marking off squares on a massive canvas, corresponding to the squares on the graph paper. Other parents help.

Then she draws the design, square by square. Prince walks on the canvas in sock feet so as not to smudge the chalk.

“How large is a set of stairs? How many stairs does it take to get to a second floor?” The scale must be true to life.

She completes spots of one color all over the canvas before using another color. That way, the images don’t really appear until she is nearly done with the work.

“Not until I add all the shadows does the thing begin to pop,” Prince says with a chuckle.

Prince uses house paint from local recycling shops. “Interior, exterior, it doesn’t matter, I use it all. I mix them to get shades. Sometimes it works, sometimes it doesn’t.”

Last year, Rebecca Wiley asked Prince to sign her newest set, the palace for Act II. Prince, characteristically eschewing credit, found the Chinese character for her last name and added it to a tag hanging from a teacup painted on the backdrop. A visitor from China confirmed she had done it correctly.

Her first few sets were heavy, as she had to paint thick coats for good color saturation.

“You learn as you go along,” she says.

Now she “sizes” the canvas with cornstarch and water so that a thin coat of paint is not absorbed too much. Her newer canvases are much lighter.

With eight sets to her credit, Prince estimates each took about 180 hours of work, which translates to about four and a half weeks of full-time work.

Her biggest challenge? “Just finding the hours to get it done.”

With many costumes and even the growing Christmas tree to her credit, Prince singles out the Mother Ginger costume as one of the bigger challenges.

She built a scale model first and asked her husband to help engineer the pipes to give the skirt its massive form.

Mother Ginger stands about 8 feet tall. A dancer on a rolling trolley is hidden beneath her 6-foot-high skirt. Also hidden beneath it are eight dancers and two other students who push the trolley so Mother appears to glide.

Prince credits her parents with her work ethic. Her dad, 83, can’t visit for Christmas because his church in Detroit welcomes the homeless for the holidays and he “must” help. Her mom is tireless, as well, and is traveling to see the production this weekend — sewing machine in hand, just in case help is needed.

Volunteer Laura Holt manages the wardrobe of about 900 pieces. “Nutcracker” has 110 dancers this year, with a total of 150 costumes because some dancers play multiple parts. Some costumes have 10 pieces, some have three. Holt organizes it all.

One dressing room has 32 dancers with four moms to help. Each dancer requires tights, leotards, a mouse body, makeup, whiskers, gloves, and shoes.

It’s also an engineering feat. One mom who is a “spreadsheet genius” lists each of the 900 wardrobe pieces. Starting in September when roles have been cast, Holt and other moms measure each of the 110 dancers and alter the Piedmont Dance costumes to fit them.

Each wardrobe piece has a number that is logged with the dancer’s name. Smaller pieces were a challenge until Holt had the idea last year to use clear-pocket hanging shoe bags. Each pocket is labeled with a dancer’s name and holds the smaller pieces that can’t go in the garment bag.

Holt says she enjoys the work for two reasons. First, she’s supporting the dancers and the company. Second, because they spend long hours together, many of the parents have become close friends.

“I ran into a dad recently whose daughter graduated four years ago,” she says. “He told me to enjoy my time in ‘Nutcracker.’ He still misses being involved four years later.”

Another wonder of the production is the 9-foot working grandfather clock built by Kevin Clark, a proud ballet dad. There’s a point in the music when the symphony plays a clock striking midnight. Backstage dads set the clock so its midnight will coincide with the music.

Clark asked the directors if they wanted the cabinet of the clock to be big enough for someone to be inside. They declined, but he persisted. Now, Herr Drosselmeyer makes a dramatic entrance through the clock.

Clark decided on his own last year that he wanted to make a real clock for the performances. After “Nutcracker” ended, he drew designs and sent them to the Wileys, who were vacationing in the Caribbean, for approval.

Clark engraved the clock face with “Nutcracker Clock Company, Kannapolis, NC.” The clock’s footprint is 24 by 30 inches. Clark built it in two pieces for easier transport between the Kannapolis and Salisbury performances.

The front of the clock cabinet features gears of all sizes that really turn. “The motor that turns them is a little noisy, though,” Clark says, so he’s looking for a quieter motor.

Doing and redoing seem to be a hallmark of his work for the dance company. His first project was to build a wooden doll box. Rebecca Wiley asked him to make it 3 feet square. He did so and on delivering it to the studio, found it couldn’t make it through the interior doors. He rebuilt it at 36 by 30 inches.

Other items he’s built include toy soldiers and a sword.

One year, a dance instructor played the Rat King. He was “pretty rough” on the swords. In the Saturday night performance, he broke a sword. Clark got home from the performance at 10:30 that night, cut a new sword from wood, sanded it, painted it, and had it ready for the Sunday performance.

Clark also engineered the fog machines. Each side has a 50-gallon drum for dry ice, with tubes across the front of the stage. A snow machine he built in 2011 was a little tough to instal, and didn’t produce a lot of snow, so he re-engineered it this year. He estimates he has about 150 hours of work in it.

Watching the “Nutcracker,” it’s easy to get caught up in the music, the graceful dance and the fantasy. But the sets, costumes, props and clocks created by the parent volunteers is all sort of a magic of its own.