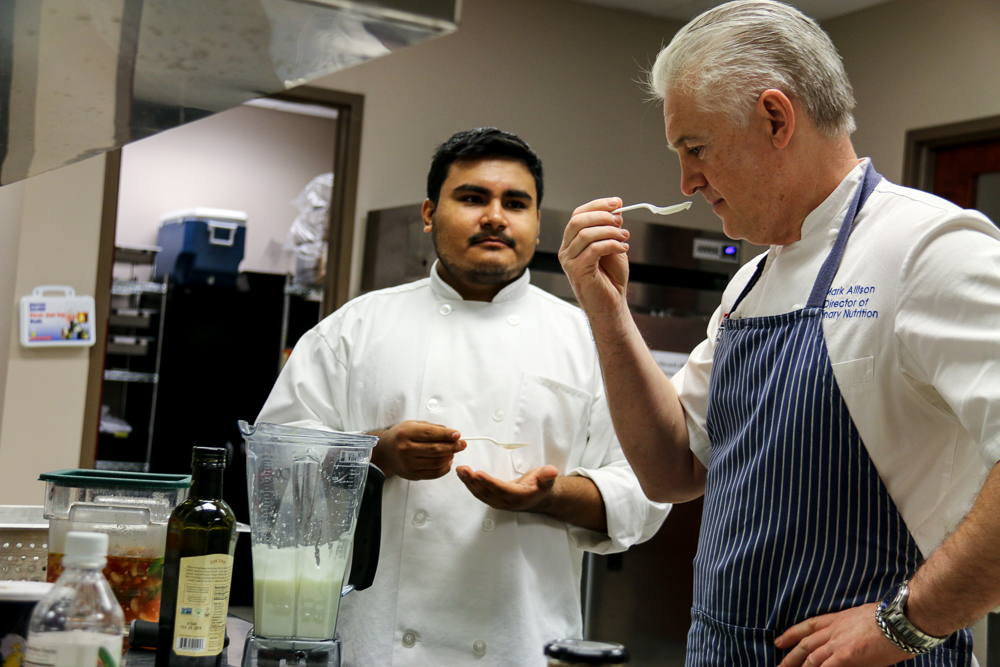 KANNAPOLIS — For an eager culinary arts student, the challenge was intriguing: Find a palatable culinary use for watermelon concentrate.

Samuel “Sammy” Jijon, a senior at A.L. Brown High School in Kannapolis, joined the lab of physiologist Penelope Perkins-Veazie as an intern this fall. He not only embraced the task of product development, he also learned about important nutrition and food science considerations commonly evaluated in Perkins-Veazie’s post-harvest physiology lab at N.C. State University’s Plants for Human Health Institute at the N.C. Research Campus.

By November, he had a pretty solid prototype of a watermelon-mango fruit leather. In fact, he had two flavors: original and cayenne. While it’s not ready to hit the market just yet, Jijon and Perkins-Veazie are pleased with the progress and considering what the next steps might be.

Perkins-Veazie has been working with watermelon as a post-harvest physiologist for more than 15 years.

While watermelon is a sweet summertime treat, there are few processed foods that can put the health benefits of watermelon on the grocery shelf in the off season. Though many fruits can easily be juiced, canned or frozen, watermelon doesn’t hold up well to these options usually because of taste or texture deterioration.

Watermelon is a member of the squash family. When heated, the squash flavor comes to the forefront and the sweetness is lost.

Like most fruits and vegetables, watermelon has significant health benefits. Research at the Plants for Human Health Institute often focuses on plant compounds called phytonutrients. These compounds, though not essential for survival like vitamins and minerals, are healthful and help prevent disease.

In watermelon, the phytonutrients of interest to Perkins-Veazie and Jijon were lycopene, citrullene and beta-carotene. The Perkins-Veazie lab often evaluates fruits and vegetables for a change in phytonutrient content after a crop is harvested, after a period of storage or after a processing treatment.

Perkins-Veazie’s interest in a culinary product for watermelon concentrate is twofold. First, it would put more food products on the shelf offering the health benefits of lycopene, citrullene and beta-carotene. Second, more uses for watermelons could provide an economic boost to watermelon farmers. Currently, watermelon production accounts for $21.4 million of North Carolina’s agricultural revenue — almost exclusively through fresh product sales.

Perkins-Veazie has found a successful technique to turn a ripe watermelon into about 60 milliliters (one-fourth cup) of highly concentrated watermelon juice. While the aroma is maintained, the flavor is not.

“However,” Perkins-Veazie said, “while the phytonutrient content and health benefits are still present, it is only valuable if someone can develop a desirable food product or food ingredient.”

It seemed like a good fit when Kannapolis City Schools’ career and technical education coordinator, Chef Mallory Harris, approached Perkins-Veazie in search of an internship opportunity for a culinary arts student at the high school only a half-mile from the Research Campus.

Knowing that Jijon immigrated to the United States from Mexico when he was only 1 year old, Perkins-Veazie encouraged him to explore the diversity of tropical fruits from his culinary heritage that may not be common in the United States. He set about trying different fruit combinations to mask the watermelon-squash flavor without losing the phytonutrients.

From his culinary training, he also recognized a need for lemon juice to add acidity and as a food safety consideration.

Ultimately, the winning combination was watermelon, mango and guava. Guava, a major fruit crop in Mexico, not only masks the watermelon flavor but adds a pleasing texture.

Perkins-Veazie advised Jijon to steer away from added sugar or salt to keep the product as natural and healthy as possible. But once he had the basic recipe to his satisfaction, he thought it would be fun to spice it up a bit.

“I started with a gram of cayenne powder, and I thought it had a good kick to it, but Dr. P couldn’t handle it. She has a low heat tolerance, it seems,” he said.

Jijon dialed it back a bit and they found an amount that was acceptable to both their palates.

From lab to kitchen

In addition to creating recipes, Jijon has had the opportunity to assist with routine lab work.

“Working in the lab was a great experience, but the repetition of data collection wasn’t all that exciting,” he said.

In an effort to help Jijon learn as much as he could in the final weeks of his internship, rather than assign more lab work, Perkins-Veazie reached out to Chef Mark Allison at the Dole Nutrition Institute, also located at the N.C. Research Campus, to see if he would be willing to mentor Jijon a couple of hours a week. As he keeps a watchful eye on Jijon’s prep work, Allison says,

“It’s been great having an additional set of capable hands to assist with recipe preparations. Sammy has a bright future ahead of him,” Allison says.

Jijon hopes that his future includes attending Johnson & Wales University, where Allison was formerly dean of the College of Culinary Arts.

Jijon has shifted his degree interest from culinary arts and food service management to culinary nutrition. A career in that field may involve managing the nutritional composition of meals for people with dietary restrictions.

His experience. Perkins-Veazie and Chef Allison have helped Jijon follow his dream.