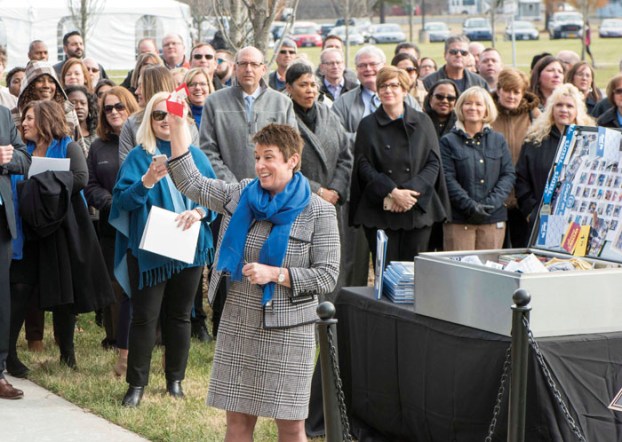 Food Lion President Meg Ham holds up a piece of the ribbon that was from the original ribbon cutting that was brought by Ronnie Smith for the time capsule. Salisbury grocery store Food Lion celebrated 60 years of business on Tuesday at the corporate office. Jon C. Lakey/Salisbury Post

Laurels to Food Lion’s 60th anniversary celebration, which culminated this week with the sealing of a time capsule to be opened in 15 years. Founded in Salisbury, Food Lion has had a tremendous impact over its six decades — helping shoppers save money, providing pay and benefits for employees and generating  wealth for stockholders. The impact has been most direct in Rowan County, but it spreads far and wide. Founders Ralph Ketner, Wilson Smith and Brown Ketner started with one store in Ketner Center and tons of energy, grit and ingenuity. They accomplished more than anyone could have imagined. This community especially will be forever grateful. Who knows what changes might take place over the next 15 years?

Laurels to the people who made Monday’s shoe giveaway at Overton Elementary School possible. It started as the idea of Fran Lescoe, the school’s Communities in Schools coordinator, and was funded by a generous donor who wishes to remain anonymous. School staff also had a big hand in the project, as did the folks at Ralph Baker’s Shoes. Four hundred children received new running shoes, an amazing gift. This year has seen several programs pop up across the county to provide new shoes for children. Sadly, some parents cannot afford to keep up with their children’s growing feet. Now the Overton students  can complete their Healthy Rowan Daily Mile in comfort.

Dart to parents who raise their children in conditions most families would abhor. Page 3A of Wednesday’s Post had a coincidental juxtaposition: one story about a couple charged with misdemeanor child abuse and another story about the groundbreaking for the Terrie Hess Child Advocacy Center expansion. The importance of having advocates for children cannot be overstated. American children are suffering from a hidden epidemic of child abuse and neglect, according to the American Society for the Positive Care of Children. This could have longterm consequences for society as the stress of mistreatment disrupts brain development and does lasting damage.

When Ralph and Anne Ketner bought what was then the Wallace Building in 1989, the possibility that people might want... read more