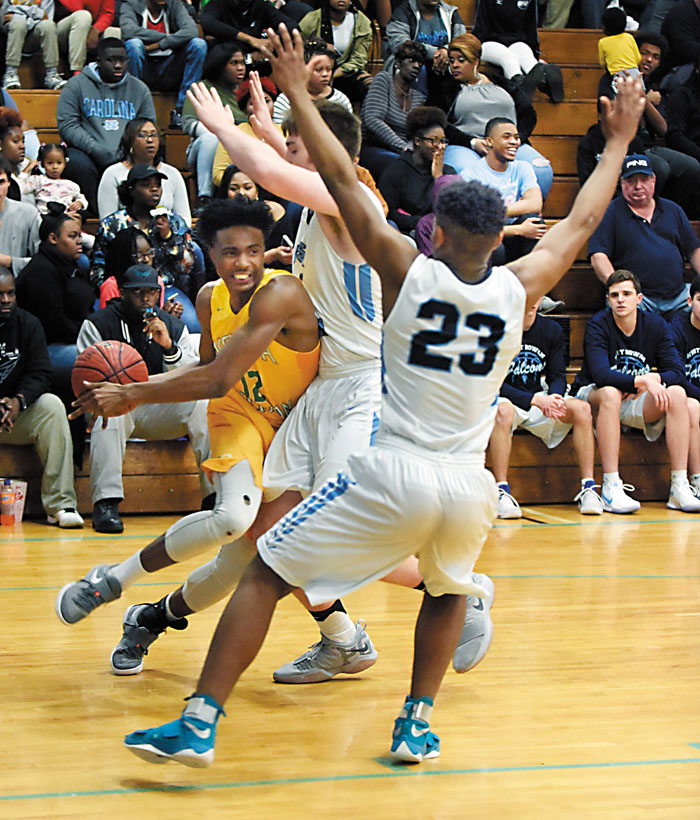 MOUNT ULLA —Whether or not it was a statement game is debatable.

What isn’t debatable is that West Rowan’s 55-44 win against visiting North Rowan on Wednesday night — a dogfight played before a near-capicity crowd — had the Falcons believing they deserve an exclamation point affixed to their name.

“The only statement I saw was that the Rowan County (Christmas) Tournament is going to be incredibly competitive this year,” longtime coach Mike Gurley said. “There isn’t a bad team in the lot, and if you throw North Stanly and Davie in there it gets even tougher. I don’t know if we made any statement tonight. We won a basketball game against a really good team that’s going to keep getting better and better.”

With just 14 shopping days until the Christmas extravaganza at Goodman Gym, West (3-3) played its best game of the season and beat a previously unbeaten North team that won its first four encounters with Yadkin Valley Conference squads. The guard play of seniors Martavio Rankin and Josiah Dixon spoke volumes — as did Caleb Mauldin’s game-high 23 points and penchant for snagging offensive rebounds.  North made six 3-pointers — three each by freshman Nick Colson and junior Derrick Page — but missed its first 11 free throw attempts and finished 6-for-25 from the line.

“We missed 19 free throws,” Page said after leading the Cavs with 14 points. “The thing is, we shoot them every day in practice and make them. Free throws are just a mental thing.”

They were an elusive thing in the first half, when North missed 10 straight. The Cavs had a 21-18 lead after Dayjuwon Cooke soared through the lane for an easy layup with 2:17 on the clock. West responded with Mauldin’s free throw and put-back and Rankin’s full-court drive and layup with a second to go.

“We knew we just had to work hard,” Mauldin said. “Maybe we weren’t making the best decisions, but if we kept working we knew good things would come our way.”

It was a pockmarked performance for North, which played well defensively but ran a one-and-done offense that often resembled a disorganized yard sale. “A lot of things to be disappointed about,” said Page. “We wanted to rebound, get a body on Caleb, but didn’t do that enough. That’s just playing with heart — you boom someone and knock them off their feet.”

Then there was the free-throw problem. “That’s the story of the game,” said North assistant coach Bill Kesler. “If we had made a decent amount of foul shots, we’re in the game. But obviously, you can’t shoot like that and stay with a good team.”

Despite all that, North was still in the game as the second half unspooled. Rankin’s 3-ball from the left corner gave West a 28-24 edge early in the third period. “When I’m open, I have to shoot,” he said. “I’m either going to miss it or make it, but that’s a shot I have to take.”

This time the Cavs answered and regained the lead, 32-30, when Page drilled a three from the left corner. The game’s momentum finally tipped West’s way as the third quarter ticked to a close when Tykese Warren found himself in the right place at the right time for an unchallenged, second-chance layup following a teammate’s runaway misfire. Mauldin then muscled his way inside for a stick-back that made it 39-35 Falcons after three.

“I’ve been dealing with them Cavaliers for going on 28 years,” Gurley said afterward. “What I’ve learned is that if you don’t go rebound, you’re probably not going to beat them. Bob Hundley, Kelly Everhart, Andrew Mitchell and Martin Unger — those guys are all about getting on the glass.”

As the final period opened, Mauldin did it again — this time securing back-to-back offensive rebounds before kissing a layup off the glass for a 41-35 lead. Moments later Payne Stolsworth — who took an oh-fer in Tuesday’s win at A.L. Brown — knocked down a rainbow 3-pointer from the right corner that put the Falcons up by nine points. North’s final basket came with 3:09 remaining, when Page scored on a dribble drive off the left baseline.

“It’s a big rivalry, us and North,” Rankin said. “A lot of people are disregarding us, but we just keep fighting, right to the end. This game was a statement. Don’t count us out.”

NOTES: North’s Brevin Goodlett made three of his four free throws, all in the fourth quarter. … The Cavs played without senior guard Josh Ellis, who previously suffered a right foot injury and had it in a boot. … Mauldin is averaging 26.7 points-per-game through six outings. … Both teams return to action on Friday. North hosts West Montgomery in a YVC match and the Falcons visit Cox Mill in another non-leaguer.