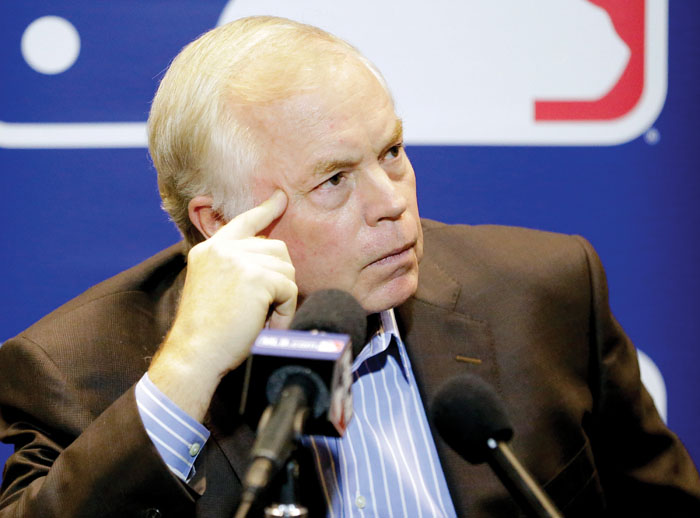 To a new position — or a new team.

And no surprise, the busy New York Yankees are looming, looking to boost a ballclub getting more formidable by the day.

For the moment, no deals for that trio of All-Stars.

“Everything else is — today — moot,” Mets general manager Sandy Alderson said of a Harvey deal.

Pitching is always at a premium, and the Chicago Cubs completed two-year contracts for reliever Brandon Morrow and pitcher Drew Smyly, expected to miss next season while recovering from Tommy John surgery.

The Yankees made another trade, too. Nothing close to magnitude of getting NL MVP Giancarlo Stanton from Miami, but nonetheless a deal that could help them very soon. New York sent third baseman Chase Headley, pitcher Bryan Mitchell and $500,000 to San Diego for outfielder Jabari Blash.

“The biggest motivation from our end is it creates a lot more financial flexibility,” Yankees general manager Brian Cashman said after dumping a $13 million salary.

That could lead to another starter for the Yankees’ rotation, such as Fulmer. The 2016 AL Rookie of the Year was an All-Star last season, going 10-12 with a 3.83 ERA for the Tigers.

A more intriguing possibility, for any club, is Machado.

At 25, he’s already a three-time All-Star and two-time Gold Glover at third base. Plus, he’s a power bat, hitting 33 home runs with 95 RBIs last season.

Machado had an $11.5 million salary last season, is eligible for arbitration and can become a free agent after next year’s World Series. That’s prompted questions about whether the last-place Orioles can afford him, or if he’d even want to stick around Camden Yards.

Or if they’d be better off trading him to guarantee something in return.

In the meantime, Machado is indicating he’d like to shift over to shortstop. The spot is open, now that J.J. Hardy has become a free agent.

Machado made his big league debut as a third baseman in 2012 with the Orioles and has made 49 starts at shortstop, most of them in 2016 when Hardy was hurt.

“Always has, since the day he signed,” he said. “To say that Manny and I haven’t had conversations about it over the years, I wouldn’t be truthful.”

“Obviously, we’re not there yet, but it’s something that Manny — I found that players need to know about that, not February 15th or March 15th. They need to know about it back then — Manny’s capable of playing both real well,” Showalter said.

Then again, Machado could be playing either spot for some other team. The Yankees would love to slot him in, but no telling whether the Orioles would trade him to an AL East rival.

Baltimore owner Peter Angelos didn’t get along great with former Yankees owner George Steinbrenner, their animosity ratcheted up after the teams got into a vicious brawl in 1998.

“I’ve got a real gut feeling about how it’s going to work out, but I want to make sure we cover all the bases before whatever direction we go in,” Showalter said.

Harvey has come up in Mets’ trade talks. Coming off another injury decimated year, this time caused by a stress injury to the scapula bone in his right shoulder, he can become a free agent after next season.

New manager Mickey Callaway and pitching coach Dave Eiland take over a team that is built on starting pitching, provided a rotation that includes Noah Syndergaard, Jacob deGrom, Steven Matz and Harvey can stay healthy. The 28-year-old Harvey was 5-7 with a 6.70 ERA in another injury-filled season for the former ace.

Gehrig played with the Yankees from 1923 to 1939, when he retired while suffering from ALS. He batted .340 with 493 home runs and 1995 RBIs, and helped the Yankees win seven World Series titles.

The 1931 contract was part of a Yankees Legends offering by Heritage Auctions that was availabe for bidding through Sunday.

“In addition to Gehrig’s offensive statistics, which sent him to the Baseball Hall of Fame on the first available ballot, it was Gehrig’s bravery, reliability and quiet strength, which make him a favorite among the Yankee faithful,” Chris Ivy, Heritage’s director of sports auctions, said Tuesday. “And prices realized for memorabilia related to his Yankee career certainly reflect it.”

A scouting report on Derek Jeter from April 1992 sold for $102,000. The report was prepared by Yankees scout Dick Groch after he saw Jeter play in a high school game in Kalamazoo, Michigan. In his summation, Groch said about Jeter: “A Yankee! A five tool player. Will be a ML Star! +5!!”

The Yankees, who have won a record 27 world championships, selected Jeter with the sixth overall pick in the 1992 amateur draft. He went on to win Rookie of the Year honors in 1996 and helped the team win the World Series five times in his 20-year career before retiring in 2014.

The bat Gehrig used to hit his last two home runs, in an exhibition game in 1939, was also available, but the bidding did not exceed the reserve price and it was retained by the owner.