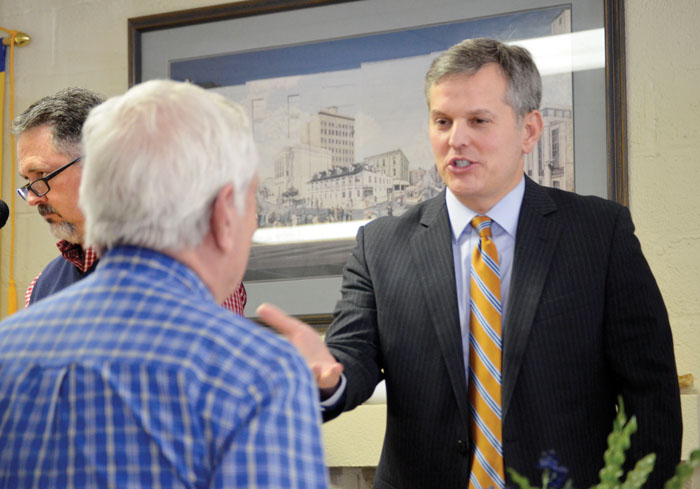 SALISBURY — Nearly four North Carolinians die every day because of opioid-related overdoses, which have replaced traffic accidents as the No. 1 cause of accidental deaths in the state. It’s one reason the N.C. Attorney General’s Office is determined to confront the opioid crisis.

Attorney General Josh Stein has traveled throughout the state listening to stories of triumph and tragedy from opioid abuse. Stein visited the Rotary Club of Salisbury on Tuesday to share those stories and ideas from various law enforcement agencies about how to combat the epidemic.

Rowan County has seen its share of opioid-related overdoses, a number that continues to climb.

Stein shared the stories of two people — one a young man who became addicted to painkillers and died of a heroin overdose a year later and another man in his 20s who at the age of 15 became addicted to opioids. That man has worked to overcome his addiction and is now studying to become a counselor to help others.

“The problem, sadly, is it will get worse before it gets better,” Stein said. “There’s no light switch that we can flip to make it go away.”

Stein said the solution is cooperation among law enforcement, medical prescribers, the public health community and the treatment and recovery community. Prevention, treatment, recovery and enforcement are critical to addressing the issue, he said.

He said prevention includes focusing efforts on young people who may abuse opioids as well as doctors or dentists who may overprescribe painkillers.

Stein said the Strengthen Opioid Misuse Prevention or STOP Act, which was unanimously approved by the state House and Senate, is a law that limits the number of days a patient can receive prescriptions and also requires doctors to use a statewide database to track prescriptions.

In addition to tighter laws and prevention, Stein said, people can help by ridding their medicine cabinets of unused prescription pills.

“They are a magnet to young people or people who have addictions,” he said.

He urged everyone to get rid of unused medications by turning them in at drop-off locations throughout the area.

Stein said treatment has to be a priority in North Carolina.

“We have to move more people into recovery,” he said.

Law enforcement officials have said they are not going to arrest their way out of the opioid crisis. “We have to target the addict,” Stein said.

He said Rowan County should follow the way of other innovative counties that have implemented diversion programs or get the community. For example, McDowell County has community paramedics that follow up with someone who has had an overdose reversal. The community paramedic meets with the person and eventually gets him into treatment.

Stein also spoke about protecting consumers by educating them about scams and telemarketers. He advised those gathered to not give out personal information including a Social Security number, bank account number or credit card numbers over the phone. He warned against high-pressure sales tactics in which someone on the phone makes buying an item seem like a must at that moment.

Anyone offering foreclosure help would not require large sums of money to help the person, he said.

The Rotary Club meets every Tuesday at the Rotary Hut, 300 W. Liberty St.

Visit the state Department of Justice website at www.ncdoj.gov for more information about scams, the opioid crisis and consumer protection tips.