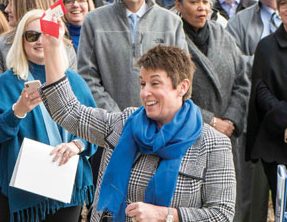 SALISBURY — As Food Lion President Meg Ham prepared to help bury a 60th anniversary time capsule Tuesday, she said it will be opened again in 15 years.

She then turned to the nearly 500 associates gathered on the lawn of the grocer’s headquarters at 2110 Executive Drive and said, “Who will be here pulling this out?”

Many in the audience laughed. Some raised their hands.

Loyalty was a big theme of the day, with Ham talking in her opening statements about what the company’s legacy means to her and her team.

She said it is important to her that so many of the nearly 1,800 associates who work at Food Lion’s headquarters had come to watch the capsule be buried.

“To celebrate and to have fun together and to remember where we came from and to take a moment to think about where we’re going,” Ham said.

She said she was happy to share the day with employees from Food Lion’s more than 1,000 stores across the Southeast and Mid-Atlantic in the form of the mementos that they had submitted to be put in the time capsule.

Some of those items, Ham said later, included scrapbooks, photos and ribbons saved from the stores’ grand openings.

Christy Phillips-Brown, a company spokeswoman, said there were also a few very creative entries, including a stuffed lion wearing camouflage sent from a Jacksonville store; a Mason jar full of sand sent from a beach-town store; and a cross-stitched lion with a store’s number stitched inside its body.

“Half of our stores are in North Carolina. Our heritage is rich here. We’re an integral part of the community,” Phillips-Brown said. “We give back every single day to our local food banks and feeding agencies. And that’s really what it’s about (for) us. It’s bringing that hometown, local feel every day in the towns and cities we serve.” JON C. LAKEY / SALISBURY POST Salisbury grocery store Food Lion celebrated 60 years of business on Tuesday at the corporate office by burying a time capsule and having a meal on the grounds for employees and guests. The time capsule was buried on the front lawn of the offices and filled with items from many grocery stores located across the region. The time capsule is scheduled to be opened in 15 years on the company’s 75th anniversary. Tuesday, December 12, 2017, in Salisbury, N.C.

Nelson Livengood, 71, is the longest serving of those employees. He’s been with the company for 50 years. Ham asked him to be one of the first people to put a shovel-full of dirt onto the newly buried time capsule.

Livengood said Ralph Ketner, one of Food Lion’s co-founders, hired him when Livengood was 20 years old.

“And I worked in the warehouse, started driving a truck. We only had three 10-wheelers, like school buses. I drove a school bus all through school. (I was) raised on a farm. So, you know, it wasn’t nothing to drive a truck,” Livengood said.

Fifty years later, Livengood has had a career that’s taken him to different states and allowed him to hire the first woman and African-American Food Lion truck drivers.

He said that at one point, he planned to quit Food Lion and join another company.

“But I enjoyed my job. They were good to me. And we were growing,” Livengood said. “I stayed with the company, and I’m glad I did.”

In addition to the large celebration hosted at Food Lion headquarters, small celebrations were hosted at each of theh company’s 1,000-plus grocery stores.

Employees received a “celebration kit” that included a tablecloth with a company timeline on it. They were encouraged to sign the tablecloth and then hang it on the break-room walls.

Greg Finchum, head of retail for Food Lion, said the celebrations at individual stores helped create a fun atmosphere for employees and customers.