Clarence Page: The ‘chaos president’ keeps us guessing — and praying 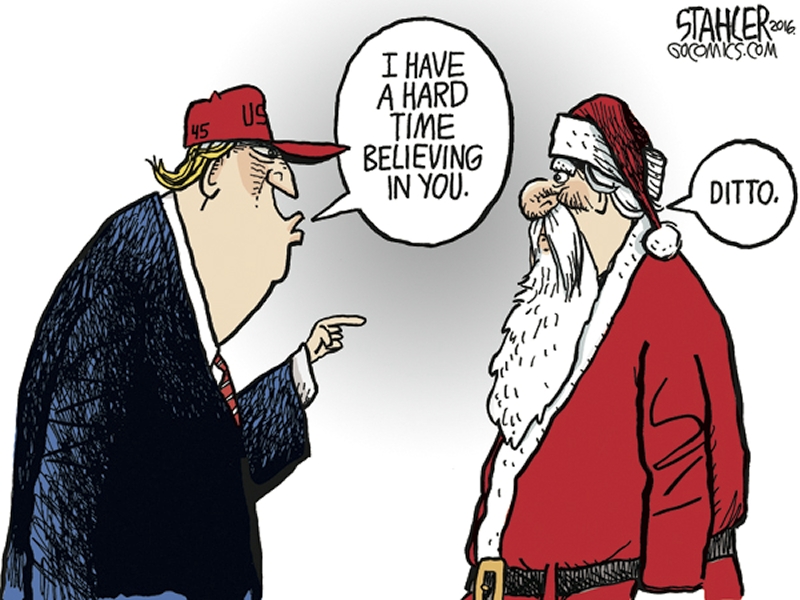 Why, I am often asked, do media cover President Donald Trump so much? For one thing, the answer is in the question: He’s the president. Presidents get covered a lot because what they say — even coughs, sneezes and harrumphs — matters. More important, this president offers us an abundance of stuff to talk about.

Much of that talk of late has zoomed in on whether the president is coming unglued.

Speculation has run vigorously through mainstream media in recent days that President Trump lately has been behaving and speaking strangely, even for President Trump.

A recent report in the New York Times, for example, said that shortly before his inauguration, Trump told a Republican senator that he wanted to investigate the “Access Hollywood” recording that had him boasting about grabbing women’s genitals. Even though he formally apologized for it last year, the Times quotes three unnamed people ‘close to the president’ as saying Trump has continued to suggest that the voice on the tape was not actually his. He needs to make up his mind.

Other sources cited by the Times say the president continues to boast of winning districts that he did not in fact win and that he claims a majority of the women’s vote, even though he actually won less than half. He has even clung to his doubts, says the Times, of the authenticity of former president Barack Obama’s birth certificate, despite his announcement to the contrary last year after five years of promoting the bizarre conspiracy theory.

More recently the worst job in Washington continues to be the translation of Trump’s odd outbursts to make him sound like he really knows what he’s doing. That task fell on White House press secretary Sarah Huckabee Sanders on Thursday when she was asked about the president’s retweeting of three inflammatory anti-Muslim videos from Britain First, a far-right extremist group that targets mosques and Muslims.

Did the president think his retweets, which were rebuked by British Prime Minister Theresa May, had served to “elevate the conversation” about the issues of “extreme violence and terrorism?” Sanders was asked.

“I think what he’s done is elevate the conversation to talk about a real issue and a real threat,” she said. “That’s extreme violence and extreme terrorism, something that we know to be very real and something the president feels strongly about talking about and bringing up.”

If Trump’s remarks are his idea of elevation, to borrow an old blues lyric, we’ve sunk so low in his mind that “bottom looks like up.”

Is Trump losing touch with reality? My initial reaction to that question was a lot like Dorothy Parker’s response to news that former president Calvin Coolidge had died: “How can they tell?”

Every time I think Trump has gone off the deep end, he manages to pull himself back by saying something sensible, even if such moments don’t last long enough to make me completely comfortable with, for example, his access to the nuclear codes.

But maybe keeping us on edge is precisely what he wants. He likes to keep his critics and often his allies off-balance, not quite knowing what to expect from him next. “Chaos candidate” is how one of his opponents branded him during the Republican primaries. He seems to wear the tag of “chaos president” with a smirking pride.

We have long been accustomed to Trump’s freewheeling use of “alternative facts,” as another of his spokeswomen, Kellyanne Conway, famously declared. He also has been accused by various critics of “gaslighting,” a term borrowed from an old stage play and two movies called “Gas Light,” to describe the manipulation of others to sow seeds of doubt about their own memory or sanity.

Could Trump be practicing a version of that on his fellow Americans? As bizarre as Trump’s headline-making tweets and verbal outbursts may be, they also drew attention away from the debate in Congress over a Republican tax bill that, according to some experts, falls way short of keeping Trump’s promises to spare the middle class while raising taxes on the rich.

I’m sure Trump gets a kick out of being the chaos president. It pleases his conservative base to see him gaslight those of us who care about such quaint qualities as facts and consistency. Our challenge as his larger audience is to keep an eye on him without flattering his already-inflated ego — and without sounding as crazy as he too often does.