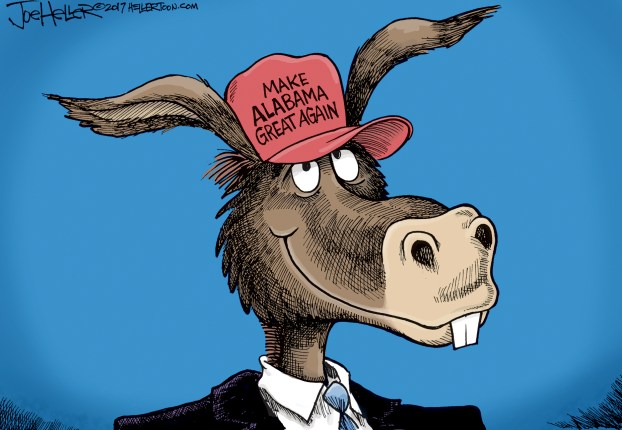 Al Hunt: Republicans are officially on a losing streak Doug Jones, a former federal prosecutor, became the first Democrat to win an Alabama Senate seat in a quarter century. He defeated Roy Moore, a former state Supreme Court justice whom multiple women said had sexually assaulted or harassed them years ago when they were teenagers.

The result is a rebuke to President Donald Trump, who, defying much of the party establishment, embraced Moore’s candidacy.

True, Moore was a profoundly flawed candidate. But a statewide Democratic victory in a Republican stronghold like Alabama, coming only weeks after banner results for Democrats in Virginia and elsewhere, suggests that all the political momentum and enthusiasm is against Trump and Republicans. The Jones win was facilitated by a very good turnout among African Americans.

The Alabama victory is also a huge shot in the arm with Democratic donors. Huge amounts of money poured into the Jones campaign; buoyed by the anti-Trump sentiment, expect a gusher of Democratic campaign money.

Things could change over the next 47 weeks, but this political climate augurs badly for Republicans in the 2018 midterm elections, when they will be defending majorities in both houses.

It also may complicate any legislative agenda next year as Republicans desperately struggle to avoid an anti-Trump wave. The Alabama results diminish any clout the president has on Capitol Hill.

Moreover, with Moore gone and with the current environment, Democrats will focus on the sexual-misconduct accusations against Trump. Already more than 100 members of Congress have demanded that an investigation be opened into the allegations by more than a dozen women that Trump sexually assaulted or harassed them. He has denied these claims, and the White House says the issue was settled by his victory in the presidential election last year.

There are slivers of silver linings for the majority party. One is that the Alabama governor, a Republican, has two weeks to certify the election. That means congressional Republicans would retain their 52-48 margin in the Senate until Christmas, making it easier to pass the massive tax-cut measure on a partisan vote by then.

Even more important for the GOP is not having Moore in the Senate. He would have faced an immediate Ethics Committee investigation and possible expulsion, which would have created bitter schisms in the party.

While Trump and the right-wing base made an effort for Moore, much of the party’s establishment distanced itself. The senior Alabama senator, Republican Richard Shelby, said he didn’t vote for him, due to the character issue; the state’s Republican governor, Kay Ivey, and Senate Majority Leader Mitch McConnell said they believed Moore’s accusers; and dozens of Republicans said his presence would be a powerful weapon for Democrats running against them next year.

But in a catch-22, the loss in Alabama is also a jolt.

Already the Republicans faced a difficult challenge in holding on to the House next year. But the party has been confident of keeping, even adding, to the 52-48 edge in the Senate, since more than 70 percent of the seats up for re-election are now held by Democrats, including a number in states carried by Trump.

But that dynamic has shifted, making McConnell and his allies nervous. With Alabama, and the Senate margin reduced to 51-49, Democrats now only have to win a net of two Senate seats next year. They have a real shot at picking up a couple of seats where Republican senators are retiring, as well as a chance at knocking off one or two incumbents. If the political environment helps their own incumbents, they are within striking distance of winning a majority, though that’s still an uphill battle.

Looking ahead to 2020, the terrain shifts, and a couple dozen Republican incumbents are up for election.

Democrats, at least temporarily, cleared the way to highlight the charges against Moore by pressuring two of their more prominent members, Rep. John Conyers and Sen. Al Franken, both of Minnesota, to resign after charges of sexual misconduct were leveled against them.

The accusations against Moore, now 70, were first reported by The Washington Post a month ago. At least eight women accused him of sexual misconduct dating to when they were young, and most had corroborating confirmations. Moore denied the charges.

Earlier in his career, he was kicked off the Alabama Supreme Court for refusing to enforce laws with which he disagreed. Nevertheless, in the primary he knocked off Luther Strange, who was appointed to fill the Senate vacancy left by Jeff Sessions, now U.S. attorney general.

Jones’ term is through 2020. Trump had attacked Jones as “soft on crime.” But in the 1990s, the former U.S. attorney, personifying the arc of modern Alabama history, had prosecuted, and gained the convictions of, the Ku Klux Klan terrorists who bombed the Birmingham church that killed four black girls in 1963 segregationist Alabama.

Hunt, a Bloomberg View columnist, was the executive editor of Bloomberg News, before which he was a reporter, bureau chief and executive Washington editor at the Wall Street Journal.

Clarence Page: The ‘chaos president’ keeps us guessing — and praying

Why, I am often asked, do media cover President Donald Trump so much? For one thing, the answer is in... read more