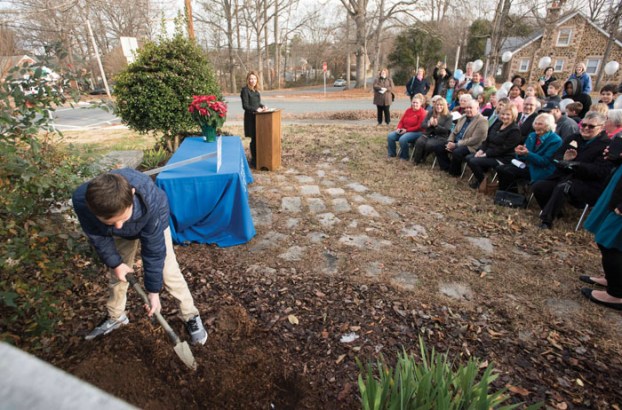 “This was my classroom,” she told her student tour guide.

Wilhelm, a former Granite Quarry teacher and assistant principal, was one of many who returned to their old stomping grounds for the school’s centennial celebration Tuesday.

The celebration featured a tour of the school, a balloon release and a time capsule burial.

“It isn’t often that a school gets to celebrate its 100th birthday,” said Julie Humphreys, Granite Quarry PTA president.

Over the past 100 years, a school has served the town of Granite Quarry in one capacity or another. It’s estimated that at least three school buildings have come and gone over the years — including the current, newer facility housing today’s students.

In the media center, guests snacked on a breakfast buffet and flipped through old scrapbooks made by PTAs of years gone by.

For some former students, the brightly painted halls held no memories. Bill Fisher graduated from the old two-story combined school in 1958.

The building was demolished in the summer of 1996 to make way for a new school. Wilhelm remembers that day clearly — it was while she served as the school’s assistant principal. She said she stood on a corner across the street as the brick structure became “a crumbled pile.”

For some, it was a bitter goodbye.

“I hated when they tore the two-story building down — but that was progress. … We had a lot of fun on that second story,” Fisher said.

Walking through the new hallways, he can remember his high school days clear as a bell. Fisher moved to Granite Quarry in 1950. The house was the first his family lived in that had indoor plumbing.

It was only a block from the school, and Fisher said he used to lie snug in his bed until he heard the 8:15 bell chime.

“And whenever I’d hear that bell, I’d jump up and get ready,” he said.

By the time he made it to class, teachers were already taking roll. As they neared his seat, he said, they’d start to grin, and he would duck in just in time.

“You didn’t think I was coming today, did you?” he’d joke.

In high school, competition got fierce on the football field. Granite Quarry’s rival with the then-Rockwell High School, Fisher said.

“They’d come down and paint our water tower, and we’d go down and lime their fields,” he remembered.

Some things at the school haven’t changed. Humphreys and Principal Catherine Hampton cited a commitment to a quality education being as strong as ever, as is the community’s dedication and involvement in the school.

“We are so grateful to our community and all they have done to leave such a powerful legacy for us to follow,” Hampton said.

The celebration concluded with a time capsule burial. Each grade contributed items, and the capsule will be unearthed in 25 years. Humphreys said she hopes the school lasts far longer.

“I always think about if walls could talk, what would they say about this school? I can’t wait to hear what they’ll say in another 100 years,” she said.