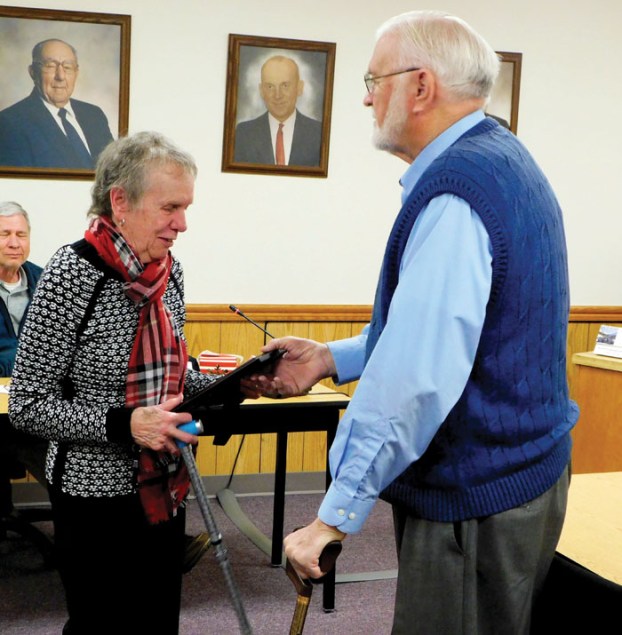 Rockwell Mayor Beau Taylor presents Barbara Wingerson a proclamation honoring the memory of the late Chuck Wingerson for his contributions to the community. Photo by Police Chief Hugh Bost

Rockwell Board of Aldermen recognizes service of former member

ROCKWELL — The Rockwell Board of Aldermen welcomed a new member and remembered a former one at its monthly meeting at Town Hall on Monday evening .

The newest board member, Justin Crews, was sworn into office along with incumbents who were re-elected.

The board then approved a proclamation in honor of former Alderman Chuck Wingerson, who passed away in September.

Before taking the oath of office, the aldermen held two public hearings on rezoning.

The first case was a request to change the zoning of four parcels near Link Street and Crescent Road from a residential to industrial.

The second was a request to change three parcels near China Grove Highway from R1 to R2 zoning to bring the area into compliance with its current development.

Both requests were approved.

The swearing-ins followed the public hearings. The board members welcomed Crews to join them at the front of the room. Crews, who previously served two terms on the Board of Aldermen, was warmly welcomed by other members.

The aldermen re-elected Chuck Bowen as mayor pro tem. In addition, the department heads and town attorney were reappointed as well.

Mayor Beau Taylor presented the Wingerson proclamation in memory of the former alderman. Taylor said the proclamation was to “recognize the significant contribution of Chuck and extend the board’s sincere condolences to his family.”

Barbara Wingerson, Chuck Wingerson’s widow, was presented a copy of the proclamation by Taylor.

The proclamation was followed by committee reports. Most committees had little to report with the exception of the Police Department and the Rowan-Salisbury Schools Capital Needs Committee.

Police Chief Hugh Bost Jr. said the holiday season, which he called “silly season,” has begun. Bost warned that this time of year usually means “increases in car break-ins, larceny, and other petty crimes, so be mindful where you park and what you leave out.”

Alderwoman Stephanie Walker delivered the school system’s capital needs report. She discussed the recommendation for a one- to five-year plan to redistrict, close and consolidate as many as 13 schools with low attendance and old buildings.

Final decisions on redistricting and consolidation will be left to the school board.

There was no new business to be addressed before the board had an executive session to discuss legal matters.

SALISBURY — I’ve been wracking my brain to figure out the last time I saw Harold Earnhardt. I still feel... read more