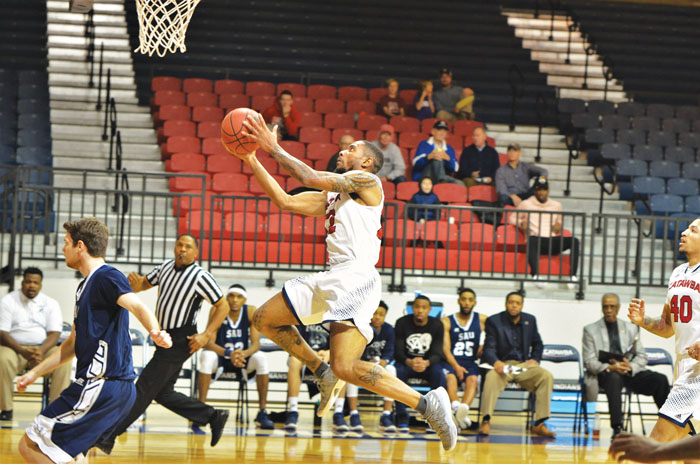 SALISBURY —It didn’t go exactly as diagrammed, but the Catawba men’s basketball team put the brakes on its three-game losing streak Tuesday night.

The Indians were a hard team to read after refocusing in overtime and gaining a 76-73 non-conference win against visiting St. Augustine’s.

“It feels like we had to win the game twice,” coach Rob Perron said after Catawba (3-5) coughed up all of a 17-point first-half lead before rallying in OT. “This wasn’t how we planned it, but it was really great to see somebody else step up, besides the normal suspects.”

That suspect in question was sophomore guard R.J. Robinson, who scored the first two baskets in overtime after Catawba failed to convert a field goal attempt over the last 7:41 of regulation.

“We knew if we could score the first bucket in overtime, we could win the game,” senior Jerrin Morrison said after netting a game-high 37 points. “R.J. made two clutch shots in OT. There’s nothing you can say but ‘thank you.'”

The win — Catawba’s first since Nov. 21 — seemed to be secured in the opening eight minutes, when the Indians hit nine of their first 13 shots from the floor and opened a 19-7 lead. Later in the half, when Morrison pulled up and knocked down his fifth 3-pointer, the hosts led, 38-21.

“They punched us in the mouth in the beginning,” St. Aug’s coach MarQus Johnson said, after the Falcons dropped to 2-8. “But give credit to Catawba. They were resilient. They fought us off down the stretch.”

And by doing so, the Indians avoided what would have been an embarrassing loss. Catawba never trailed, but was unable to deliver a knockout blow in the second half. After shooting 55 percent from the field in the first half, it made only six of 24 attempts in the second. A ferocious comeback by St. Aug’s began after Catawba’s T.J. Jeffers hit a 14-foot jumper that made it 55-40 with less than eight minutes to play.

“And then we became lackadaisical,” Morrison said, after shooting 12-for-25 from the field. “They went to a zone and that slowed us down. We needed to swing, swing, swing the ball around a little more, but we stopped making shots.”

St. Augustine’s caught up when junior Tyre Gathright — who scored 17 of his team-best 31 points in the second half — buried a 3-pointer from deep in the left corner with three seconds to play.

“It’s almost like we got stagnant at the end,” Catawba’s Malik Constantine said. “But that was a big-time shot by a big-time player.”

It didn’t surprise Johnson, whose team has fought the injury and illness bug this season. “We expect those things out of Tyre,” he said. “He’s always been a clutch player.”

All it did was set the stage for Robinson’s heroics. He opened the extra session with jump shot from the foul line, snapping a 64-64 tie. Less than a minute later, he connected on a tape-measure 3-ball from the right side that put Catawba ahead by five. The outcome was all-but-cemented when St. Aug’s guard Kenneth Collins lost a ball out of bounds with 18.2 seconds on the clock.

“It’s a different team from last year and everybody’s adjusting to their roles,” Perron said. “We want to learn winning, not losing. That’s got to be key for us. This game provided valuable experience for the stretch run.”

NOTES: Six-foot-7 Quincy January had 20 points and 20 rebounds for St. Aug’s. … Senior guard Jameel Taylor played his second game since returning from a high ankle sprain suffered in the season-opener. He contributed nine points, seven assists and five rebounds. “He’s finding his sea legs,” Perron said. “But Jameel Taylor at 70 percent is a lot better than some other guys at a hundred.” … North Rowan grad Henderson Lentz drained a 3-pointer that gave Catawba a 51-38 edge with 11:10 remaining in the second half. … Constantine snatched 11 rebounds, but the Indians were soundly beaten off the boards, 49-35. … Catawba returns to SAC play Saturday afternoon when Anderson visits Goodman Gym.