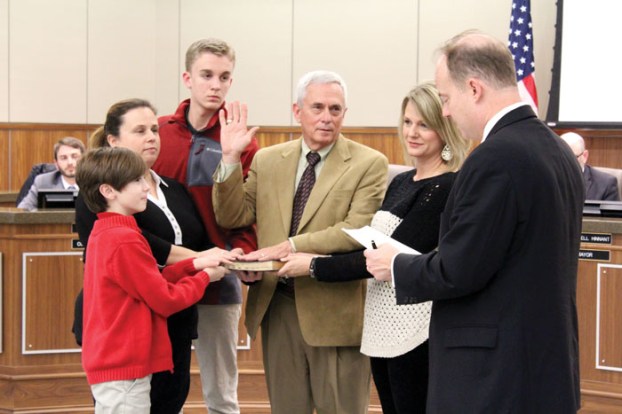 Van Rowell being sworn in. Holding the Bible for him are his daughters Leigh Hopkins and Allison Wightman and grandsons Alan Hopkins and J.D. Wightman. Photo by Andie Foley, Salisbury Post.

Council members excited for future as Kannapolis swears in mayor

KANNAPOLIS — Excitement for the future abounded Monday as Kannapolis swore in its mayor and three City Council members.

Incumbent Mayor Darrell Hinnant has served on the City Council since 2001. He was first elected mayor in 2013 and was re-elected to a third term in November.

This was Kannapolis’ 18th swearing-in of city leaders. The city was incorporated in 1984.

“Some communities have sworn in 100 times, but for us this is still new and exciting,” Hinnant said.

He said some voters use elections to pick newcomers and change their city’s direction. He was excited when Kannapolis voters did not find that necessary.

“In some ways, that was an easy decision for the community because things are going very, very well in Kannapolis,” he said. “ … Kannapolis is booming. We will be over 50,000 residents by the end of 2019. Opportunities are abundant, and this trend is expected to continue.”

Hinnant spoke at length about progress, citing downtown revitalization that includes a new park; eight commercial projects that include Amazon adding 200 jobs; and the addition of 287 apartments and more than 500 homes in the area.

“These next two years are going to be critical,” he said. “We must value engineer every single project to ensure that our resources are stretched so that we can meet the opportunities that are before us.”

“I think that we are probably one of the most aggressive city councils that has ever existed in the city’s history, and I’m very proud and honored to be a part of that group,” he said. “I don’t take it lightly. I don’t think any of us do.”

In other business at Monday’s meeting:

• Incumbent council members Dianne Berry and Doug Wilson were sworn in for new terms, as was newcomer Van Rowell.

• Dianne Berry was chosen as mayor pro tem. She was nominated by Dayvault, with the nomination seconded by outgoing Mayor pro tem Wilson.

• A public hearing was held about collateral for the debt issued for several capital projects.

The projects include greenway improvements, two fire stations, improvements to city property on Cannon Boulevard (a future Rowan-Cabarrus Community College site), downtown infrastructure and a parking deck, and the sports and entertainment venue.

No residents spoke during the hearing’s time for public comment.

• The council approved the second amendment for Phase 2 of the Downtown Infrastructure Project.

• The council approved contractual amendments necessary for the issuance of limited obligation bonds. It also approved an application to the Local Government Commission for approval to issue water and sewer revenue bonds.

• The council appointed Berry to serve on the Concord Kannapolis Transit Authority Commission.

Berry will take the place of Darrell Jackson, who is no longer on the City Council.

Both Berry and Councilman Tom Kincaid were nominated. Berry was picked on a 4-3 vote.

Rockwell Board of Aldermen recognizes service of former member

By Spencer Dixon ROCKWELL — The Rockwell Board of Aldermen welcomed a new member and remembered a former one at its... read more