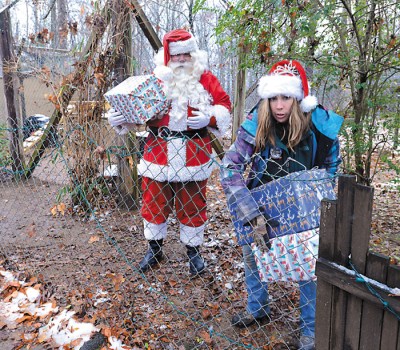 "Santa and Erin Carey (wildlife director) place gifts for the animals in their hatitats at the "Christmas with Claws" event .. photo by Wayne Hinshaw, for the Salisbury Post 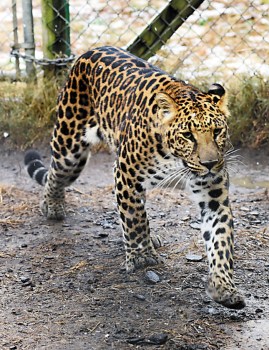 "Xavier" a spotted leopard with it snowing at the "Christmas with Claws." photo by Wayne Hinshaw, for the Salisbury Post 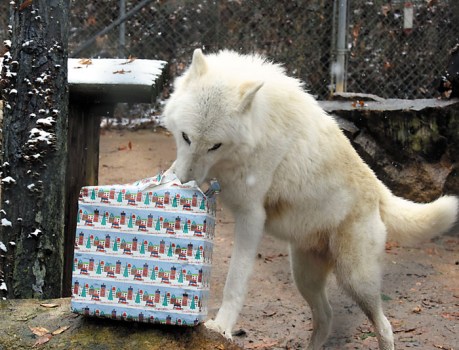 "Luna" a white female wolf bits into her gift box in the snow at the "Christmas with Claws." photo by Wayne Hinshaw, for the Salisbury Post 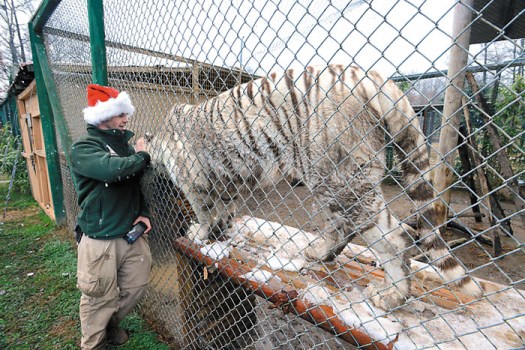 "Miracle," a Bengal Tiger, at the "Christmas with Claws" event wanting some affection from one of the staff. photo by Wayne Hinshaw, for the Salisbury Post 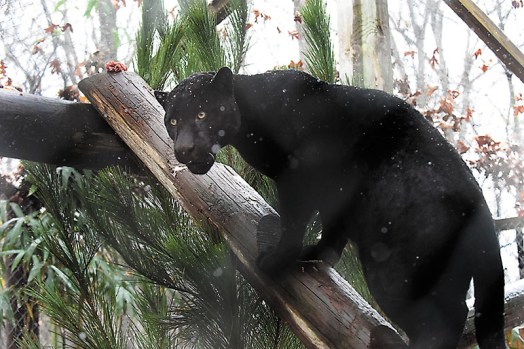 One of the new jaguars found a Christmas gift of meat in the snow at the "Christmas with Claws." Photo by Wayne Hinshaw, for the Salisbury Post

ROCKWELL — What’s a Bengal tiger want for Christmas? Presents, of course, and it took 9-year-old Miracle about 30 seconds Saturday before she nosed one of her gifts to the ground.

For the Tiger World crowd gathered outside her fence, Miracle then took a roll in the mud, rubbed up against a post and visited wildlife director Erin Carey. But Miracle waited until most of the people moved on to see the leopards before she returned to that same wrapped present and ripped it open.

Miracle dug into the pinecones, snacks and luxurious scents inside. Boxes can be enrichment experiences, Carey explained, and these wrapped presents handed out Saturday by Santa — a.k.a. Rick Drake — stimulated all the tiger’s senses.

Tiger World founder Lea Jaunakais officially cut the ribbon to the jaguar habitat Saturday as part of a day the animal conservation center called “Christmas with the Claws.”

Aztec and Zander appeared to enjoy their presents from Santa, too. Their new habitat includes a waterfall, climbing structures, rocks for perching, toys for playing and a viewing window through which visitors can take a better look and see them up close.

The one-and-a-half year jaguars were rescued in February from a place in Alabama, and they represent Tiger World’s first jaguars in several years. Tiger World has 54 different species and 109 individual animals, including examples of the four big cats — tigers, lions, leopards and now jaguars.

Four out of five animals at the nonprofit Tiger World are rescued animals. The center, located at 4400 Cook Road, is dedicated to rescue, rehabilitation, education and preservation of exotic animals.

Jaunakais said the unveiling of the jaguar exhibit was a long time in the making, “and it took everyone at Tiger World to make it happen.”

After Tiger World received Aztec and Zander in February, Carey and wildlife specialist Rachel Greer worked daily in trying to desensitize the jaguars and get them used to a new environment that was without their parents. These cats actually had been with their parents too long (10 months), and it made their acclimation that much tougher.

“It is intense,” Carey said.

On arrival, the jaguars had to be quarantined for a period. Carey and Greer had to become friendly enough with them to be able to administer the shots they required. Then came months of making them increasingly familiar to all the new things and people around them, including Tiger World visitors.

The brother jaguars are mostly black, with large broken rosettes in their coats.

Jaguars grow to be 5 to 8 feet long and 100 to 300 pounds. Carey said Aztec and Zander eat 8 pounds of meat a day. The brothers look identical to visitors, but Greer and Carey can tell them apart by their facial features, plus Zander is a bit bigger.

Jaguars are the largest species of cat found in the Western hemisphere and the only big cat in North America. In the United States, you can find them in Arizona, New Mexico and Texas.

In delivering presents to the animals Saturday, Drake, as Santa, was assisted by Mrs. Claus (wife Robin Drake) and many elves, including Jan, Randy, Alora and Evan Drake; Katie Whitaker; and Marisa Dreher.

Their stops included wolves Luna and Snowball, leopards Xavier and Mystique and cougars Jake and Katrina.

But for Carey, the day belonged to the jaguars and their new habitat.

“Santa was all well and good,” she said, “but this was my Christmas present, getting it open.”