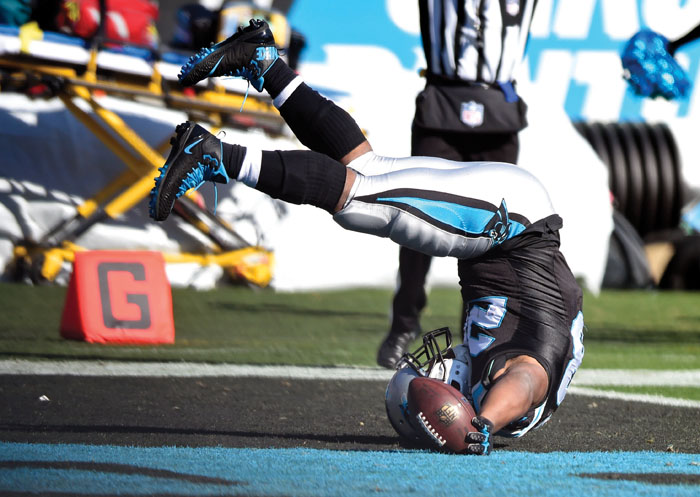 Carolina Panthers' Jonathan Stewart (28) falls into the end zone for a touchdown against the Minnesota Vikings during the first half of an NFL football game in Charlotte, N.C., Sunday, Dec. 10, 2017. (AP Photo/Mike McCarn)

CHARLOTTE (AP) — Jonathan Stewart seems determined that nobody is going to write the epitaph on his NFL career just yet.

The Panthers 30-year-old running back and all-time leading rusher has played 129 games in his NFL career, but had never run for more than two touchdowns in a game.

That ended Sunday when Stewart matched his entire 2017 scoring production with TD runs of 60, 1 and 1 yards in Carolina’s 31-24 win over the Minnesota Vikings.

“We didn’t doubt him,” said Panthers coach Ron Rivera. “That’s why we kept putting Jonathan out there. We believe in who he is, and he has been solid.”

Stewart’s first score came on a 60-yard run on third-and-1 in the first quarter, which gave the Panthers an early lead. The Vikings had stacked the box against the Panthers’ jumbo offensive set, and left guard Andrew Norwell pulled to make the key block to spring Stewart.

“You hope to just see a hole open because you just know there’s no one else in the secondary,” said Stewart.

Stewart scored on a 1-yard run on the second play of the second quarter, and his over-the-top 1-yard score with 1:47 left was the difference.  He finished with 103 yards on 16 carries for his second 100-yard performance of the season.

Three-time Pro Bowler Olsen said he had a goal when he played his second game since missing 10 weeks with a broken right foot.

“I wanted to be on the field in victory formation,” he said. “That means I played the whole game and we won.”

Olsen was only targeted once and did not make a reception, but he finished the game. He did leave the field briefly in the first half, after taking a hit on the right ankle.

“It felt good to get back out there, play a full game, kind of get my legs under me a little bit,” said Olsen. “It’s been a while since I’ve played a good amount of stats.”

Panthers coach Ron Rivera said he wants to get Olsen more involved in the offense next week against Green Bay.

Center Ryan Kalil played the entire game for Carolina, the first time he has done that since Week 1 because of a lingering neck injury.

The Vikings sacked Cam Newton eight times last season, but only got to him twice on Sunday. Newton said he tried to get the ball out faster this time around.

He also was a problem for the Vikings in the running game, picking up 75 yards — including a key 62-yard run to set up the go-ahead touchdown with 2:00 remaining.

Newton, who had a 69-yard run in Week 10, is the first quarterback in the Super Bowl era to have multiple 60-yard plus rushes in a single season.

The Vikings entered Sunday’s game at Carolina holding opposing quarterbacks to 4.7 yards per carry. Drew Brees, Joe Flacco and Matt Ryan, though, don’t exactly draw the same attention as Cam Newton, who has averaged 78 yards rushing in the past six games.

It seems there is no stopping Adam Thielen. The Vikings wide receiver has averaged 105.3 yards receiving over the last six games, with four touchdowns during that span.

Minnesota’s problem Sunday was its running backs never got on track against Carolina. They were held to 60 yards on 16 carries.

The Vikings’ offensive line continues to struggle with injuries. Starting left tackle Riley Reiff left Sunday’s game with an ankle injury and was replaced by Rashod Hill. Reiff had his foot in a boot after the game, but his long-term status is unknown.

The Vikings started the game without right tackle Mike Remmers and center Pat Elflein because of injuries. The hope is that all three will be back for the playoffs.

The Vikings will have to wait another week for a chance to win their second division title in three years. Tight end Kyle Rudolph said that is not the goal. They’re hoping to become the first team to play the Super Bowl in its own stadium.

“We’re not satisfied with that, though,” Rudolph said. “Our goals and expectations have moved on. We want to make sure everyone has to come through U.S. Bank Stadium. We need to get this division wrapped up, but to do that, we have to play better.”