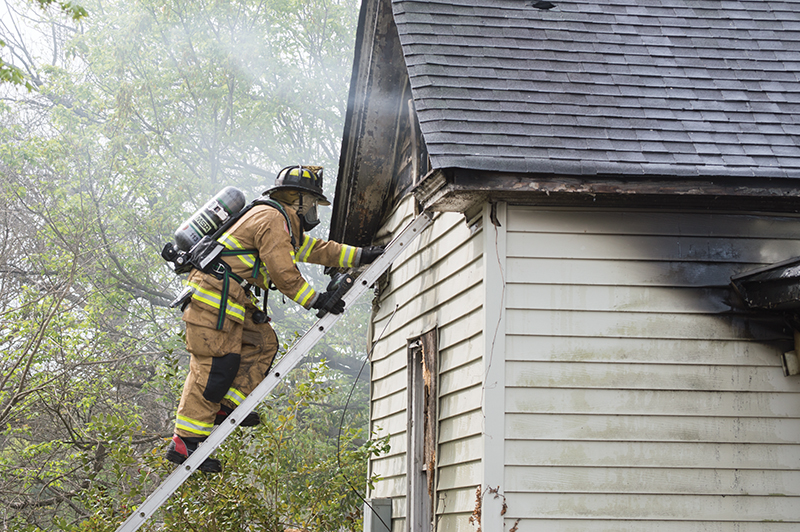 A firefighter climbs up a ladder on Wednesday during a fire near the intersection of Hill Street and Cooper Street in Salisbury. No one was hurt in the fire.

The celebration of Salisbury Fire Department’s 200 years is about more than fire trucks and fire stations. It’s about men in generation after generation — and women, more recently — stepping up to protect the community.

They say if you want to fight fires and save lives every day, you shouldn’t aim for a career in firefighting. There’s a lot of work to do between fires that is less glamorous. Medical calls. False alarms. Training exercises. Equipment maintenance.

Days or even weeks can pass without having to actually battle a blaze.

When flames do flare up, though, firefighters have a crucial job to carry out. Every bit of training, experience and equipment may be mission critical to saving someone’s life or preventing widespread destruction. Courage is a prerequisite, along with a sharp mind and physical strength.

Firefighting has progressed from bucket brigades to horse-drawn wagons to fire trucks loaded with the latest technology. The type of flames firefighters encounter have changed, too. Wood, paper and cloth were most of what burned in the early days. Many of the materials found in buildings today put off toxic fumes and can even be explosive. Breathing equipment is often a necessity.

And sometimes something goes wrong.

It’s tragic when anyone dies in a fire, but it’s especially cruel for firefighters. When former Fire Chief Sam Brady was interviewed as he approached retirement in 2004, he talked about an incident from his third year as a firefighter, 1971 — when fellow firefighter Joe Jenkins attempted a solo rescue in a burning building, became disoriented and walked into a wall of fire. Jenkins is one of four Salisbury firefighters to die on duty. The others are Capt. John Cross in 1961 and Vic Isler and Justin Monroe in the Salisbury Millwork Fire in 2008 — still so painful to remember.

The community can never sufficiently thank all the people who have put their lives on the line as firefighters. What we can do is make sure they are adequately paid, trained, equipped — and respected.