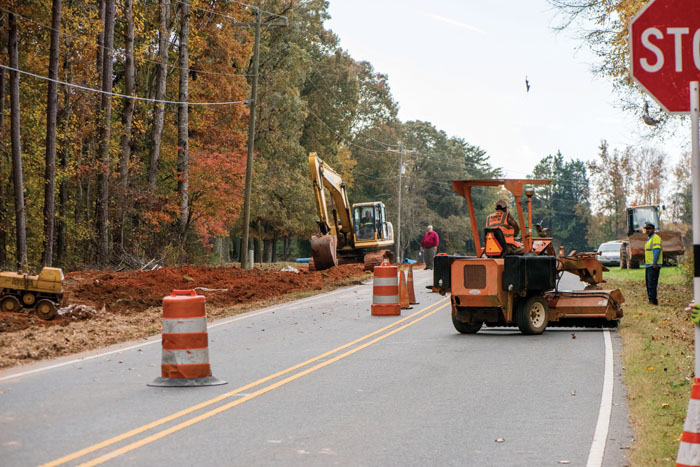 EAST SPENCER — The construction of the new 12-inch water main on Choate Road in East Spencer is nearing completion and work will continue into next year on the rest of the more than $2.4 million project.

Choate Road is the first phase of the effort to improve the water supply and provide better pressure throughout the town. The Water Infrastructure System project is scheduled to be completed in May 2018.

“We are delighted to see this much-needed water system improvements work underway and to have the Choate Road line already in the ground,” Mayor Barbara Mallett said.

For years the town has experienced extremely high water rates and low pressure in some areas. In fact, in 2014 East Spencer’s water supply was shut down during the Dunbar Center fire, highlighting an already weak water system.

Firefighters used so much water it had to be hauled from nearby Spencer.

Also in 2014, the town began working with the N.C. Rural Water Association, a group that was able to study the town’s water system, specifically the amount of water it was losing. Officials with the water association and the town discovered 20 leaks within the system.

Town officials estimate that work on the meter vault near Hanford Dole Elementary School should get underway next week. In addition, bores under Choate Road and the Choate Road Extension are now slated to complete the connection to existing lines near the Aldi’s Distribution Center off Andrews Street.

This month and into January, crews will begin laying new water lines and making replacement service connections for homes and businesses. The neighborhoods situated on Correll, Boundary and Second streets are the first to receive new water lines, connections and other system-related improvements, said Interim Town Administrator F.E. Isenhour.

“We are anticipating the project completion will be about six more months and we strive to keep folks aware of when work will be undertaken in their neighborhoods,” Isenhour said.

Project Engineer Jared Wright with McGill Associates reports that about 28 water customers in the Correll and Boundary streets area will receive new connections and approximately 136 services will be upgraded.

It is also projected that the next area to receive work is Cauble Place, Broad Street and Adam Street neighborhoods.

The project will include Correll, Boundary, Second, Broad and Spencer streets. The project will also incorporate some of Henderson, Grant, Hill, Division and Weant streets.