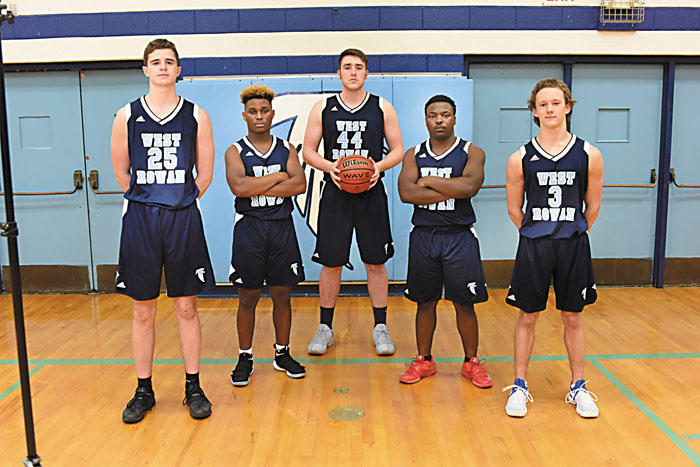 MOUNT ULLA — Longtime coach Mike Gurley has only one question for the members of West Rowan’s boys basketball team: Are you in or are you out?

Gurley is asking for commitment and investment from the Falcons, who return 6-foot-8 senior Caleb Mauldin and a cast of maybes from a team that overachieved last winter. There are five lettermen in uniform — heart-and-soul players who helped West go 18-10 overall, 12-6 in the SPC and earn a first-place trophy in the Christmas tournament.

“Last year, we used our defense to stifle teams,” said Gurley, whose squad dropped four decisions to Cox Mill and a pair to Hickory Ridge in 2016-17, extending its season into the second round of the 3A state playoffs. “There weren’t any big scoring runs against us. We were really good defensively and rebounding the ball. It was a good team.”

That was then, this is now. So while this year’s team has been realigned to the less-stringent North Piedmont Conference and is essentially a blank canvas, Gurley has remained a man with optimism coursing through his veins. He’s ready to work his magic once again.

“I’m a positive guy,” he said. “And I think we could be a good team. Yes, we’re going to get knocked down. Everybody does — that’s called life. But we have to keep getting up, keep trying to move forward. We’ve got 11 non-conference games and three Christmas tournament games to figure this thing out.”

The face that keeps showing up at both ends of the court belongs to Mauldin. Now a 225-pound anchor, he averaged 19 points and 13 rebounds per game last season and was selected Rowan County Player of the Year.

“I love him to death,” said Gurley. “He’s so coachable, so willing to please. Anything I ask him to do, he does.”

This year, Gurley is asking Mauldin to be a little meaner. “I want Caleb to be the man,” he said. “And you do that by playing a little on the nasty side. I don’t want him to be Bill Laimbeer (former Detroit Pistons bad boy), but I want him to be tough.”

Mauldin surpassed 1,400 career points in West’s season-opening loss to Lake Norman and was averaging 26.8 per outing through four games this season. “We need to use him as our beacon,” Gurley said. “If we can get him the ball, that will open up our shooters.”

That’s the formula, but whether or not it succeeds depends largely on distributor Martavio Rankin. At 5-7, the senior looks more like a second-baseman than a point guard, but he’ll be a stabilizing force in the backcourt. Armed with an enticing toolbox, he’ll be trusted to orchestrate a serviceable offense.

“He’s cerebral,” said Gurley. “Understands the game and plays at a high level. He’s trying to be that team leader with Caleb and doing it two ways — vocally and with his play. If he stays status quo he’s going to have a really good year.”

Beyond those two, finding any offense in West’s lineup may require a search party. Junior Payne Stolsworth has emerged as a dependable shooter with keen eye. A 6-2 forward, he knocked down five 3-pointers within 10 minutes in a late-November loss to Davie County. “A good shooter with good size,” Gurley said.

Other forwards in the fold include promising sophomores Tykese Warren (6-2), Jay Joseph (6-0) and Johnny Hassard (6-5) and steady senior Cole Myers (6-6), a returning letterman with a knack for finding open space on the floor. Warren is a first-year varsity player who needs game experience. Same with Joseph, who saw action in one game a year ago. Hassard is “all of 230 pounds,” according to Gurley and needs to feel the game more, something that comes only with experience.

Senior guards Josiah Dixon and Logan Sproul are undersized but crafty. Junior Zach Brawley is a 2-guard who will contribute points and energy. Gurley hopes they’ll become better ball-handlers, something he indicates is a team weakness along with rebounding strength.

“We have some really good, competitive guys,” the coach said. “But we don’t have a Kyrie Irving. We don’t have that one-man, press-breaker kind of guy.”

What they do have is Mauldin, Rankin and a group of gym-class heroes. Gurley will spend the season truly coaching — teaching ball control, team defense, rebounding and working for high-percentage shots.

“If we can get good at those things, everything else we’re trying to do will evolve,” he noted. “I like this team. We’re not going to back down. The 10 guys on that roster are really invested. They’ve made a commitment.”

Sounds like that’s one question that’s already been answered.