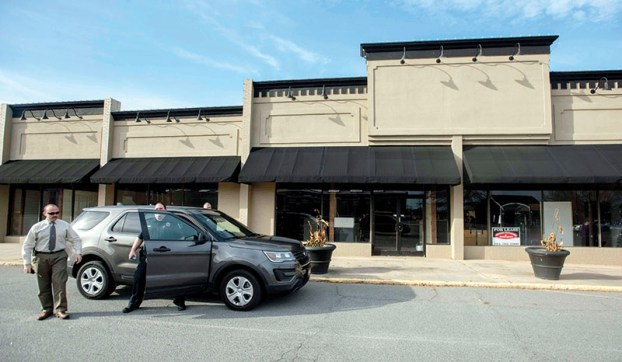 The Park Plaza: Past and future

SPENCER — At one time, the block between Fifth and Fourth streets was the heart of the town. It was a park, and the town gathered there on warm afternoons to hold dances, cookouts and celebrations.

“’What’s the next step to bring people into town?’” Spencer Town Manager Reid Walters said the group likely asked. “… So they built a strip mall there because retail was the future of getting people to come to your town.”

The park was cut down, and a large shopping complex built in its place — the Park Plaza. Post articles from 1964 show an eagerness for a new A&P and businesses flocking to move into storefronts.

But the prosperity didn’t last. For one reason or another, the Park Plaza became a revolving door, struggling to keep businesses and tenants. Previous Post articles show the town scrambling to come up with a use for the property as early as 1993. Ten years later, Spencer worked with KKA Architects in the hopes of renovating the complex to make it more attractive to businesses.

The plan hinged on getting a $1 million urban redevelopment grant from the N.C. Department of Commerce — but the town’s application was rejected in September 2003. By 2004, the plaza’s then-owners were looking to sell it.

Roughly 15 years later — and more than 50 years after initial construction — some of the store fronts have been vacant for 25 years or more, according to Walters. And Spencer hopes it’s finally found the answer to an area town officials have referred to as “a sea of concrete.” A bold new plan proposed at a November 2017 Board of Aldermen meeting suggested moving town offices into a section of the plaza.

Town officials hope the proposal will kill two birds with one stone by bringing new life to the plaza and by moving municipal operations out of an aging, restrictive building.

The current municipal building was constructed by Southern Railroad in 1971 as a dormitory building for rail workers. The town of Spencer purchased it in 1981, and moved town offices there in 1983.

The building required a few renovations to make it suitable for municipal government. Walls were blown out to make space for a lobby, a boardroom and a holding area in the police department.

But the town quickly learned that the interior cement block walls were load bearing, Walters said, and any further renovation plans ground to a halt. But the damage had been done — Walters said that the building was structurally compromised.

And while it’s not to a degree that’s dangerous, Walters said it’s likely exacerbated other problems as the building aged, and it’s made it nearly impossible to make any significant changes or upgrades.

“There’s no way to update systems in the building,” Walters said.

A 2015 space needs study by ADW Architects highlighted outdated electrical and plumbing systems, as well as a leaky roof, exposed foundation, cracking masonry and crumbling mortar. Currently, the only way to heat or cool the building is using old, outdated motel-style window units, which can only control one room at a time and are expensive to run.

“In the height of winter the town has like a $5,000 electric bill,” Walters said.

In summer, the unit in the boardroom has to be turned off during meetings to cut back on noise, the study noted.

But the biggest concern is the police department. Crammed into the back half of one wing, the department has rapidly run out of room.

The narrow hallway opens to small offices on either side — most of which haven’t changed from their dormitory days, except now they house a desk instead of a bed.

The department’s evidence room is no different, and is stuffed with shelves full of bags and boxes. Police Chief Mike James said that evidence can be stored there indefinitely until it’s needed by the court.

The small space forces the department to store new evidence in high school-style lockers lining the hall — which has more than one drawback. The lockers aren’t airtight, and scents leak out into the hall and nearby offices with ease.

“The marijuana today is so potent that when we seize it we’re sitting here in our offices smelling it all day,” James explained about the lockers.

And if there was a death and the victim’s clothes are required for evidence, they, too, go in the lockers — regardless of what bodily fluids may be on them. After a time, they begin to smell.

“And you literally smell death all day,” James said. “…There’s days I just walk outside just to breathe.”

The department does have other evidence rooms, but the building’s dormitory shape means they’re in a separate wing, and officers have to go through the lobby and boardroom to get to them.

And the old technology in the building makes it difficult to keep up with rapidly changing forensics. According to James, DNA evidence is supposed to be stored in a temperature-controlled room — but all the current building has is window HVAC units.

“That’s the only means we have to keep some temperature control,” he said.

The department also has a single room it uses to both hold inmates and to have people wait to be fingerprinted for background checks — there is no other space.

“We may have a nice lady and a felon, and the lady wants to work at the daycare and they’re in the same room together. …That does happen. It happens often,” James said.

But Spencer’s police department is dedicated, and officers don’t let the limited space stop them from doing their job effectively.

“You do what you gotta do,” James said.

Still, the police department’s space and technological needs were one of the main reasons cited for considering the move to the Park Plaza.

Currently, municipal offices utilize about 10,500 square feet. But according to the space needs study, they actually need about 17,000 square feet. And in just three years, that need is expected to be roughly 18,000.

In November, the town entered a purchase agreement with PI Holdings, LLC, which owns the Park Plaza. Spencer hopes to purchase 20,000 square feet of the building — roughly half of the plaza’s storefront — as well as an outparcel on the corner of South Salisbury Avenue and Fifth Street.

The negotiated purchase price, listed in the purchase agreement proposal, is $668,000. According to Walters, the town is well able to afford the purchase of the property. And the estimated $1.4 million renovation of the space could be paid for with financing. PI Holdings also agreed to update the roof and façade of the plaza’s remainder to match town updates.

Other options the town considered included building a brand new municipal building. But Walters said price estimates for this option exceeded $6 million, and would result in a 10- to 13- cent tax hike for residents.

“I think what makes this one of the better options is the affordability of it,” Walters said of the Plaza path.

Tentative plans have the town planning to utilize 12,000 square feet of the space and rent out the other 8,000.

“There are multiple things that could be done with space that large,” Walters said of the rental space.

It doesn’t have to be retail, he said — the space could easily fit light industrial or advanced manufacturing work. The outparcel by the street would also be turned into a park, to break up the concrete landscape.

Currently, the town is in the process of conducting a phase I environmental study on the building.

After that, Walters said the project will still need to get fire marshal approval, renovation bids, an architect’s letter regarding all permits and findings, bank financing established, hold a public hearing and come up with a resolution of findings.

And then, since the renovation would require financing, the entire project would have to get approved by the Local Government Commission.

While the town considered every possibility, Walters said the Plaza is the one that had the best feasibility and best long-term return.

“This is probably the best scenario possible — if it’s possible,” he said. “There’s still a lot of hoops to jump through.”

The affordability of the Park Plaza makes it an attractive option, as does the space. But what Walters — and others — have eyes on is the future.

Not only does the Park Plaza option offer the town space to grow; town officials said they hope that having the police department in the plaza will attract other tenants, and entice those visiting the N.C. Transportation Museum to cross the street and explore all the good Spencer has to offer.

By Rebecca Rider rebecca.rider@salisburypost.com SPENCER — Sharon Hovis expected a roadblock or two on her way to holding a historic position... read more