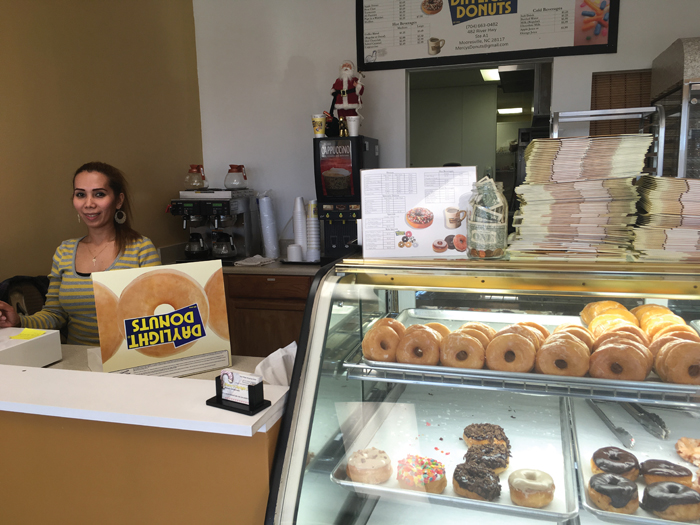 MOORESVILLE —Mercy Lyerly has lived in Salisbury for the last 12 years. But, almost two years ago, she and her husband, Mark, decided to open up a business in Mooresville.

They will celebrate the second anniversary of their doughnut shop, Mercy’s Daylight Donuts, Jan. 10.

Although Mercy, a Filipino immigrant, has lived in Salisbury since she moved to the United States, she worked at NGK Ceramics in Mooresville for the first nine of those 12 years.

She said that, during those years, she noticed that Mooresville had more foot traffic than Salisbury.

“And everywhere you go, they’re building houses in this area. And then you turn around … always new business coming up in this area. So I think that it’s the best place to open up a business,” Mercy said.

But she said that, in the almost two years since she opened her doughnut shop, she has seen Salisbury grow into a place where she would consider opening a business.

For now, Mercy said that she has developed a good reputation with her Mooresville customers.

“They’re home here. They talk to us, you know, they tell stories. And we feel like family down here sometimes and we talk. It’s a connection, you know?” Mercy said.

Mercy, who taught herself to make doughnuts when she opened the shop in January 2016, said that the best thing about her job is getting to know the customers.

Mercy and her mother, Leonarda Domantay, make their doughnuts from scratch every day. But Mercy’s friend and coworker Shiela Windover said that’s not what makes their doughnut store special.

“I think the difference is, when the customers come here, we make sure that we give what they want. And, for example, let’s say they’re looking for a specific thing. We ask them what they want and she’ll make it for them right there,” Windover said.

Windover said that even if the request is unusual, they still try to make what customers request.

“Because she has the ingredients in the back, she said, ‘OK, I’ll try to make it.’ That’s why, every time, they’re happy when they leave,” Windover said.

Since Daylight Donuts is a chain restaurant, the ingredients for the doughnuts are the same as they would be at any of the other nearly 1,000 Daylight Donuts locations in the world.

But Mercy said that, since she and Mark independently own their Daylight Donuts restaurant, they could decorate it and run it in their own way.

And that way, Mercy said, revolves around making sure their customers are happy.

“Even though you have a good doughnut, if you don’t have good customer service, the people will not come back. So I found out that the best thing in having the business is not just about the product. It’s about the people,” Mercy said.

Mercy’s Daylight Donuts is located at 428-A1 River Highway in Mooresville. The shop offers a variety of doughnuts and pastries, coffee and free Wi-Fi.