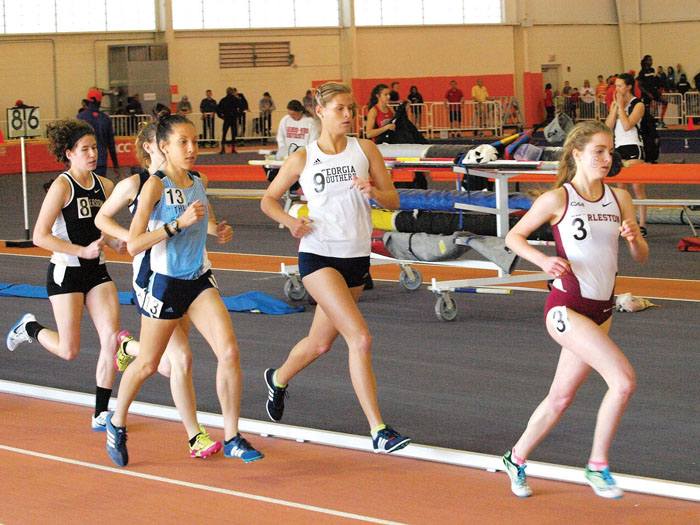 I knew Mike Parker as a softball teammate and it was fun to watch his daughter begin to excel as a high school cross-country and track runner seven years ago. Recruited at the Division 1 level, Rebecca Parker chose Georgia Southern University in Statesboro, Ga. She recently completed eligibility in cross country and I thought it would be fun to check in to get her career impressions so far.

A major highlight of Rebecca’s running achievements has been setting the school record in the 3000-meter steeplechase at 11:26. She said, “I hope to better that time in the spring because it is my favorite event. Another highlight was breaking the 6000-meter cross country record. Two weeks later, I broke it again as did my teammate and roommate, who now holds it officially.”

Running didn’t come easy to start. Rebecca said, “My sister Allison and I played soccer, with me starting my freshman year at West Rowan when she began her senior year. The soccer coach wanted us to run cross country so that we would be in shape. We joined the team and started running…and we absolutely hated it. We would actually go run for 10 minutes and then hide until our run was supposed to be over. I walked in meets. I think my best time my freshman year was a 24:30 in the 5K at Dan Nicholas which included at least two walking breaks. Mono kept me from playing varsity soccer, but afterwards I wanted to join a club soccer team so I began running one to two times a day to get in shape. By the time August came around and I went to a cross country practice, I was keeping up with our best runner and not out of breath! When our first meet came, my parents didn’t even come because my sister had a home soccer game at Catawba. No one in the county knew who I was, and I didn’t know I won until they handed me the first place index card. My parents didn’t believe that I won until they saw the Salisbury Post the next day. That’s when I realized I might be good at running and fell in love with the sport.”

Rebecca said, “I am so glad I chose Georgia Southern. UNC Wilmington was another possibility, but they dropped cross country and track the next year. Looking back, I feel God guided me to Georgia Southern and it was all a part of His plan. Originally a nutrition major, I quickly changed to journalism after my first chemistry class. I love broadcast, going to class and my classmates. I never looked forward to going to school until I started taking journalism classes. Georgia Southern has one of the top journalism programs in the Southeast region, compared to schools such as Ole Miss and UGA. I know that when I leave here in the spring, I will be prepared for the   real world and that’s a good feeling.”

I asked Rebecca to describe her mix of training and academics. She said, “Training as a Division 1 athlete is probably one of the hardest things I have ever done. Monday through Friday, we have two practices a day unless we have a race that weekend, and then we only have one practice the two days before the race. We lift weights three days a week with a practice that afternoon. The other two days we have a morning run and another practice in the afternoon. On Saturdays, we have a long run which varies. My group runs for 90 minutes. Sundays are off completely. As for travel, we leave the day before competition, unless we fly. We travel in vans during cross country because we only take 5-10 girls to a race. We take charter buses during track season because we have more girls on that team. We stay in hotels and most of time have food catered to the hotel. Sometimes we are given per diem cash.”

Rebecca added, “There has been a great improvement in my time management and procrastination when it comes to school work. Two practices every day, traveling on the weekends and missing some classes make homework and due dates really hard to manage. I had to learn to plan things out and often turn in assignments earlier than other students because I would be on the road.”

Concerning future plans, Rebecca said, “After GSU, I hope to work at a Savannah news station as a sports reporter/anchor — or any job that’s open. I want to start swimming after college and compete in some triathlons if work allows. I will miss competing on a team but will always love running. I will continue for as long as my body allows because of the benefits for overall metabolic health, especially the heart, joints and muscles.”

Check out the upcoming Resolution Run 5K on Jan. 1 and other races at www.salisburyrowanrunners.org