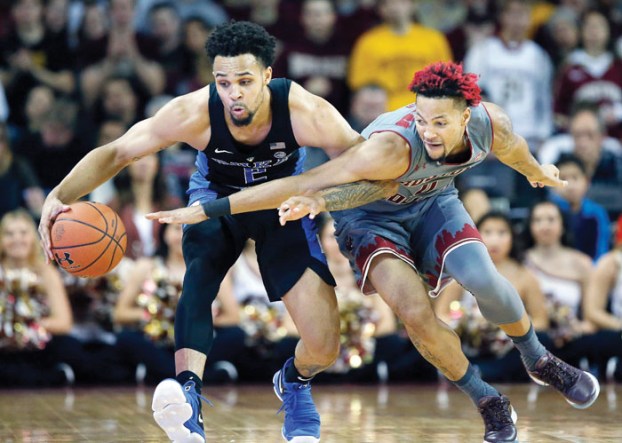 BOSTON (AP) — Outside the Boston College basketball office, on the way to the practice gym, the walls are decorated with giant pictures from the Eagles’ biggest wins.

Make room for an addition: Boston College 89, Duke 84, an upset that sent the No. 1 Blue Devils to their first loss.

“We’re putting one up for this one,” coach Jim Christian said. “That’s where I would put it. If you get a poster up on that wall, that’s a big thing because of the proud history of this place.”

“I think this is probably going to be one of the top ones,” Bowman said.

The Blue Devils erased a 10-point deficit in the second half and led 79-75 with 3:30 to play. Boston College scored 12 of the next 14 points, getting a pair of 3-pointers from Robinson. Duke’s Trevon Duvall drove to the basket to make it 83-81 with 31 seconds left, but then he was called for an intentional foul on Chatman as BC tried to dribble out the clock.

Chatman made both foul shots, and then with BC retaining possession he was fouled again and made two more. A 3-pointer by Trent made it 87-84, but then Jerome Robinson was sent to the line and hit his free throws with 6 seconds left to ice it.

“This isn’t about us being horrible. This is about how great they were. They were terrific. Not good, terrific,” Duke coach Mike Krzyzewski said. “We’ve got to get better. But I knew that. If we won, I would tell you we have to get better.”

Despite the first snowstorm of the winter in Boston, a full house of 8,606 filled the Conte Forum — the first sellout in Chestnut Hill since a game against ninth-ranked North Carolina last Jan. 21.

The fans poured onto the court after Trent’s mostly meaningless 3-pointer in the final seconds bounced off the rim, celebrating Christian’s biggest win yet. The Eagles finished last in the ACC in each of the past two seasons.

“I told these guys how fortunate they were because there’s a lot of guys playing college basketball who are in great programs that will never get a chance to play the No. 1 team in the nation at home,” Christian said. “For them, individually, (it’s a) lifetime memory and a great step for our program.”

Duke led 36-35 with four minutes left in the half before BC scored 13 of the next 16 points, getting back-to-back 3-pointers from Chatman and a fast-break layup from Bowman to open a nine-point lead with 23 seconds before the break. Two free throws cut it to 48-41 before Bowman’s 3 at the buzzer rimmed out.

“They made almost every shot that left their hands,” Bagley said. “It’s going to be like that some games.”

Chatman hit another 3 to open the second half and give BC its biggest lead. It was 53-43 when Grayson Allen and Bagley hit back-to-back 3-pointers during 15-5 run to tie it.

The Blue Devils have spent 134 weeks at No. 1 — tied with UCLA for the most in the history of the AP poll. A win on Saturday would certainly have broken the record.

“It’s something you’ve got to earn it every week,” Allen said. “We didn’t earn it this week.”

Boston College: The Eagles are 4-5 all-time against No. 1 teams in the AP poll. They also won their previous two, beating North Carolina in 2009 and Syracuse in 2014.

It was the 3,000th game for the Duke basketball program. Krzyzewski had been going for his 500th win away from Cameron Indoor Stadium, and his 400th regular-season ACC win. Duke had been 20-2 against BC all-time, and 16-1 in ACC play, with the other loss coming in Boston in 2009. Since then, the Blue Devils have beaten the Eagles 11 times in a row.

Allen sustained a bruise under his right eye late in the first half when he went to the floor taking a charge and teammate Javin DeLaurier landed on his face.

Allen missed seven of his first nine shots and finished with 14 points on 5-for-20 shooting, making one of nine 3-point shots.

Boston College played its first game without Deontae “Teddy” Hawkins, who injured his knee and is out for the rest of the season. A graduate transfer from Illinois State who attended the game on crutches, Hawkins had been BC’s top rebounder and third-leading scorer.