Three countries in 11 days: a whole lot to see and do 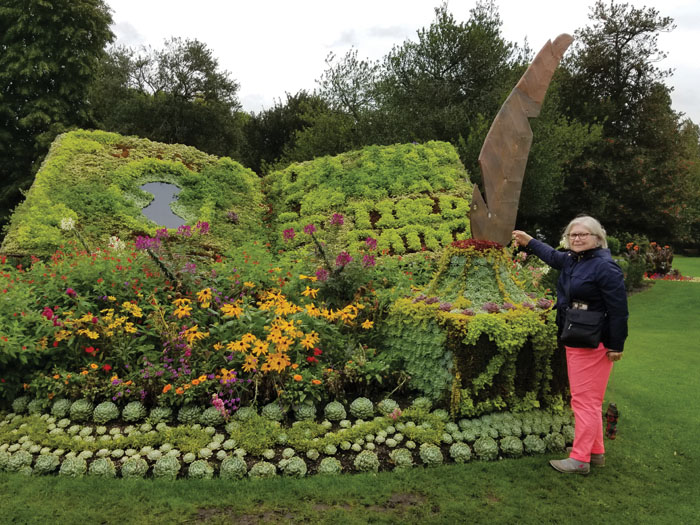 Gerrie Blackwelder beside the giant book created from a mixture of succulents and perennials, celebrating the 200th anniversary of the beloved author Jane Austen.

Within 10 minutes of landing from a trip to Ireland last year, the Rowan Travelers were contemplating their 2017 travel adventure.

After a couple of short meetings, the group unanimously decided to continue their travels this year to scenic areas of Great Britain. The tour itself was quite ambitious, covering three countries — England, Wales and Scotland — in just 11 days.

While we began with a brief tour of historic areas in London and Windsor, most of the tour was well away from big cities and focused on scenic landscapes and quaint villages of western Great Britain.

The ancient ruins of Stonehenge, the mysterious and haunting 30,000-year-old structure of standing stones and plinth rocks, as well as the majestic spires of the Salisbury Cathedral were also included in the scenic tour.

Many are unaware that Salisbury Cathedral, built in only 37 years in Salisbury, England, is the focal piece in Ken Follet’s novel, “Pillars of the Earth.” In Plymouth, we toured the home port where brave pilgrims embarked to the new world.

Onward near Land’s End, The Minack Theater provided breathtaking views of the most unusual outdoor theater in the world. Created in the 1930s by Rowena Cade, the picturesque theater was hand dug out of the side of a cliff facing the Atlantic Ocean. Enormous flat stones are carefully placed for arena-style seating. The Minack Theater, an open air theater constructed above a gully with a rocky granite outcrop jutting into the sea, has appeared in a listing of the world’s most spectacular theaters.

The view is so steep it was like climbing a ladder to reach the seats. This is also the location where the BBC drama “Poldark” is filmed. “Doc Martin” is also filmed nearby across the bay at Port Isaac.

For the next few days, the group continued its travels to the northern edge of England and Wales, observing the ancient Roman baths in the city of Bath. Celebrating the 200th anniversary of the famous writer Jane Austen, a giant book created of succulent plants was on display in a park in the center of town.

Traveling through the countryside, small villages on the English/Welsh border seem to have stood still in time for hundreds of years. A larger-than-life town crier in Shrewsbury entertained the group with the history and insights of this most beautiful city. This town is host to the greatest number of black and white post and beam buildings in the world dating from the 17th century, and these moveable homes remain a viable part of the city.

The Lake District, a uniquely picturesque area dotted with several lakes, included the beautiful village of Grasmere, home of William Wordsworth. Grasmere was nestled in a series of winding roads and streams providing a vacation area much like Blowing Rock.

The entire drive along the route from Windsor to Edinburgh was truly scenic. Most of the countryside was open pastures with occasional massive trees dotting the picturesque fields with sheep and cattle as a staple livestock along the route to our destination of Carden Park Spa outside Edinburgh, Scotland.

Unlike Ireland with rock walls lining the countryside, the British employed neatly shaped hedgerows as borders. Hawthorn, beech and other shrubs were mechanically shaped to form neat uniform boundaries between farms. These hedgerow borders have been in place for hundreds of years.

These borders are not merely barriers for farm animals, they are still ancestral land rights markers and are recognized by the British government as distinct boundary lines that cannot be altered. If homes are to be built on these lands, they must match the footprint of ancestral homes that were removed. No new building can be built on such marked properties.

Giant shade tree canopies arched over the narrow roadways; trucks and buses hollowed out a path through the trees along the routes, as billboards and signage was graciously absent.

The Edinburgh castle destination allowed the group a chance to experience a panoramic view of the city of Edinburgh from the castle grounds perched on a high rock formation.

Rowan Travelers also spent a half day on their own observing their choice of beautiful formal gardens, or marveling over the Queen’s Royal Yacht Britannica, anchored in the harbor. Other brave Travelers visited the engineering marvel of Falkirk Wheel, a rotating boat lock on the canals outside Edinburgh. Rowan Travelers had time on their own to visit the shops and restaurants in St. Andrews.

The Rowan Travelers enjoyed 11 days of constant travel starting early in the day and often lasting well into the evening. Our CIE tour guide, John Cunningham, commented during our departure that the biggest complaint from the trip would be not spending enough time at the villages. He was right. We could have spent most of the tour in one or two of Great Britain’s small villages, they were that remarkable.

This scenic tour of Great Britain was wonderful. Travel agent Debbie Faggart and CIE Tours were instrumental in providing spotless logistics and pertinent detailed information along with the airport shuttle provided by Salisbury Motor Company. The Rowan Travelers were, again, simply a pleasure as travel companions.