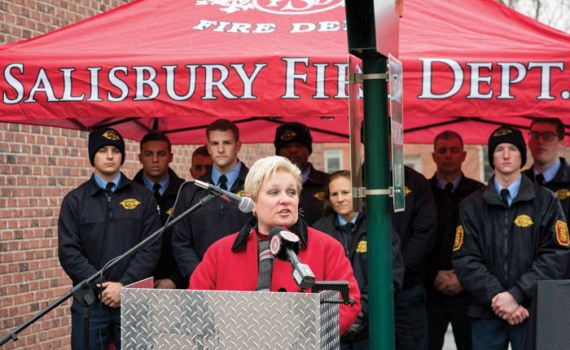 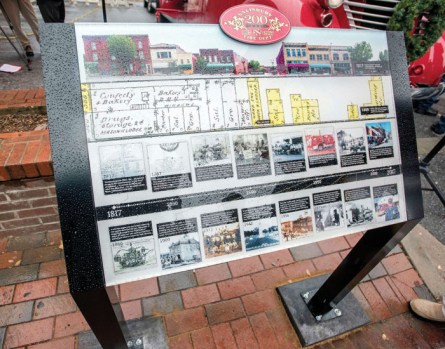 SALISBURY — It simply summed up two centuries of service.

That was on Misenheimer’s direct route, and the 1941 ladder truck proved to be first on the scene.

When the alarm sounds, you respond.

The call turned out to be overcooked food, and Misenheimer easily made it in time to the unveiling of a historical marker recognizing the Salisbury Fire Department’s 200-year history.

The 1941 truck also was the first piece of apparatus in Friday’s nighttime firetruck parade through downtown Salisbury. Again, nothing was going to deter the Fire Department from holding the parade, which was not deterred by Friday’s icy mix of winter precipitation.

The weather meant only a smattering of parade onlookers, but they were diehards.

“I hate everybody’s missing it,” said Sherry Stiltner, whose son, Lt. Brantley Shanks, was on Ladder Truck No. 11. “The show must go on.”

Stiltner took in the firetruck parade with Brantley’s wife, Katie, and his sister, Aubrie Stiltner. They were tightly bundled up for the night’s freezing temperatures.

Jamie Weaver and his 10-year-old son, Ethan, were leaving a karate class down the street when they noticed the parade.

“Exciting,” Jamie Weaver said. “I’ve never seen so many firetrucks in my life. We saw it going on and couldn’t resist.”

Weaver’s only regret was that his 2-year-old son couldn’t be there to take it in.

More than 50 units were originally penciled in to participate in the anniversary parade, but Friday’s weather reduced that number to a hearty 30.

Salisbury understandably featured its heavy hardware and had all manner of vehicles — 18 in all — from rescue engines and tankers, to ladder trucks and its haz-mat trailer.

Capt. John Cross died on duty at Station No. 2 in 1961. Joe Jenkins was lost in 1971, attempting a solo rescue during a house fire. In 2008, firefighters Vic Isler and Justin Monroe perished in the Salisbury Millwork fire.

Earlier Friday morning, the Fire Department unveiled a historical marker on the site of the city’s earliest documented fire station. Despite more rain and sleet, a good-size crowd attended the marker’s debut in the middle of the 100 block of East Innes Street.

It stands at the entrance to the public parking lot on the north side. Through an informative timeline, the marker highlights some of the history of the department. The 1941 aerial truck was used to lift the covering from the marker.

A map near the marker’s top shows where a fire station is known to have stood at this same spot in 1885 and 1890, according to insurance maps from those years. The town had a population of 3,800 in 1890 and a fire department that had a double-tank chemical engine, a hook and ladder truck, three hose reels and 1,000 feet of 2.5-inch hose.

Salisbury has one of the oldest documented fire departments in the state, going back to 1817.

To put it in perspective, Salisbury residents first came together to organize and purchase firefighting equipment just 44 years after the Boston Tea Party and 44 years before the start of the Civil War.

At the morning unveiling, City Council members Tamara Sheffield and Karen Alexander were on hand in a crowd dominated by firefighters past and present. Many of the current men and women wore their dress uniforms.

In 1948, Rowan County Register of Deeds William D. Kizziah presented to the Fire Department a registered copy of the department’s originating document from 1817, when 32 residents pledged a total of $415 to purchase an engine and other equipment for the city’s fire protection.

That document is on display at the Central Fire Station on East Innes Street.

Parnell said it is likely that wherever that 1817 pledge meeting was held and recorded, it was somewhere within 1,000 feet of where the historical marker was unveiled, given the size of Salisbury at the time.

Even before 1817, some rudimentary efforts were made in Salisbury to protect life and property against fire.

In 1770, the General Assembly of the Province of North Carolina passed an act saying that every “householder” of Salisbury was required to have on his premises a ladder and leather bucket of not less than 2 gallons capacity.

According to a Fire Department history, “household standings were established by how many buckets homeowners were required to have on hand.” In 1770, there was one four-bucket home, one three-bucket home and 20 two-bucket homes in Salisbury.

By 1793, the town passed an ordinance making it unlawful to store hay, oats, straw or fodder in dwellings because of the fire hazard. The population of Salisbury then was 400.

After Friday night’s parade, participants were invited to Station 5 on South Main Street or coffee, hot chocolate, birthday cake and some presentations.

During the parade, Blake Misenheimer — Rodney’s son — stood near the Square taking picture of the parade and especially the 1941 aerial truck that his father was driving and had played such a big role in restoring.

“This is kind of a moment for it,” Blake Misenheimer said.