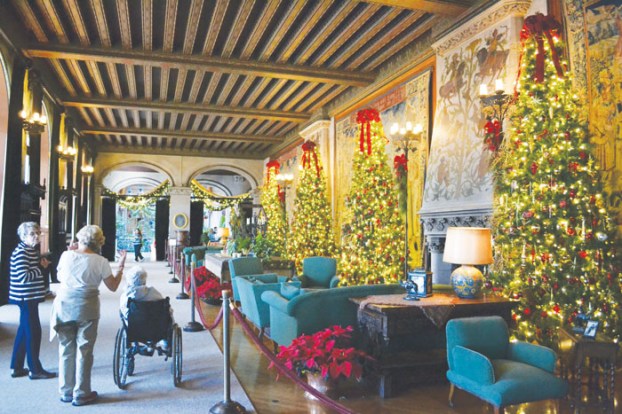 Barbara Smith, Kaye Leonard, and Cindy Rentz take in the opulence of the Biltmore House during a tour by a group from Trinity Oaks

Trinity Oaks seniors take in the wonders of Biltmore House

Given that, you’d think maybe the staff would take a little breather.

But Trinity Oaks doesn’t like to rest on its laurels. Since receiving the award, the staff has taken residents on a trip to the beach and, most recently, an outing to tour Biltmore House in Asheville.

I was lucky enough to be able to participate in the Nov. 29 day trip to tour the 250-room French Renaissance chateau — the summer residence for the Vanderbilts that was completed in 1895 and first opened to the public in 1930.

It was billed as a mystery trip, so the 14 residents who signed up didn’t know what was in store — which is pretty adventurous if you’re 96 or 97 years old, as two of the participants were. It’s possible that a few beans may have been spilled beforehand, but that didn’t ruin any of the fun.

Organizers must consider plenty of things before tackling such an outing with people who have limited mobility and health concerns. The Trinity Oaks staff handles the details, making sure they have everything that might be needed, from wheelchairs to extra oxygen to blankets to medications. The staff has to make sure that for every person in a wheelchair, there is a staff member or volunteer with whom they can buddy up.

The logistics are daunting, to say the least, especially for a group requiring 12 wheelchairs.

Dick Snell and his wife, Wanda, were among several Trinity Oaks cottage residents who volunteered to help with the trip. Like me, they were impressed by how the participants were cared for during the trip.

“It was an eye opener for us,” said Snell, who helped Doris Thomas navigate the sprawling mansion in her wheelchair.

For Bill Johnson, who heads the Trinity Oaks campus, organizing trips is a joy because they give residents a sense of normalcy, he says. They’re also loads of fun. Residents, staff members and volunteers have the chance to bond and develop a sense of camaraderie outside the walls of Trinity Oaks.

After we made it to the sprawling Biltmore estate, we enjoyed an elegant Southern-style lunch buffet at Deerpark Restaurant. Staff members and volunteers went through the buffet line for residents, assembling plates of turkey, stuffing, buttermilk mashed potatoes, collard greens with smoked ham hocks, and gravy.

My new friend Lottie Rowe, who sat beside me on the van, asked me to get her “a little bit of everything.” She is a woman after my own heart.

There was talk of napping after such a glorious meal, but it was time to experience the grandeur and opulence of Biltmore House. After pulling up in front of the mansion, it was time for wheelchair wrangling. After a quick group photo, it was time to enter the house.

A Biltmore employee said our contingent was the biggest single group of folks in wheelchairs he’d seen pass through.

A few hours of touring the home and it was time to load the vans again. Amazingly, not one person in our group of 35 needed to stop on the ride home.

“That was a wonderful day,” said Lottie. Like me, she was tired but glad for the experience. She’d been to the Biltmore before and was thrilled she had the chance to see it again.

And the next day? Was there rest for the happy but weary?

No, there was more fun on the agenda. Health and rehab residents enjoyed a bonfire and a band. Bill Johnson was back at it, roasting marshmallows for s’mores.

Katie Scarvey is a communications specialist for Lutheran Services Carolinas.