Heisman Trophy to be awarded tonight in NYC 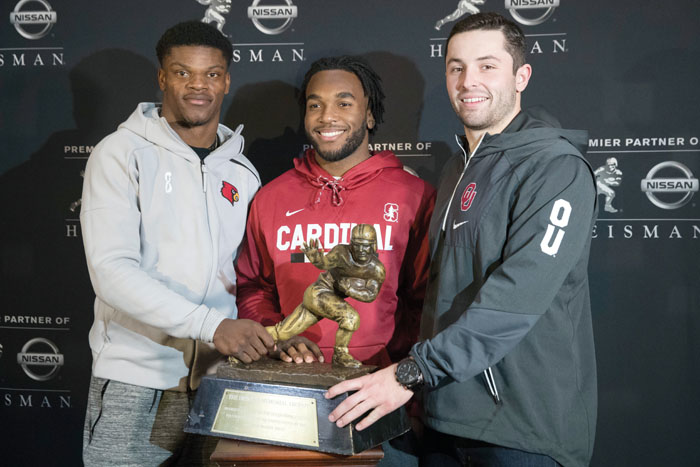 NEW YORK (AP) — Lamar Jackson gets asked to do the Heisman Trophy pose a lot.

No matter where he goes, even in bustling and crowded Times Square, he gets recognized often. No sooner was Jackson done talking about the fame that has come from winning the Heisman last season did a couple of young fans stop him in a Manhattan hotel to get a selfie with Louisville’s star quarterback.

Jackson leaned in with a big smile.

Just like last year, Jackson is a Heisman Trophy finalist. Unlike last year, Jackson is not expected to win. Oklahoma quarterback Baker Mayfield is the favorite to take home the trophy on Saturday night.  On Friday, Jackson, Mayfield and Stanford running back Bryce Love arrived in the Big Apple on the tail end of a busy week of bouncing around the country. The three finalists met with reporters, posed with the big bronze statue they are each hoping to win and then headed back out into the cold toward the subway for a trip to Wall Street.

The Heisman experience and first trip to New York blew away Jackson last year. Winning the trophy changed his life. Now, he is just enjoying the ride.

“This year I’ve been here before so it’s kind of like chill,” Jackson said.

Archie Griffin of Ohio State is the only player to win the Heisman Trophy twice. He did in 1974 and ‘75. Since then, eight winners have returned to try to win it again. Six of those have been since 2005. The best any returning Heisman winner has placed in the voting was second. Oklahoma running back Billy Sims was the runner-up to Southern California’s Charles White in 1979.

“It wasn’t tough for me because I was surprised I won it the first time,” Sims said.

Tim Tebow of Florida finished third in the 2008 voting, but by point total was the closet to winning a second Heisman. He received the most first-place votes that year and was 151 points behind winner Sam Bradford of Oklahoma. Texas quarterback Colt McCoy finished second.

Jackson probably won’t join Griffin’s exclusive club, but his numbers suggest he has been even better this season than last. He is averaging 411 total yards per game, up from 393 last year. He has been a more accurate passer, completing 60.4 percent after hitting 56.2 last season.

The difference? Last season, Jackson and the Cardinals had a signature victory against Florida State and they lost a thriller at Clemson. Not until a late November swoon did Louisville fall out of the playoff race in 2016. This season, the Cardinals lost three games by midseason. Jackson was playing well, but many just saw the final results and held it against him.

“It’s going to always be on you,” Jackson said. “No matter what goes on in the game it’s your fault.”

Still, the numbers were impossible to ignore and this November, as other Heisman contenders such as Saquon Barkley of Penn State and Josh Adams of Notre Dame started to fade, Jackson’s candidacy gained momentum.

“You see the highlight plays here and there,” Love said. “He’s been doing it for two years now. It’s just amazing to see.”

Jackson won the Heisman as a sophomore last year, the youngest winner ever at 19 years and 338 days.

“I’d say it was surreal,” Jackson said of the week or so that followed his victory. He felt like a kid being thrown head first into an adult world he was not quite ready to handle.

“But I still got to go back to college,” Jackson said. “It was crazy.”

Jackson said he really didn’t have much in the way of advice for Mayfield: “I don’t know. Just try not to cry.” Last year, Jackson wrote down some notes to use for a speech, but that went out the window as soon as he got on stage.

Jackson said he loves being back in New York. He gets a kick out of the traffic, the skyscrapers and the crowded streets.

“It’s an adventure here,” he said.

As a winner, Jackson gets a Heisman vote. All he would say is that he voted for all the finalists.

Conventional wisdom is that Jackson will declare for the NFL draft after this season, but he said that decision will come after Louisville’s bowl game against Mississippi State on Dec. 30.

Even if he doesn’t win another Heisman, and no matter how things work out in the pros, Jackson has sealed his place in college football history.

“It’s cool. I’m with some of the greats,” he said. “It’s good to be recognized as a Heisman winner.”