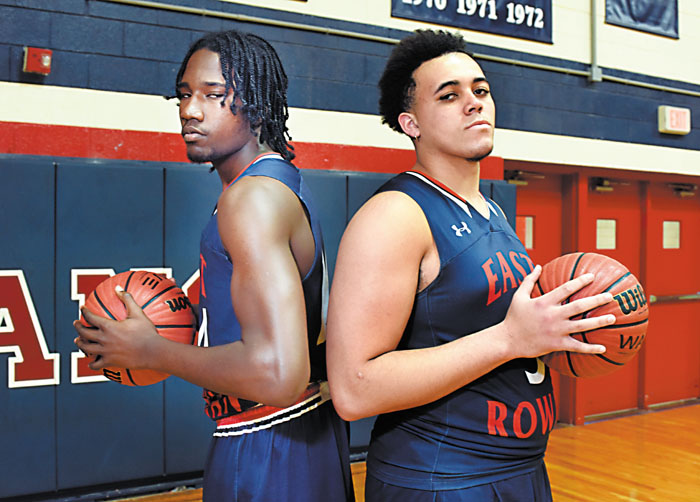 Mustangs at a Glance:

GRANITE QUARRY – With good size, a lot more depth, and a new conference to compete in, East Rowan boys’ coach Kurt Misenheimer has good reason to be optimistic about the new basketball season.

“We have a lot of athletes and a lots of good players,” Misenheimer says, “so we are ready to make some noise and compete. Our biggest challenge is to play collectively and play as a unit.”

Entering his third season as head coach, Misenheimer says it is a process to build a solid program after struggling through a 4-20 campaign last season. “For the past two seasons, for various reasons, we had a lot of guys who were new and had never played together,” he said. “but this year, we have the majority of our team who have played a season together — plus a summer of playing together. They just have a better feel for each other as a team.”

Misenheimer is also pleased that interest in program is at a high level, with 60 players trying out for basketball this year. The Mustangs are going with a solid 14 on varsity and another 14 on the jayvee team.

Last year, East had one of its biggest team in many years and this season, they are even bigger. Back to anchor the inside are 6-7 junior C/F Elton Hooper (9.6 ppg.) and 6-5, 250 lb. sophomore Brandon Jefferson (7.4 ppg and top rebounder). Add in 6-3 forward Trevor Scruggs and 6-3 point guard Gabe Hinceman, and it is understandable that East will look to play inside out for the most part.

“You can say you want to run and gun all day,” Misenheimer says, “But when you have the kind of bigs like we do, you play to your strength.”

Misenheimer especially likes the skills Jefferson brings to the team in his second varsity season. “He is such a big guy and can use his body well,” said Misenheimer, “but he is also one of our best ball handlers on the team and could play any position if needed. He will create a lot of mismatches with his size and ball handling.”

Out on the perimeter with Hinceman will be 5-10 senior Bryson Sprinkle, a star on the East championship golf team, who hits free throws and jumpers like he sinks 20 foot putts. Another key member of the 8-man rotation is 6-0 junior forward Christian Bennett, who has rim-grabbing leaping ability. In the “new guy” category is freshman David Jordan, a 6-1 guard, who will be a key part of the rotation this season. “He has a wide skill set you don’t see out of many freshmen,” Misenheimer says of Jordan. “He has great footwork and a high basketball IQ. Jordan is not just going to be on our team, he is going to be playing for our team for a few years to come.”

East departs the rugged and talented South Piedmont conference to play in the newly formed six-team North Piedmont Conference this season after realignment. “We know West and Carson, of course, but I don’t know a lot about Statesville, South Iredell and North Iredell yet,” Misenheimer says. “But I am sure it will be a strong league. We want to play hard and smart to compete in the new league.”

Misenheimer will be assisted again this season by coaches John Cherry and Darren Cozart. Former varsity head coach Trey Ledbetter is back on the court as head coach of the junior varsity boys.

The season so far: The Mustangs experienced some frustration and heartbreak to open the new season. East lost a 10-point lead in the fourth quarter against Central Davidson to fall, 64-56, in the opener. Then a half-court miracle shot by Central Cabarrus guard Adam Roller stunned East, 67-66. The Mustangs lost a defensive struggle at Northwest Cabarrus, 42-35, but put it all together at home to thump a strong Mt. Pleasant team, 56-38. Jefferson posted 15 points and 10 rebounds while Sprinkle also had 15 points, including 9 of 10 from the foul line. The Mustangs then scored an impressive victory earlier this week at A.L. Brown, 54-39. Hooper led the way against the Wonders with 19 points.

Brandon Jefferson: 6-5 Soph. F-C – at 250 pounds, looks and plays a lot wiser than his age and experience might indicate.  Jefferson is the team’s second leading returning scorer and rebounder and already has a double-double this season.

Elton Hooper: 6-7 Jr., F-C – Playing in just 16 games last season, Hooper led the team with a 9.5 point average and scored in double figures eight times. With his size and seven foot wing span, he can alter shots,  block shots, and finish in the paint.

Gabe Hinceman: 6-3, Jr., PG – With his size and basketball IQ, Hinceman has established himself as the East point guard this season. He is versatile enough that he can play down low as well.