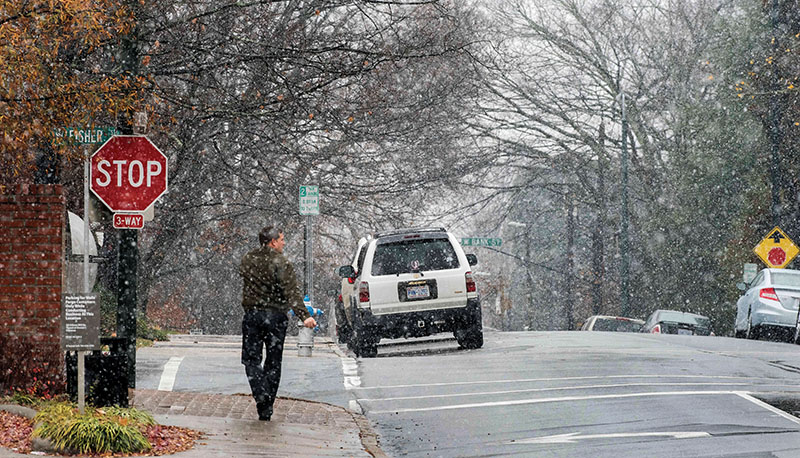 SALISBURY — The season’s first bit of snow put N.C. Department of Transportation crews into action Friday, and they probably ended up having more work than expected.

After a morning mix of sleet and rain, snowfall began in Salisbury about 1 p.m. Friday, and various periods of snow, sleet and rain persisted throughout the day and night.

First responders and law enforcement officers in Rowan County were hit with a flurry of vehicle accidents in the late afternoon and early evening hours.

Forecasters said precipitation could continue through late this morning. Temperature were expected to climb toward 40 degrees later in the day.

By 4 p.m Friday, roads in the western part of the county were getting snowy and dangerous. Roads were especially icy in the Mooresville area, which saw more snow than Rowan County.

Accumulations looked to be heavier the farther west you were from Rowan County.

Steve Monday, forecaster for Rowan County Weather, said the storm would lead to trace accumulations of up to 2 inches on surfaces other than roads.

“I checked the road temperature early this morning,” Hedrick said Friday. “It was in the mid- to upper 40s.”

Precipitation was expected to be mainly snow by Friday evening, Monday said.

DOT crews remained on call throughout the night and early morning. Trucks were ready to go with salt spreaders and plows.

Hedrick said the local DOT is waiting to see how forecasts pan out in the Rowan-Salisbury area.

North Carolina is one of the northernmost areas affected by Winter Storm Benji.

Benji began early Friday morning with snow as far south as Brownsville, Texas. Corpus Christi, Texas, saw an accumulation of up to 4 inches of snow on elevated surfaces.

Hedrick said his crews were waiting by the phone to address problem areas as local law enforcement officials identified them.