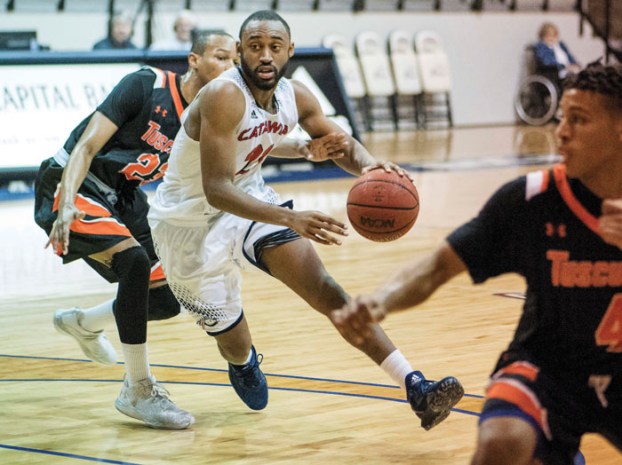 CHINA GROVE — A month ago, when Catawba’s men’s basketball season was getting started, the team’s new home uniforms were still in Japan.

But that wasn’t a problem.  The uniforms had plenty of time to arrive. Catawba’s home opener wasn’t scheduled until today, Dec. 9.

The Indians (2-4, 0-2 SAC) were supposed to play their first seven games away from Goodman Gym (five true road games, two games at neutral sites), but one of those neutral-site games wasn’t played due to the tragic death of Montevallo’s A.J. Luke, who died of an enlarged heart. Catawba had been scheduled to play Montevallo in Albany, Ga., on the Saturday that Luke’s body was discovered in his hotel room.

“That was a tough thing to deal with for all of us,” Catawba coach Rob Perron said. “We gathered the team, we talked about it, we prayed together, and then we came home.”

Catawba’s slow start — the Indians’ two wins came against Albany State and Winston-Salem State — isn’t what Perron wanted, but it’s not indicative of how good the team might be.  The Indians have had no luck at all.

“We’re not using the injuries as a crutch, it’s just reality,”  Perron said. “Taylor and Morrison are seniors, two All-SAC guys. And we’ve had other guys out as well. We’ve had to put a lot of freshmen in difficult situations before they were prepared, before they were trained to be in those situations.”

Two junior college recruits that Perron viewed as potential starters — 6-foot-6 Daquan Lilly and 6-4 Larry Curry — are on the shelf. They are expected to miss the entire season. Lilly underwent back surgery, while Curry has a serious ankle injury.

On top of all the health misfortune, Catawba’s early schedule was brutal. It was going to be difficult to break even in those early games, even if everyone had stayed in one piece.

Perron pointed out that the four teams the Indians have lost to are a combined 25-1. Francis Marion is 5-0. UNC Pembroke (5-1) is ranked 20th in Division II. Fourth-ranked Lincoln Memorial and second-ranked Queens are the teams to beat in the SAC and already are a combined 15-0.

That’s why no one has panicked. Catawba is 0-2 in the league, but the two least winnable SAC games — at Queens and at Lincoln Memorial — are in the rearview mirror.

“I really think our guys have handled the adversity well,” Perron said. “They realize we’ve got to do everything better — shoot the 3 better, defend better, rebound better, stay out of foul trouble better. But with all the crap that’s happened, there hasn’t been any griping. We’ve kept playing, and we’re going to get healthier.”

The return to health has begun. Taylor and Morrison practiced Wednesday, not full tilt, but they were able to participate, and that was encouraging. The high-flying Morrison was the SAC Player of the Week after he scored 38 points in the win at Winston-Salem State. He’s averaged 23 points and 7.4 rebounds in the five games in which he’s played.

Taylor, a rock of steadiness when he’s on the floor, scored 16 points in his only outing.

“Those two were around 70 percent Wednesday, something like that,” Perron said. “But those two at 70 percent is still going to be better than a lot of guys at 100.”

Malik Constantine, who has battled injuries in the past, is potentially a third star for the Indians. A 6-6 sophomore, he has a fluid inside/out game. He’s averaging 15 points and 6.8 boards.

The other experienced returner for the Indians is 6-7 junior Jeremy McLaughlin.  McLaughin isn’t usually a big scorer, but he provides steady rebounding and interior defense.

“Rebounding should be a strength for us,” Perron said. “We’ve got four guys (Taylor, Morrison, McLaughlin and Constantine) who could be in the top 10 in rebounding in the SAC.”

Barber was off to a good start defensively, but he hurt an ankle and is going to be out about two weeks. Pappas has strong offensive skills and led the Indians in scoring at Lincoln Memorial. Robinson is an athletic guy with some size (6-4).

Also back are guards Greg Childress and Matt Edwards.

Cannon is a highly regarded player who has been slowed by injury. He’s played some in the last two games.

Lentz, a North Rowan product, started the game at Lincoln Memorial. He’s shot only 2-for-10 on 3-pointers, but Perron has a lot of confidence in him.

“Henderson is really practicing well, so he’s going to start making shots,” Perron said. “He missed a big shot late in our 72-70 loss to Francis Marion, but he showed a lot  by having the willingness to take that shot in his first college game.”

Tusculum comes to Goodman Gym today (4 p.m.) with a 2-6 overall record and an 0-2 SAC mark. So the Indians really need to win today if they’re going to get things going in the right direction.

“We’re like that tennis player who’s serving,” Perron said. “You have to win your serve. We have to defend our home court.”