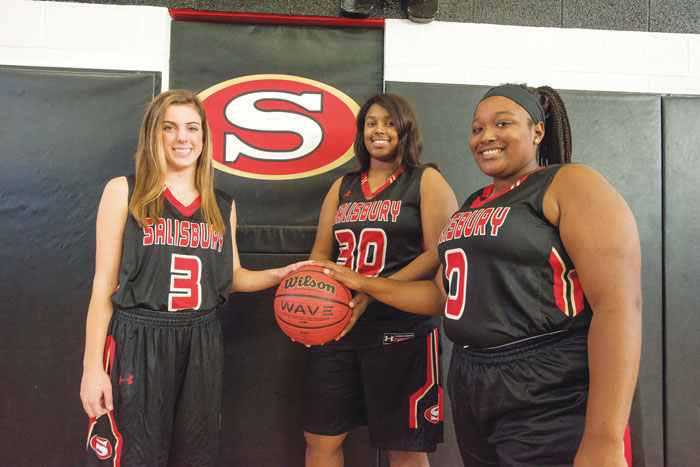 The Hornets were 21-3 a year ago, including a perfect 10-0 mark in the Central Carolina Conference. Salisbury lost its opener and then won 19 consecutive games before falling to East Davidson in the CCC Tournament. The Hornets won a playoff game by 27 points over Gastonia Huss, before Madison ended their season in the second round.

“This feels like the same team, just different faces, as far as the roles go,” said Brice. “We can do the same things that we could do last year with Alexander and Phifer, but now we have new people in those spots like Tacorra Robinson, who doesn’t play guard but plays hard, like Tyzarea, and Jinika Glenn has the athleticism that Mystjkal had.

“As the season progresses, we’ll get better each game, as the girls learn to play with one another,” continued Brice, now in her fifth season. “We’ll get our chemistry down. We do have experienced players in Capito, Troutman and Fulson … and they’ve played well together for two and three years — and that’s a good thing.”

The 6-1 Troutman, now a junior who scored 728 points during her first two seasons, averaged 15.8 points per game last year. But that average should rise as her game expands. Troutman is averaging 18.8 through four games this season, all Salisbury wins. She had a triple-double recently against Central Davidson (22 points, 15 rebounds, 10 steals).

“Bry had a good summer in AAU and I’m asking her to do more this year, including handling the ball more and playing on the perimeter,” said Brice. “She can knock down outside shots when open. She’s not just an inside player any more. She’s going to be key to the success of our team this year because of that inside and out game, her versatility, and her maturity.

“Bry now understands the importance of being a leader of a team,” continued Brice. “She knows that we need her points, but that we also need her teammates involved as much as possible. She wants to make her teammates better and understands how that makes us a better team in the long run. Maturity is her biggest improvement over last year. She is playing under control now, more than ever.”

Fulson, the sophomore point guard who made a big splash last year as a freshman, will also be key. She averaged 12.6 points per game last year, but has already had a 26-point game this season against West Davidson. But in addition to scoring, Fulson is the quarterback, with her ball-handling and distribution skills.

Capito, a senior guard and the Hornets’ main 3-point shooter, entered her final season with 693 points. She averaged 11.2 last year and opened this season with a 21-point effort against Thomasville.

Robinson, a 5-8 junior forward, missed all of her sophomore year due to a knee injury. She averaged five points per game as a freshman in 2015-16. She’ll bring additional rebounding to the table.

“Jinika can really guard people … her defense is strong,” said Brice, who also added that Glenn and sophomore Jalieha Oats may alternate starting, depending upon the opponent.

Lexi May, a 5-8 junior who transferred into Salisbury from out of state, is a post player who can also be an outside threat, according to Brice.

Also returning are two seniors, Kayla Caldwell and Ke’shaia Daniels. Caldwell is a guard while Daniels is a 5-8 post player.

One big difference for Salisbury this year will be the expanded CCC. South Rowan, Ledford, North Davidson, Central Davidson and new school Oak Grove have made it a 10-team league.

Salisbury looks to go to 5-0 tonight against winless Oak Grove, but looking down the road, Ledford and South Rowan will provide challenges for the Hornets, along with East Davidson.

“It is taking a little longer than I thought for everyone to get comfortable in their roles and adjusting for the type of game we want to play, but each game, we have shown improvement,” added Brice. “It’s good to play games that are challenging. Dealing with adversity and finding ways to win is how you grow as a team.”