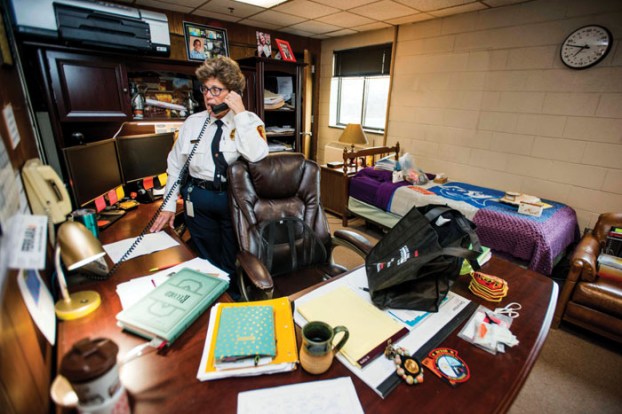 Chris Kepley takes a call while cleaning out her personal belongings in the battalion chief's office she shares with two other chiefs. Salisbury Fire Department's first woman firefighter is set to retire from her career after 30 years of service. Jon C. Lakey/Salisbury Post

Kepley, a Wallburg native, came to Salisbury to attend Catawba College, where she received degrees in business and biology with a minor in chemistry. She intended to go into the forestry service but needed a job. She had been working a second-shift job at Frito-Lay when she saw a posting in the newspaper for a fire control specialist with the Fire Department and applied.

She remembers that the newspaper ad had very little to describe the fire service job, but she applied anyway.

“I was young. I took a job in sales. I was terrible at it,” she said of the chip company.

Most important, she wanted a first-shift job.

She applied for a number of other jobs and prayed that she’d hear from the one that was meant for her. She placed her prayer request on the altar at a church meeting; the next day, she heard from the Fire Department.

Kepley would go on to become the department’s first woman battalion chief in 2006, leading 23 firefighters. She’s also currently the Fire Department chaplain and has previously served as its public information officer. She began as a fire control specialist, became an engineer in 1996 and was appointed captain in the late 1990s.

In addition to her business and biology degrees, Kepley has two associate degrees in fire science and emergency medical science technology.

Her hiring wasn’t a big deal for Kepley, but it certainly was for the community. On her first day, a news conference was held to introduce her. Reporters were invited to the fire station to meet Kepley and observe some of her fire skills.

“They were there watching me do training,” she said.

She did ladder and hose work, but thankfully didn’t respond to a single call. She recalls not knowing much and praying that she wouldn’t have to go on a call that first day.

Kepley laughs remembering fondly that she didn’t have any skills to start. All her knowledge of firefighting has been learned on the job. It wasn’t until six months later that there was even a formal training school, known colloquially as rookie school.

She’s been a firefighter at Ellis Cross Country since 2005 and before that, she was a volunteer with the Cleveland Volunteer Fire Department.

Kepley said in a 1989 Post article she knew she lacked the upper-body strength of her male counterparts but found ways to compensate.

“It doesn’t matter how you do it as long as it gets done,” Kepley told a Post reporter.

Unlike the uniforms and shoes that are worn today, at the time Kepley’s black fire shoes were purchased from Roses.

There were no electronic records for each call. Everyday firefighters would write incident reports in a call log, which is still done today. Although electronic records are kept, the Fire Department still maintains paper logs as well.

When Kepley began, the 911 call center was at Station No. 1.

“Everyone in Rowan County would call here,” she said.

Each shift, a firefighter would answer and dispatch calls. A formal 911 designation wasn’t implemented until the late 1980s.

Kepley started at Station 1 then moved to Station 2 on South Main Street and later Station 3 on West Innes Street.

The West Innes Street station is her favorite, she said, because it’s in a mixed community. There’s a lot of interaction in the neighborhood, it’s close to her alma mater — Catawba College, as well as Livingstone College — and it has a number of restaurants and nursing homes.

Over the years, other things have changed including allowing firefighters to ride on the tailboard. State law prevents firefighters from hanging onto the back of the truck for safety reasons, but Kepley recalls gripping the back of a truck.

When Kepley joined the Fire Department, current Chief Bob Parnell was a battalion chief. He recalls the first time she walked up to the station.

“She was one of the first females in the fire service in our region. She had a bit of a trail to carve that others haven’t carved yet,” Parnell said.

He said early on officials knew Kepley had grit, determination and a professional attitude. There was no doubt that she would make it in the fire service.

Parnell said she has compassion for people and has used that as a strength in her career.

What if Chris Kepley had never joined the Salisbury Fire Department? Parnell said it would have missed a huge lesson in care and compassion.

“She was a role model in regards to serving the community. She didn’t waver from her dedication to making sure that the citizens were first in our list of priorities,” Parnell said.

Kepley said she hopes she’s prepared the firefighters and helped them get ready for the next step in their careers.

“What I’ve tried to do is to leave the place better than I found it,” Kepley said. “It has been a great career.”

Kepley, who is a volunteer with Communities in Schools and the Rowan County Literacy Council, will continue working with those organizations. She’ll miss the interaction with other firefighters the most, but she’ll fill in as a battalion chief with the Fire Department as well as keep her volunteer position as training captain at Ellis Cross Country Fire Department on Old Mocksville Road.

She won’t miss losing sleep. Although firefighters sleep in their quarters at the station, Kepley said she’s never been able to get sound sleep while working. She’s always listened out for the alarm. If she didn’t go to a call with other firefighters, she never slept until all the guys were back in the station.

Kepley said she could have retired in September but wanted to stick around a few more months for the 200th anniversary of the founding of the Fire Department. She’ll complete her last full shift today.

“It’s a milestone year. The Fire Department was here 175 years before I got here. It will be here after I leave,” she said.

Salisbury’s department is one of the oldest documented North Carolina fire departments. It’s all-year celebration will culminate with a nighttime firetruck parade beginning at 7 p.m. today.

The parade will travel along Main Street from Kerr to Monroe streets and end at Fire Station No. 5 next to Chestnut Hill Cemetery. A plaque will be dedicated at 10 a.m. today at 112 E. Innes St., beside K-Dee’s Jewelers.

SALISBURY — Minutes after electing a new mayor Tuesday night, the new Salisbury City Council was presented with one of... read more