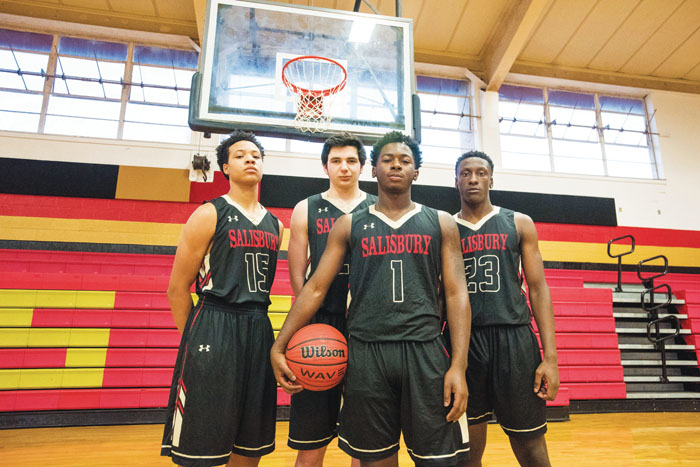 SALISBURY — Bryan Withers, boys basketball coach at Salisbury High, was fired up on photo day a few weeks ago. Now four games into the season, it’s easy to see why.

The Hornets are off to a 4-0 start, all Central Carolina Conference games, having beaten Thomasville, West Davidson, Lexington and Central Davidson.

Withers has no problem acknowledging that the Hornets’ “go-to guy” is senior guard Trell Baker, a blur on the court who has also developed into a good shooter. But it’s one of his “bigs” that also has Withers’ eyes lighting up.

“Of course, Trell Baker is going to be our No. 1 guy, but we have a lot of guys who can pick it up,” said Withers. “And I think Bill Fisher is going to surprise people with his improvement over last year … his athleticism will change some people’s minds about him and thus, our team.”

Baker has 78 points in the first four games (19.5 avg.), including 25 against Thomasville in the opener. Fisher, a 6-5 junior post player, had a 25-point game against Lexington and is averaging 15.3.

That’s right, just six players returning from a squad that went 15-8 last season. The Hornets finished third in the CCC at 7-3. There will be more conference games this year, as the league has grown to 10 schools with the addition of South Rowan, North Davidson, Ledford, Central Davidson and Oak Grove (North Rowan has moved to the 1A Yadkin Valley Conference).

“I think we’ll surprise a lot of people with the talent that we have,” said Withers. “There’s a lot of newcomers to the program and we had a good core of juniors and seniors coming back. We’re really heavy with guards, but we can play the style that I love now — and that’s what I’ve been waiting on — play a lot of people and run them in and out of the lineup.”

Canon is a transfer, and a “very athletic” 6-3 player that Withers is excited about.

“Oshaun will be key for us, as well as Gill and Moss,” continued Withers. “So, we have a lot of good guards and we have some guards that we’re not talking about yet, like Sloan (who is from Texas).”

Robinson is averaging 14 points per game thus far this season.

Withers, who also was part of a 10-school conference when he coached at South Rowan, welcomes the challenge of the increased number of league contests.

“There’s a lot of games, but I like that,” said Withers. “I’m used to that from my days at South Rowan. I can’t wait. The guys are ready and I’m ready. You’ve got to bring it every night.”

Baker is the only starter returning for Salisbury. The other four starters from last year — Zadrian Harris, Tre Oats, Will Leckonby and Shaleek Williams — have graduated.

Harris and Oats provided inside punch and Leckonby was a 3-point shooter.

“We have different people who can shoot,” said Withers. “Last year, we relied on one guy to shoot the 3-ball (Leckonby), but this year, four or five different guys can make the shot for us.

“We use a lot of players and we love a high-scoring game, but I think we’ll be much better defensively than we have been,” continued Withers. “Outside shots won’t be our game so much. We can knock them down, but if we utilize what we have, we can get into the paint and make things happen.”

NOTE: Kesler has an injury and will not be available until Christmas. He is the son of PeeWee Kesler and nephew of Jimmy Kesler, both former North Rowan standouts. “When Xavier gets back, he’ll play big minutes for us,” said Withers.