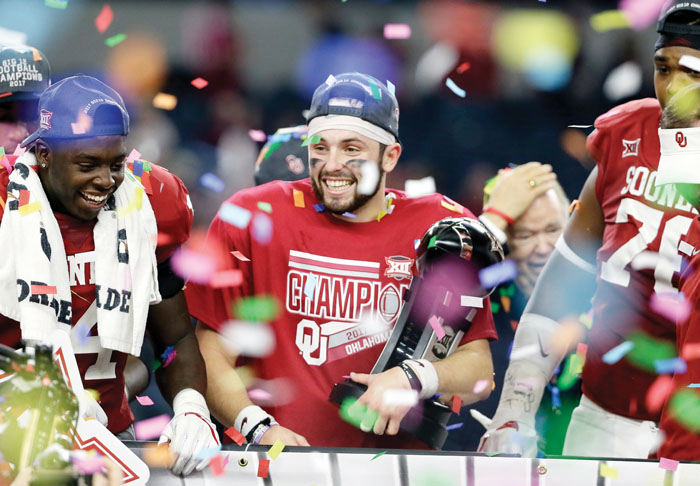 FILE - In this Dec. 2, 2017, file photo, Oklahoma quarterback Baker Mayfield, center, holds his Most Outstanding Player trophy as he celebrates with the team after their 41-17 win in the the Big 12 Conference championship NCAA college football game against TCU, in Arlington, Texas. Baker Mayfield is the AP player of the year, becoming the fourth Oklahoma quarterback to win the award since it was established in 1998. (AP Photo/Tony Gutierrez, File)

NEW YORK (AP) — Baker Mayfield is The Associated Press college football Player of the Year, becoming the fourth Oklahoma quarterback to win the award since it was established in 1998.

Mayfield, Love and Jackson are also the finalists for the Heisman, which will be handed out Saturday night in New York.

Mayfield is a former walk-on who has led the No. 2 Sooners to the College Football Playoff, where they will play No. 3 Georgia in the Rose Bowl on Jan. 1. Mayfield leads the nation in passer efficiency rating and has thrown for 4,340 yards and 41 touchdowns.

He joins Josh Heupel (2000), Jason White (2003) and Sam Bradford (2008) as previous winners from Oklahoma. No other school has had more than two players win AP Player of the Year.

“I’m on this awards trip right now with a lot of great players from OU and other schools, and every one of them deserves to be recognized. To receive this award is an honor and it’s something just a few years ago I never thought would happen,” Mayfield said. “Obviously, I’m very happy and thankful that I’m being recognized with this.”

Mayfield played high school football in Austin, Texas, but did not receive a scholarship offer from the Longhorns. He was at Texas Tech, and played as a freshman, but ended up transferring to Oklahoma. With the Sooners, he has become a three-year starter and one of the most productive passers in college football history.

Mayfield also won the Walter Camp and Maxwell Award as player of the year as well as the Davey O’Brien Award as the top quarterback. Those three awards were presented to him Thursday night at ESPN’s college football awards show in Atlanta.

Other winners at the awards show:

Alabama strong safety Minkah Fitzpatrick won the Bednarik as the nation’s top defensive player. Also the winner of the Jim Thorpe Award as the top defensive back, he followed up his All-America season in 2016 with 52 tackles, seven pass breakups, three quarterback hurries, an interception, a forced fumble and blocked field goal.

Stanford’s Bryce Love leads Power 5 running backs in rushing (164.4 yards per game) and has gone for 100 or more in 11 games this season to tie the school record. His 12 runs of 50 or more yards are an FBS record. He set a school record with 301 yards on 25 carries against Arizona State. With a bowl game remaining, he needs 47 yards to break the school record set by 2015 Heisman finalist Christian McCaffrey.

Houston defensive tackle Ed Oliver was voted the nation’s top interior lineman after making 69 stops from the middle of the Cougars’ three-man front. That ranks second in the nation among defensive tackles. He twice had double-digit tackle games and led the Cougars in tackles for loss (14.5), sacks (5.5), quarterback hurries (7) and forced fumbles (2). He had two double-digit tackle games this season.

Oklahoma State’s James Washington is first in the nation with 1,423 receiving yards, and his 20 career 100-yard games are tied for most in school history. He scored 12 touchdowns this season and has caught a pass in 44 straight games, the second-longest streak in the nation. He joins Justin Blackmon (2010 and ‘11 winner) as a Biletnikoff winner.

Utah’s Matt Gay leads the nation in most major kicking categories, including a school-record 27 field goals, field goals per game (2.25), field goal attempts (31) and 50-yard field goals (5). He has made 87 percent of his attempts.

Scott Frost, who took the Nebraska head coaching job after leading Central Florida to a 12-0 record and the American Athletic Conference championship two years after he inherited an 0-12 team, was named national coach of the year. … Iowa won the Disney Spirit Award for its new tradition of nearly everyone in 70,585-seat Kinnick Stadium turning to wave to the pediatric patients watching from across the street inside the Stead Family Children’s Hospital at the end of the first quarter. …  Oklahoma’s Mark Andrews won the John Mackey Award as the top tight end. … Ohio State’s Billy Price won the Rimington Award as the outstanding center. … Kentucky linebacker Courtney Love won the Wuerffel Trophy for community service.