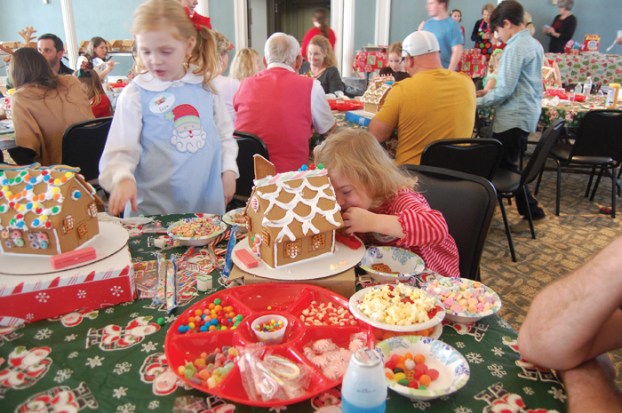 “It’s over 10 years,” Hirst said as she sat in the museum’s second-floor kitchen Sunday.

But Hirst does remember why she started it — her aunt, Ann Miller.

Miller, a local cake decorating legend, has been making royal icing for the gingerbread workshop since its beginning.

Hirst and Miller said they have to make the icing from scratch every year because the icing that comes with gingerbread house kits doesn’t keep the houses together.

“It falls apart when they start putting the candy and everything on because it’s still wet,” Hirst said. “… Because the kids get excited, and they want to go ahead and decorate them. Well, of course they do. You would, too. You wouldn’t want to sit there for two hours and wait for it to set up.”

Hirst said Miller’s royal icing can dry in less than an hour.

“They’re as hard as a rock,” Miller said.

But just to be safe, the Rowan Museum team constructed about 100 gingerbread houses several days before the workshop — which this year took place Sunday afternoon — so that the icing had extra time to dry.

The approximately 100 kids who came to the workshop with their families tested the strength of those houses, putting every variety of candy and snack that they could on the gingerbread structures.

One family, the Lipscombs, said they’ve been coming every year since their eldest daughter, Eliza, was old enough to participate.

Their younger daughter, 4-year-old Sallie, said she likes making gingerbread houses because they are “good-tasting.” She also enjoys putting pretzels on the sides to represent windows.

Their father, Erik, said he enjoys coming every year because he likes spending time with his wife, Katie, and two daughters.

Katie said she enjoys being together.

“And it’s not the hustle and bustle. It’s actually spending time together. So that’s the best part,” Katie said.