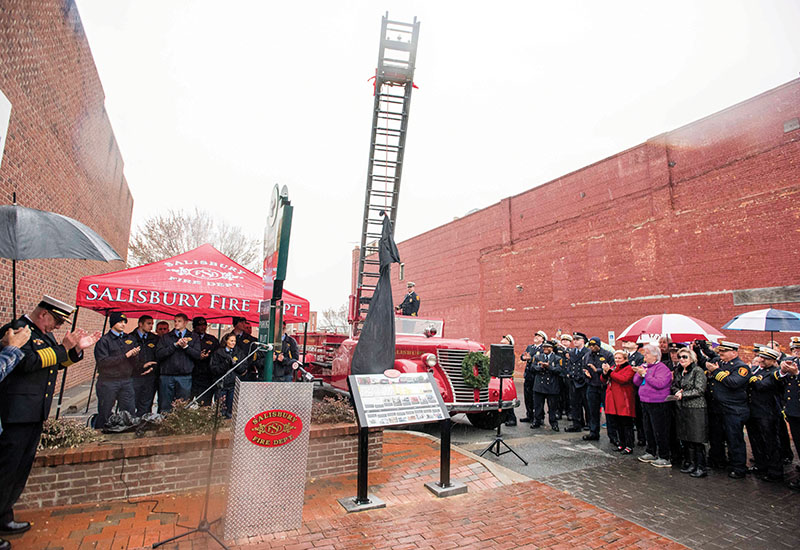 SALISBURY — On the site of the city’s earliest documented fire station, the Salisbury Fire Department unveiled a historical marker this morning and kicked off its 200th birthday celebration.

That 200th birthday recognition will culminate with a downtown firetruck parade tonight. Salisbury has one of the oldest documented fire departments in the state, going back to 1817.

To put it in perspective, Salisbury residents first came together to organize and purchase equipment for a firefighting effort in the town just 44 years after the Boston Tea Party and 44 years before the start of the Civil War.

Despite some rain and sleet, a good-sized crowd attended the marker’s unveiling in the middle of the 100 block of East Innes Street.

It stands at the entrance to the public parking lot on the north side. Through an informative timeline, it highlights some of the history of the department. The city’s recently restored 1941 aerial truck was used to lift up the covering over the marker.

A map near the marker’s top shows where a fire station is known to have stood at this same spot in 1885 and 1890, according Sanborn maps from those years. The town had a population of 3,800 in 1890, and a fire department that had a  double-tank chemical engine, a hook and ladder truck, three hose reels and 1,000 feet of 2.5-inch hose.

The South Lee Street Building still stands, though it stopped being a fire station after 65 years. Today, the Salisbury Fire Department has five stations, with plans for a sixth on the drawing board.

City Council members Tamara Sheffield and Karen Alexander were on hand in a crowd dominated by firefighters past and present. Many of the current men and women wore their dress uniforms.

On Dec. 8, 1817, 32 residents pledged $415 to the commissioners of Salisbury “to procure an engine and other fire apparatus as they may think necessary for the safety of the town.”

Parnell said it’s a good chance that wherever that pledge meeting was held and recorded, it probably was somewhere within 1,000 feet of where the historical marker was unveiled this morning, given the size of Salisbury at the time.

In 1855, the young fire department was reorganized to become Salisbury Vigilant Fire Co., to which anyone 18 or older could join.

Stoneman’s Raid toward the end of the Civil War burned the fire company’s hand wagon and hand pump on that wagon. “Many of the firefighters (probably) were glad to see them burn,” Parnell said.

To fight some of the fires then, men had to fill buckets at a water source such as the Tar Branch or Town Creek, pull the wagon to the fire, and after all the water was pumped onto the blaze, return to the water and start the process over.

“It was very arduous,” Parnell said.

In 1866, the town purchased a new fire engine, replacing what Stoneman destroyed. It included a hose carriage and 300 feet of leather hose.

In that same year, an African-American fire company was formed, consisting of about 30 men. Members were exempt from paying poll taxes in return for their services. A pair of downtown pumps also were installed — one at Boyden House and the other at the home of A.W. Buis.

Even with the rain and possible snowy weather tonight, the firetruck parade would go on, Parnell said. More than 50 units were scheduled to participate, though some of the older pieces of equipment may be held out of the weather, Parnell said.

After the parade, participants and the public are invited to Station 5 on South Main Street (next to Chestnut Hill) for coffee, hot chocolate, birthday cake and some award presentations.